Motorola isn’t quite done with the final design of its Moto 360 smartwatch, but the firm says it wanted to be present at the official coming out of Google Wear here at yesterday and today’s Google I/O in San Francisco. Funny thing is, many people are more interested in the smartwatches than they are in the OS that runs them.

I spoke with Motorola’s product marketing manager for the 360, Cathay Bi, who showed me what she could in the new wearable. The Moto 360 will soon be finished and ready to ship later this summer, Motorola says, and will come in black or silver metal.

The first thing you notice about the 360 is its round shape and spacious display. It’s a fine showcase for Android Wear, so I’m sure Google’s glad Motorola decided to show up at I/O. 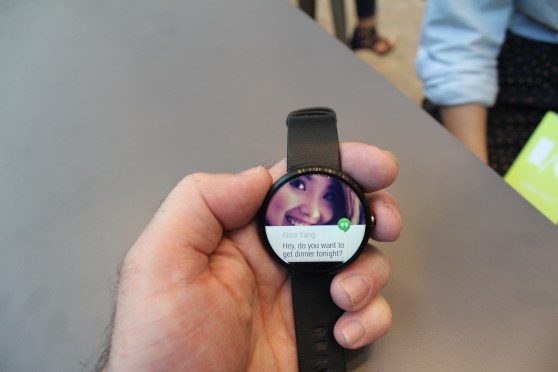 Bi was in the meetings where Motorola decided on the round shape of its smartwatch, which contrasts sharply with other new Android Wear-based devices from Samsung and LG, which are rectangular.

Motorola believes people want to wear a device on their wrist that looks like a real watch, Bi says. And most people think of watches as being round. “If you ask a little kid to draw a watch, he’ll almost certainly draw a round shape,” Bi says.

This seems to have been a good decision, because most of the people I’ve talked to here prefer the Moto 360 design over that of Samsung’s Gear Live and LG’s G Watch. Time will tell if consumers outside this building agree. 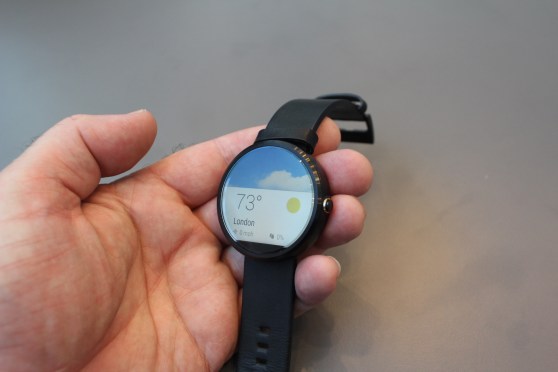 I’ve seen quite a lot of interest in what’s on the back of the smartwatches on display here. This is where the answers to questions about biosensing capabilities and battery charging are answered. But Motorola says it isn’t ready to talk about those things yet, presumably because it is now finalizing the details.

Given the level of secrecy, I believe that Moto is going to put some things back there that current smartwatches don’t have. This could mean a new and better way of charging the battery, or a series of biometrics sensors instead of just one, as on the new Samsung and LG smartwatches. 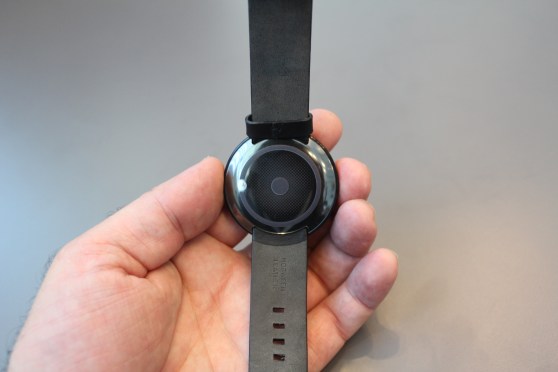 That battery-charging question in a big one. Battery life is the single biggest limiting factor in wearables innovation today.

Bi explains that there’s a great desire to put lots of sensors into smartwatches to collect all kinds of biometrics data. But the more kinds of data the device collects, Bi explains, the more processing power it needs to synthesize it all. Again you run into the problem of needing a bigger and bigger battery.

Motorola decided to get the size and shape of the watch right, then put in what components it could, constrained by the space needed for the battery, Bi says.

Bi assures me that the 360 will go well more than a day on one charge. Still, the watch does have some thickness to it (as you can see in the image below) to account for the size of the battery. 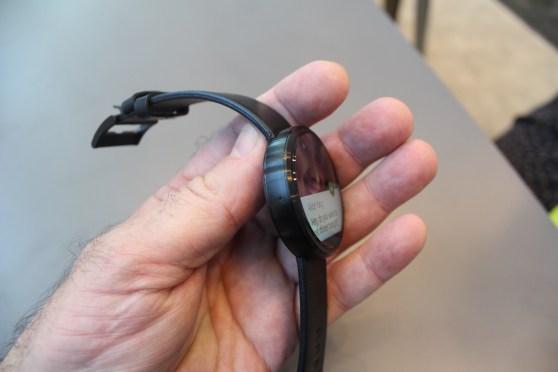 A large-ish button on the side of the 360 wakes up the watch from low-power mode. 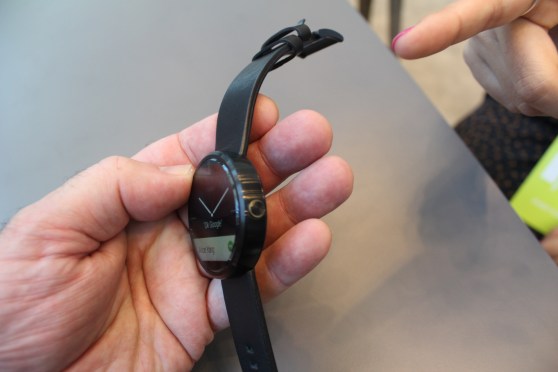 The 360 comes with a soft leather band that felt comfortable around my wrist. 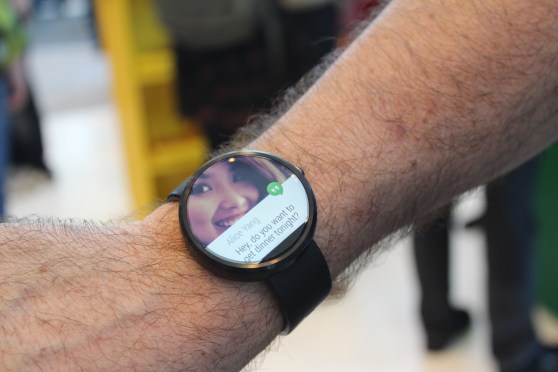 Above: Moto 360 looks more like an actual watch on your wrist.

I found that the display on the front of the 360 displayed the information “cards” that Android Wear OS uses in a clear and pleasing way. 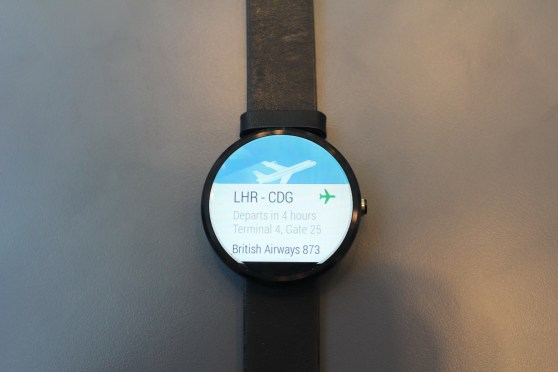 Motorola will be sending VentureBeat a 360 of our own in a few weeks. We’ll have a full review then.