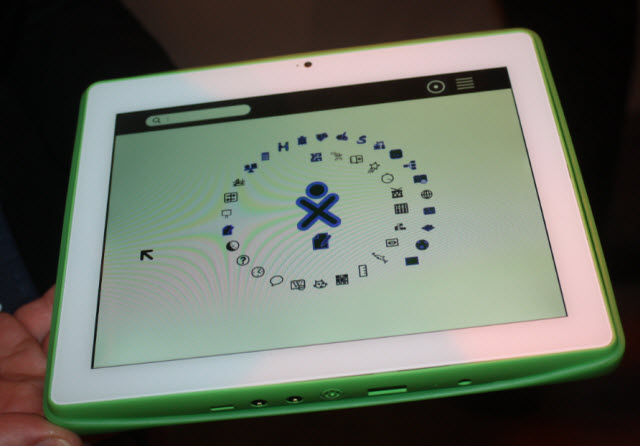 Of the major products unveiled at the Consumer Electronics Show this week, one of the most promising was the new  education tablet from One Laptop per Child. The nonprofit group, which has teamed up on the tablet design with Marvell, showed off its OLPC XO 3.0 tablet and said it was ready to start negotiations with governments or other bodies to purchase large numbers of the devices. 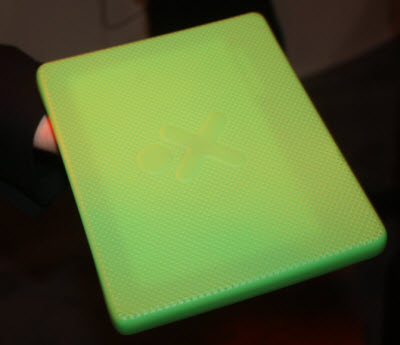 Is this the design that will finally get computing power in the hands of every child? So far, OLPC has shipped 2.4 million laptops to children in 42 countries and 25 languages, but its impact has been far short of its ambitions. Aimed at school children in developing countries, the tablet is the latest manifestation of former MIT Media Lab director Nicholas Negroponte’s dream of putting a $100 computer in the hands of every child on Earth. That idea has evolved from a laptop to a tablet, so it was good to see that the much-talked-about transition has finally taken shape. At CES, Marvell had working models of the design and showed us what the machine could do.

The obvious difference between this and the earlier laptop models is that this one is designed for touchscreen use. The Sugar desktop interface from earlier models has been adapted for touch operation. And the system can also run the Android operating system or Linux. The Sugar interface is somewhat slow when you fire something up with a touch on the screen.

This isn’t the prettiest tablet I’ve seen, but green and white look is one that kids might fancy. The screen is not particularly bright, but that’s intentional because the device is designed to operate on low power. The tablet’s cover has a 4-watt solar panel with an integrated battery. Since the tablet needs only two watts of power, the solar panel can produce twice as much power in an hour compared to what the tablet needs.

If you put the panel inside the green cover, it makes contact with four screws that act as contact power pins. You can use the hand crank to supply power as well. A minute’s worth of cranking can produce about 10 minutes worth of battery power. All of the power options recognize the fact that electricity sources aren’t always plentiful in developing nations.

The green cover forms a watertight connection so that it can withstand being dropped in water. After all, these are kids we’re talking about, and it would be quite sad if their prized possession failed to operate after it was accidentally dropped in water. The cover is also dust resistant.

The hardware specifications aren’t that impressive by modern computing standards. It has a 1-gigahertz Marvell Armada PXA618 central processing unit, 512 megabytes of main memory, an 8-inch liquid crystal display, and a green plastic case. The display has a resolution of 1024 x 768 pixels and uses the Pixel Qi technology that makes it readable even in direct sunlight. 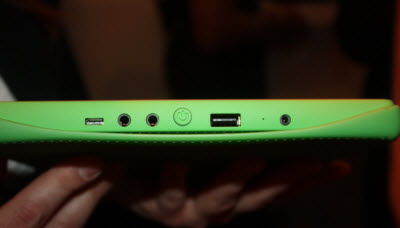 The Marvell processor allows for a significant decrease in power consumption. Marvell also provides an Avastar WiFi system-on-a-chip that gives the device connectivity. The system also comes with a good set of ports that include mini universal serial bus,  full-size USB, and dual 3.5 millimeter analog jacks.  You can use the mini USB port to charge the device.

The Sugar user interface comes with a bunch of applications, which you can access from a spiral icon wheel. The apps include everything from an oscilloscope to games that explain physics concepts. It has a Wikipedia encyclopedia that is accessible offline with a number of embedded images.

All in all, the tablet isn’t for every child in countries where people can afford to buy iPads. But it is very functional, well designed, and could very well be the device that takes off in the rest of the world.

Check out our video of a hands-on demo of the OLPC XO 3.0 tablet.