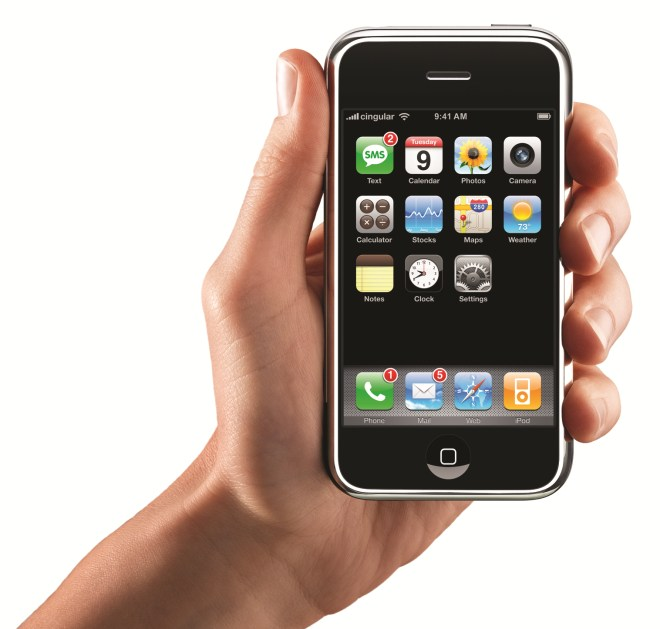 It’s hard to believe that it’s only been five years since the iPhone first launched on June 29, 2007. Looking back at it now, it’s striking just how much Apple gave us a glimpse at the future — one with touchscreen smartphones just about everywhere, location services at our fingertips, and all of our media stuffed into our phones.

“It will do much more than make calls and play music,” VentureBeat’s Editor-in-Chief Matt Marshall wrote when the first iPhone was announced (back when he was the only person writing at VB). “It aims to be a full-fledged smart phone, and is underpinned with some elements of Apple software, such as its Safari browser, which could expose mainstream users to Apple’s eco-system in more varied ways. This may radically rewrite the digital balance of power…”

Even if you’re a hardcore Android fan, it’s hard to deny the impact the iPhone has had on the mobile industry, and ultimately, on the technology world in general. Today on the iPhone’s fifth birthday, VentureBeat is taking a look back at the iPhone and reflecting on our earliest experiences with the landmark device.

I wasn’t present for the launch of the iPhone in 2007, because I was at the Consumer Electronics Show in Las Vegas. In a show of monumental arrogance, Apple had scheduled its keynote directly opposite the year’s biggest gadget tradeshow, and about 500 miles to the west of it besides. Those of us in the tech journalism business were forced to choose. I placed my bets on CES, choosing the enormous tradeshow full of dozens of vendors and hundreds of new products, which I figured would be more newsworthy than a small number of new products from a single, marginal vendor.

I bet wrong. As the news of the iPhone’s launch came out, a colleague of mine came up to me in the Las Vegas Convention Center and said, “Did you hear the news? Apple just made this entire industry irrelevant.” That’s an exaggeration, but on the other hand, the iPhone was far more significant than anything unveiled at CES that year, both in terms of its innovation and in terms of its ultimate impact on the industry. Apple may have been arrogant, but it was justified arrogance.

Like it or not, the iPhone did more than any other single product to reshape the smartphone business, and it caused a massive weakening of the carriers’ power too. It used to be that phones could only run apps that carriers made available to you, usually through hard-to-navigate, locked-down “stores” that were little more than obnoxious text menus filled with useless crap. Five years later, every smartphone has an app store, and people can install almost anything they want. Jailbreak your iPhone (or root your Android phone) and you can install absolutely anything you want.

That’s a huge shift in the market, and it’s hard to believe that it happened in just five years.

From the beginning, I thought the iPhone was an incredibly innovative device — but one that was for snobby Apple dorks, not me. I poked fun at the people who paid the ridiculously high prices for the first iPhones ($499 for the 4GB version, $599 for the 8GB), especially since it didn’t even have 3G. And who wants to type on a freaking screen anyway?! 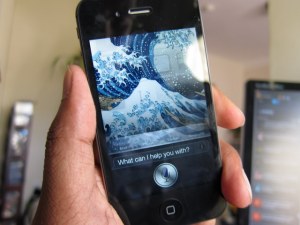 At the time, I opted instead for the Helio Ocean (RIP). It had 3G! It had two slide-out keyboards! Clearly it was so much better than Apple’s expensive toy. Boy was I wrong.

Once the Ocean started aging ungracefully, I pinned my hopes on Google’s fledgling Android OS. Google’s first Android phone, the T-Mobile G1, was in many ways a successor to the Helio Ocean and sparked my interest immediately. But it quickly became evident that Android didn’t launch fully cooked, and the G1’s slow hardware didn’t help the matter. So I waited.

When the iPhone 3GS finally launched, I jumped ship with a quickness. Sure, the AT&T service wasn’t great, even in middle-of-nowhere Massachusetts, but the iPhone 3GS was fast and polished. And with the ever-growing App Store, its potential seemed unlimited.

Since then, I’ve had my falling outs with the iPhone — especially with AT&T’s service when I moved to New York — but no other smartphone platform has managed to win me over. It’s only been recently that Android devices finally feel as polished as the iPhone, with the launch of HTC’s One devices and the Samsung Galaxy S III. But, for my money, the iPhone 4S with its killer camera and Siri integration, is still my favorite smartphone on the market.

When the iPhone first came out, I kept calling it a phone for girls. It was just so damn pretty, and the earliest adopters in my circle of friends were, in fact, female. So for that sexist reason alone, I avoided getting one at first. But then it came time to get rid of my Palm Treo and get a new phone. I gave in to societal pressure.

I’m glad I did. Talk about a game-changer. My iPhone 3G was so slick and amazingly designed — not just aesthetically but from a user-interface perspective — it seemed to have come straight from a sci-fi future, created by intelligent alien beings who can give me what I want before I even know I want it. I still think the iPhone is ahead of its time, and I’m glad it’s pushed mobile technology the way it did. 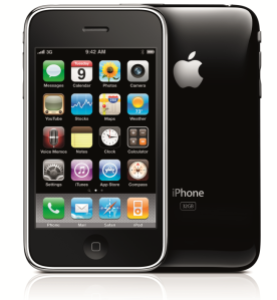 When the first iPhone was released, I didn’t immediately buy in. I thought it was undercooked, slow, and horrendously limited in scope. But once the iPhone 3G arrived and the App Store launched, my respect for the device and Apple ratcheted up considerably. As other device manufacturers tried to mimic Apple’s advances, the iPhone and its apps kept getting better.

I eventually chose the iPhone 3GS as my personal smartphone and have been rocking an iPhone ever since. While I love a lot of what Android and Windows Phone offer, I’ve stuck with the iPhone for several years because of the incredible app ecosystem and continued simplicity of the iOS user interface. As much as I love my 4S, I’m not loyal to a fault. To keep me as an iPhone user for my next purchase, Apple needs to bump up the screen size and add true 4G connectivity. We’ll see if it can deliver.

The iPhone changed the way my friends stand.

When the iPhone first came out, I had a Samsung Katana and jealously eyeballed my friends’ Blackberrys. The Blackberry defined the posture of all my classmates at that time: head down, a Starbucks latte in one hand, and one thumb twiddling with inhuman speeds on a keypad. The Blackberry made eye contact a rarity. I remember my friend looked at me during an intense BBM sesh and it was like our hearts became one.

Then my friend Mike got an iPhone. Then another popped up, and another. The touchscreen made one-hand-typing a chore, so the Starbucks lattes moved to the crook of the elbow. With two free hands, my friends started using their pointer fingers to scroll through websites, maps, e-mails, and apps. More importantly, people started sharing what was on their screen. The hunched back gave way to “the lean,” where people leaned over to point out all the shiny new things they could do (a ruler on your phone?! LET’S MEASURE EVERYTHING).

Where the Blackberry made you look in-the-know, the iPhone let you prove you were in-the-know. It let you help your poor, Katana-wielding friends become in-the-know. The iPhone changed the way my friends stand: that’s a powerful piece of technology.

I was one of the first people to get the first iphone. The funny thing is, I really did not want it. I was attending a conference that got a special deal to buy the first batch of phones. $600. Ug. I was going to sell it after the conference, only to have the price drop on me. So as I fought with AT&T to get my $200, I found that it was not bad… Then came jailbreak and everything changed.

I was a treo 650 user for a long time. Loaded all kinda of cool games, had it connected to a remote bluetooth GPS so that I had voice and visual directions, and of course could surf the web, hacked it so I can take movies. It was good. Then came the jailbroken iphone. Amazing. And I have never looked back. (Read more.) 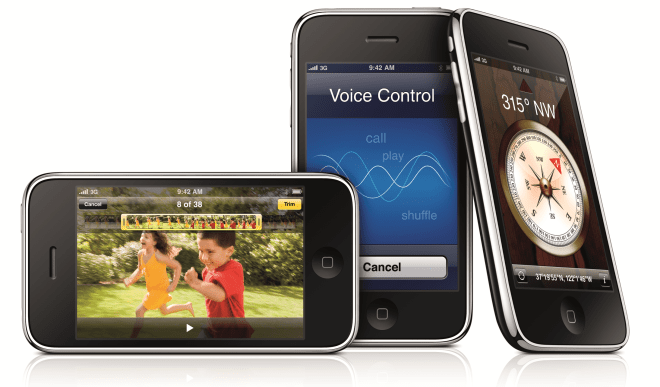 I can’t think of the iPhone without remembering Steve Jobs’ magical introduction:

And he repeated it several times, faster and faster, as the crowd became more and more excited and the on-screen graphic morphed from a graphic iPod, phone, and communicator quicker and quicker.

Then he said, “Are you getting it?” and the crowd roared as they got it. “This is not three separate devices,” Jobs said.

The device, of course, was one, and it was iPhone. And it was an extraordinary device — it was like an alien artifact from a technologically superior civilization dropped down to mere mortals. And the Apple cargo cult was reignited.

iPhone changed the world. It changed everything about technology. And it blasted the concept of design as competitive advantage right onto the front burner of every company in the world that had a pulse.

Now … I want Apple to do that again.

I’ll never own an iPhone.

This I write from my Macbook Pro, my second Apple laptop and likely not my last. I also own an iPod Touch, so my iPhone avoidance is not Apple avoidance.

Instead, my rationale amounts to this this: I am of a very particular class of m 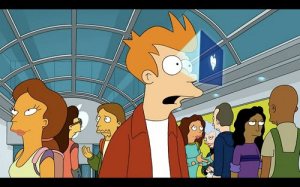 asochistic people that distrusts ecosystems. I am horrified of being locked into one company’s ideal vision of absolutely trapped users. This is why I use Gmail, Google Reader and Google Docs, but not Google search. (It’s also why I can’t will myself to trust or invest in Google+, and why I eye my Nexus S with varying levels of contempt.)

Plugging into one company’s ecosystem means surrendering yourself entirely to their decisions and motives, and when you write about technology for a living, exploring and keeping an open mind are vital skills.

(I won’t on any level deny that the iPhone is an absolute gem of a device, and that it’s rightfully the lens through which basically every other smartphone should be viewed.)

My line of thinking has its obvious flaws: Failing to plug into an ecosystem makes life a bit more difficult — and I acknowledge that. But the ability to spread my technological investments beyond that of a single company’s ambitions means more to me than convenience and simplicity.

Which is why you’ll never see an iPhone in my hands. There’s a whole world outside Apple.