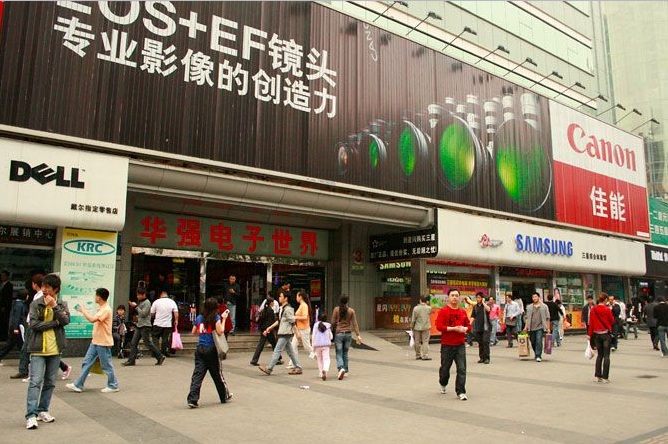 I go to China every four or five months for work. I have to visit all the corporate headquarters in Beijing and Shanghai, but the highlight of every trip is the day I spend at Hua Qiang Road North in Shenzhen. Pretty much every piece of electronics we use today is sourced and manufactured within 100 miles of Shenzhen, and Hua Qiang is the city’s electronics shopping district.

On my last trip, in July, I met a ‘procurement’ consultant, and he told me which of the 50 mega malls in the area to visit to buy tablets.

In the US, when we talk about tablets we usually mean the iPad and increasingly the Kindle devices, but beyond that there is not much else in the market. I had heard that tablets in China had already reached low price points. You can buy a reasonable Android phone for $100 retail, and I wanted to see if I could find a $150 tablet. This consultant pointed me to a mall filled with hundreds of stalls selling nothing but tablets. I walked into the middle of the scrum to a random stall. I pointed to one of the devices on display and asked, “How much for this one?” 300 kuai. My Mandarin is a bit rusty, so I had to ask again. Slowly, the stall owner repeated renminbi 300 yuan.

If this were a movie, the lights would have dimmed and all the activity in the room frozen. 300 renminbi is US $ 45. And that was the initial offer price given to a bewildered foreigner in China, no haggling. I felt a literal shock.

I bought the device and did some more research. This was a 7-inch tablet, Wi-Fi only with all the attributes of a good tablet. Capacitive touchscreen. Snappy processor. Front facing camera. 4GB of internal memory and an expandable memory slot.

I later found out that these devices are now all over the supply chain in Shenzhen. At volume, say 20,000 units, you can get them for $35 apiece. My device ran full Android 4.0 Ice Cream Sandwich and had access to the full Google API, including Gmail, Maps, YouTube and Google Play (not quite sure how that works either).

Once my heart started beating again, the first thing I thought was, “I thought the screen alone would cost more than $45.” My next thought was, “This is really bad news for anyone who makes computing hardware.”

At these levels there is almost no profit margin left in the hardware business. A $45 tablet is cheap enough to be an impulse purchase at the check-out line in Best Buy. A $45 price puts tablets within reach of a whole host of other activities not traditionally associated with computers. Tablets could be used by waiters in restaurants. By mechanics in auto body shops. By every nurse in a hospital. By pretty much any category of work that today needs a computer but where PCs are too expensive to be deployed. These are also devices built entirely for commercial reasons, no government backing, no academic sponsor, no proof-of-concept.

This trend is not entirely surprising. Vivek Wadhwa wrote about the potential for these devices just last week here on VentureBeat. In my own research, I’ve been writing about the impact of low-cost devices from China for several years. But I think we have been dancing around some of the implications.

The truth is that if your company sells hardware today, your business model is essentially over. No one can make money selling hardware when faced with the cold hard truth of a $45 computer that is already shipping in volume.

My contacts in the supply chain tell me they expect these devices to ship 20 million to 40 million units this year. Most of these designs are powered by a processor from a company that is not known outside China — All Winner. As a result, we have heard the tablets referred to as “A-Pads.”

When I show this tablet to people in the industry, they have universally shared my shock. And then they always ask “Who made it?.” My stock answer is “Who cares?” But the truth of it is that I do not know. There was no brand on the box or on the device. I have combed some of the internal documentation and cannot find an answer. This is how far the Shenzhen electronics complex has evolved. The hardware maker literally does not matter. Contract manufacturers can download a reference design from the chip maker and build to suit customer orders. If I had 20,000 friends and an easy way to import these into the US, I would put my own name on it and hand them out as a business cards or Chanukah gifts.

I think this leads to an important conclusion: No one can make money selling hardware anymore. The only way to make money with hardware is to sell something else and get consumers to pay for the whole device and experience.

Obviously, Apple sells more than just hardware. It sells iOS. It sells the Apple Brand. It sells the ability to give someone over 60 an iPad and not require nightly IT support calls from that person. It sells a bit of magic. And people will pay $400+ for that.

Amazon is also clearly way ahead on this model. At the Kindle launch event last week, Jeff Bezos highlighted that Amazon does not make money on the Kindle, it makes money on the content it sells on top of the Kindle. There is a growing awareness of this model in the web. For instance, I think Jon Gruber hit the nail on the head in this post on Apple’s business model versus Amazon’s. Consultancy Vision Mobile also wrote recently about this trend.

The next step is for more companies to enter the fray, and by companies I mean people not usually associated with electronics.

I expect to see more retailers step in. Toys ‘R Us entered the market this week with its tablet for kids. I imagine Walmart with all its investment in Walmart Labs and Walmart.com is thinking about launching a tablet. In fact, I’m a bit surprised it hasn’t launched one already. And if Walmart, why not Target?

At $45 retail, we will probably start to see tablets become giveaways. Open a checking account and get a tablet with your bank’s app preloaded. Sign up for an insurance policy or a stock-trading account, get a tablet to submit claims or day-trade. To be clear, I do not think we are moving to a world of single-purpose devices. Quite the opposite. But I do think the market will now support a lot of experimentation around services built on top of cheap tablets.

In the PC world 10 years ago we encountered similar trends. It was very hard to make money selling hardware, so HP and Dell ended up making most of their money selling pre-loads for AOL and other online services, or through marketing funds from their suppliers. This time around, the gains will be even further dispersed. HP and Dell could hide behind their PC distribution models and brands. This latest wave of A-Pads will strip away even those minor barriers.

Offsetting the declines I expect from the hardware OEMs (or branded manufacturers), there is some good news for component suppliers. Companies with innovative features in silicon or very tight cost structures will benefit. As product cycles tighten (and we had quotes for 40-day turnaround times), the supplier with the right technology, available right now will benefit. Companies like Broadcom, Qualcomm, and Skyworks, which make the various Wi-Fi radio components, should see steady growth in volume demand, which could more than offset declines seen at some of their larger customers.

We are much closer than most people realize to a major tipping point in the industry. It is time for many to find a new business model.

Postscript
I thought discovering the A-Pad was pretty exciting. So I was dismayed to find that the week after I got back from China, a device that looks a lot like my A-Pad was on sale at Fry’s Electronics for $79. No brand listed. The process has already begun.

Jay Goldberg is a financial analyst with an investment bank. He has been working with tech companies for ten years. Prior to that he lived and worked in China for almost 10 years.