Dr. Steven LeBoeuf is the President and co-founder of Valencell and an expert and pioneer in precision biometric data sensor technology,

The market for fitness wearables is strong, but remains niche.

According to a Gallup Healthways Well-Being Index, nearly 125 million Americans exercise regularly, the majority of which track their performance and are looking for convenient, motivational ways to measure their progress.

Wearable activity trackers and fitness monitors have grown from stand-alone, single-function units to multifunctional smart devices. Pedometers that once only measured footsteps, now have many features to estimate sleep quality and even determine one’s activity type (running, walking, cycling, etc.).  However, the sales of activity trackers, while growing, only hover around a few million units per year.

Perhaps therein lies the disconnect. Activity trackers only track what your body is doing, not how your body is responding to what you are doing. It is the unique combination of accurately assessing one’s actions and the body’s response to those actions that makes for a truly compelling user experience.

Maybe that is why Endeavour Partners found that one-third of American consumers who have owned a wearable product stopped using it after six months. Consumers are craving a wearable that autonomously monitors their activity and biometrics and seamlessly fits into their daily routine. The industry hasn’t produced a wearable device that will make consumers turn around on the way to the gym if it were left behind.

Accelerating consumer adoption of wearables requires minimizing the need for a change in behavior. In a recent consumer study conducted by Jacobs, Jenner & Kent Research, nearly three out of four frequent exercisers wear an audio headset while working out. Powering these headsets with biometric wearable technology will open the door to mass consumer adoption.

The latest developments in optomechanical sensor technology have made this a reality, turning audio headsets into “hearables”: smart wearables worn at the ear. A growing number of sports audio headsets now contain biometric sensors that fit within earbuds and continuously measure heart rate and other critical biometrics. This technology has been proven to be extremely accurate, even during the most strenuous workouts, and does not require an additional sensor on the user’s chest; it’s all in the ear.

Moreover, the ear turns out to be a physiological playground for biometric monitoring, containing information about heart rate, respiration rate, blood pressure, and more. Because the human ear is not involved in aggressive physical activity (unlike the case for the arm, wrist, and leg), motion artifacts can be thoroughly removed with existing optomechanical technology, and biometric wearable earbuds are as accurate as chest-straps during aggressive exercise.

Audio headsets are the only fitness wearable with a clear solution for the infamous “death by discharge” issue. Consider Fitbit’s activity trackers. These devices can take more than an hour to charge. Once charged, the battery lasts for only a few days. As a result, once the battery is dead, the tracker is often thrown into the sock drawer, never to be used again. In contrast, wired biometric earbuds do not require charging, pulling power from audio plug of the smartphone. The wired hearable is always ready for action.

The opportunities for hearable products are not limited to the fitness industry. Consider the enormous gaming industry, where headsets are also commonly used. Earbuds with biometric sensor technology could potentially allow gamers to transform the state of a character or play in response to their physical mood. For example, a state of relaxation may improve the gamer’s shooting accuracy, or a state of anger may increase the gamer’s strength.  Biometrics could also play a role in shaping a user’s avatar in more social gaming environments.

Additionally, hearables could be applied to multimedia applications for headsets that listen to voice commands. Combining biometric sensing with ear-based speech recognition technologies, such as the “Jarvis” technology recently demonstrated by Intel, a new era of user interfaces can be realized.  Imagine, for example, if the Jarvis digital assistant could adapt to the user’s stress state (in the manner a real live person would adapt to your facial gestures) and change its tone or word choice in response to the user’s mood.

As market players in the exploding wearable market grapple with how they will leverage this technology, and more brands look to take a piece of the $1.4 billion market, the ear will play a significant role. There is no denying it: earbuds are the right device at the right place at the right time. 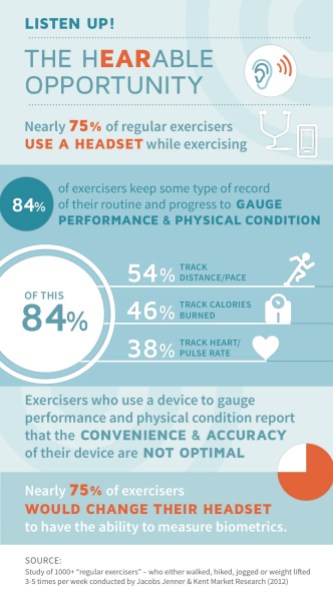