Helicopter drones are now working in tandem with driverless cars.

That’s the gist of a massive experimental undertaking that will pair a Sikorsky Blackhawk helicopter, the helicopter of choice for the U.S. military, and a driverless off-road vehicle.

This is a controlled experiment that will show how the two can work in concert to survey a fictitious ground site contaminated by radiation. The success of the program has broad implications for civilian, military, and law enforcement applications.

While drones have become nearly commonplace in the American lexicon and a controversial reality in the air, a pilotless helicopter and a driverless car working under the same aegis is rare.

The 18-month study illustrates the serious potential for driverless and remote-piloted vehicles, according to Jeremy Searock, a program manger for the NREC.

“This is an new opportunity for an unmanned aerial vehicle and UGV (unmanned ground vehicle) to autonomously work together to accomplish a mission which is only possible as a team,” Searock, a military veteran, said.

CMU said the Extended Operational Reach with Autonomous Air and Ground Vehicles project will be led by NREC and is sponsored by the TARDEC through the Robotics Technology Consortium. 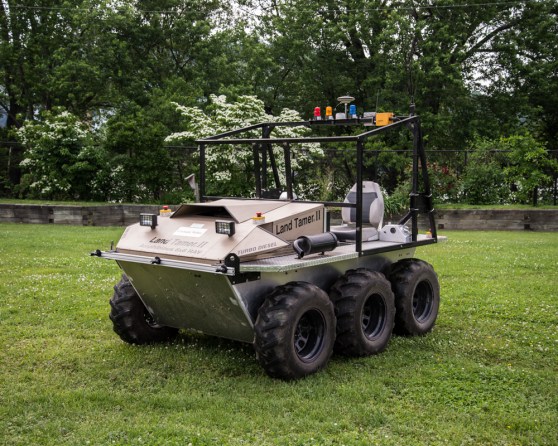 The extraordinary pairing calls for the Blackhawk carrying the driverless car in a sling underneath its 8,000-pound-carrying belly and fly it to a remote site. Once on the ground, the car will begin “surveying” the fake contaminated area, while the whirlybird returns to base.

“Our autonomous vehicle team will provide the Army with the capability to collect information on the ground while keeping soldiers hundreds of miles away,” Searock said.

The driverless ground vehicle is actually a modified Land Tamer all-terrain vehicle that uses sensors and computers to drive and position itself and has been used in numerous experiments but not in coordination with a drone.

As for the Sikorsky, it uses what the company calls its “autonomous mission manager” that allows for automated flight in all different types of weather conditions. Its radar and computer systems enable it to land and take off by itself. Sikorsky is spending heavily on the technology because it believes pilotless aircraft will someday ferry soldiers and supplies to the battlefield.

The project culminates in the final experiment next September at Sikorsky’s massive testing facility near West Palm Beach, Fla., when the helicopter delivers the Land Tamer to the prearranged site.

As for Searock, he said one of the attributes of the project that excites him is vehicles taking the place of humans in dangerous environments. “As a former military officer, I am always proud to provide new capabilities to keep soldiers safe.”