We’re counting down the hours until Apple’s Worldwide Developers Conference keynote today, but as usual, details are beginning to leak out.

UPDATE 11:45 a.m. Pacific: Here’s what iOS 7 really looks like, based on screenshots from Apple’s WWDC conference.

Apple’s next mobile operating system, iOS 7, is expected to be the highlight of the conference, and now we have a look at its revamped design. 9to5Mac’s Seth Weintraub has had a look at iOS 7, and while he couldn’t nab a screenshot (for security reasons), the site has mocked up some of the new icons and design elements based on his description.

At first glance, it looks like all of those rumors of Apple’s Jony Ive pushing a flat design for iOS 7 were accurate. The new icons are cleaner and aim for minimalism, compared to the detailed and colorful icons we’ve seen on the OS so far. As for other key differences, cellular reception is now indicated by five dots instead of bars, and the dock icons are separated by a simple transparent line.

Additionally, Weintraub notes that there are light and dark color schemes for the icons and the iOS keyboard. It’s unclear if this is a slight variation for different colored iPhones, or if the icons will change color depending on something like the time of day or ambient lighting. (Darkening the color scheme would be a great way to make iOS more usable in low-light environments, on top of the iPhone’s existing automatic screen brightness setting.)

While the new icons look nice, hopefully Apple managed to bring in some killer new features in iOS 7 as well. Check back at 10 a.m. Pacific today for our WWDC live blog. 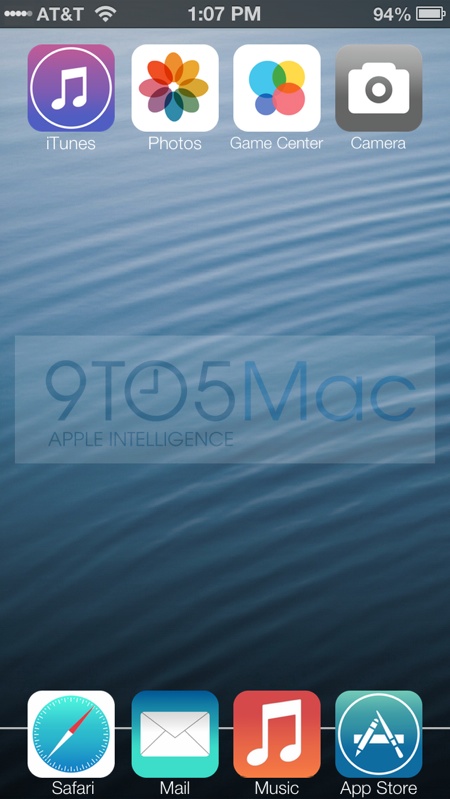