LAS VEGAS — The biggest technology company in the world, Samsung, trotted out a wide array of new and sort-of-new products and services during a packed press conference at the Consumer Electronics Show on Monday.

What we didn’t see

Many, like me, found the presentation to be an underwhelming showing for Samsung, which usually reserves some major product announcements for CES.

Samsung didn’t introduce any new smartphones (sorry, no Galaxy Note 6), smartwatches, or tablets at the press conference, but rather was content to crow about its performance in those categories during 2014. The company says it has “outperformed the market” in tablets with its Galaxy Tab line, in smartphones with the Galaxy Note 5, and in smartwatches with the Gear S.

Samsung really is far ahead of its peers in smartwatches, being already on its third generation of the devices. Samsung says it now controls 60 percent of the smartwatch market. This, of course, could change instantly with the introduction of the Apple Watch in 2015. 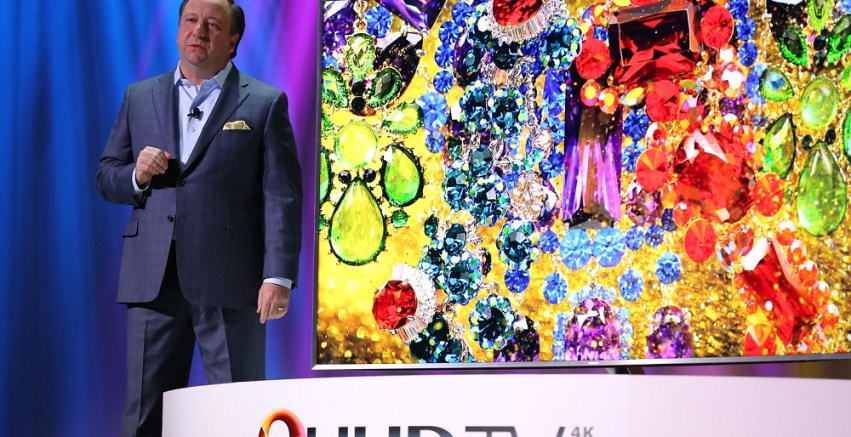 Samsung says it now has more than 500 UHD titles, and now controls 60 percent of the UHD (Ultra HD) market. The company believes the proportion of UHD TVs to regular large TVs will grow by four times in the next year, representing a large opportunity.

Further, half of the UHD TVs sold today curvy-screened TVs, Samsung says, a stat that seems to validate Samsung’s decision a few years ago to bet heavily on curved designs. 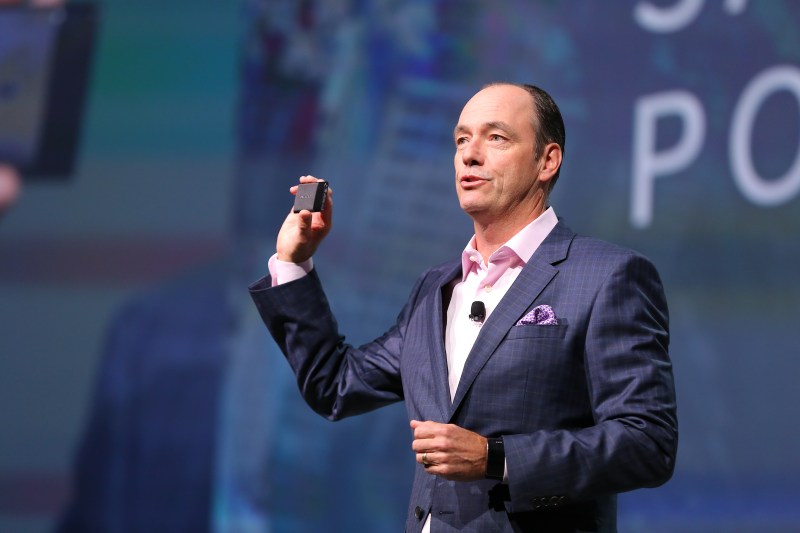 Samsung expanded its Milk music service to include video during 2014. Now, the company says it will integrate Milk Video with the Gear VR virtual reality headset that it built with Oculus Rift. The service will provide a “daily stream of music and video” to VR users, and will make the Gear VR a mainstream consumer product, Samsung believes.

The Gear VR, which is powered by Samsung’s Galaxy Note smartphone, has been available for several months now, and the Milk VR app can now be downloaded at the Gear VR stores.

Perhaps the biggest announcement of the press event was a “new” Samsung display technology called SUHD. Samsung Electronics America VP Joe Stinziano said its latest displays are brighter and more colorful than any other display on the market. The new 88-inch JS 9500 TV will be the first to contain the new SUHD display. 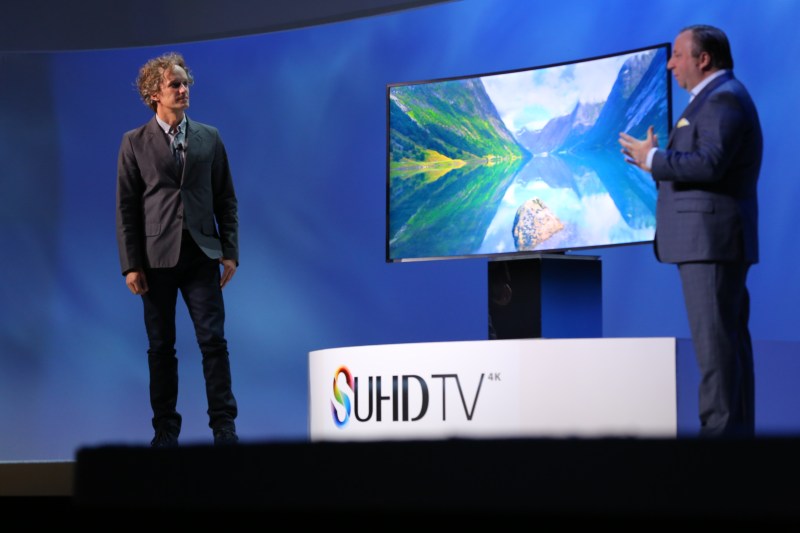 Above: Designer Yves Behar appeared onstage here to talk about his design for the new SUHD TVs.

The SUHD display uses nanocrystal semiconductors that transmit different colors of light, depending on their size. Samsung says the displays have 64 times the color expression of normal TVs.

The well-known designer Yves Behar appeared onstage here to talk about his design of the new SUHD TVs. He said the design is based on the idea of a “fine curved blade.” And indeed, the TVs do use a shiny metal material that looks like polished steel.

Tizen in the TVs

Samsung said all of its new TVs will now be powered by its Tizen operating system. Tizen will also be the OS for Samsung’s 2015 TV Hub, which serves up high-definition on demand movies and other video content.

A new Samsung Audio Lab has opened in Los Angeles, which has been helping develop new Samsung speakers that distribute sound from all sides of the speaker, not just the front.  Samsung says the Milk music app will soon be more closely integrated with Samsung audio speakers, enabling users to select music and play it on Samsung speakers throughout the house. 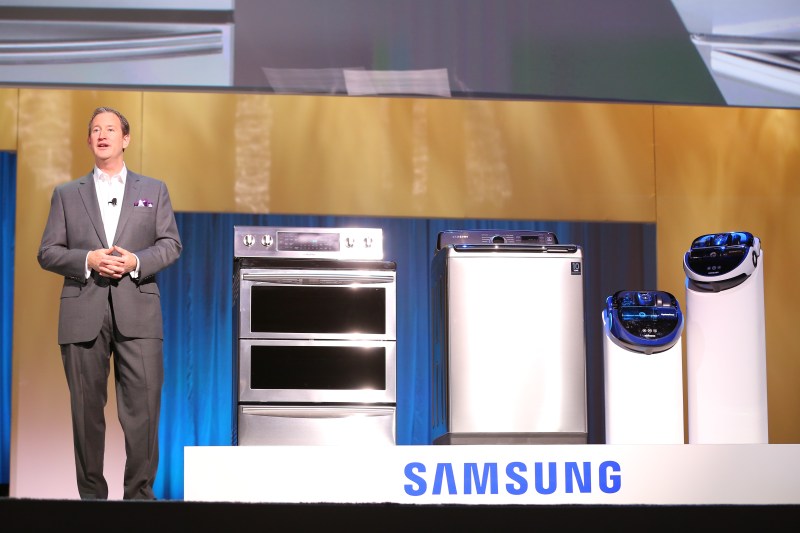 The cooking and washing

To round out the press event, Samsung’s John Herrington announced a couple of new cooking products, including a dual-door oven range, which apparently allows for cooking two dishes at different temperatures at one time (not exactly innovation).

And then, Samsung announced a strange new ActiveWash washing machine that has a sink built into its top. This, I’m told, is used for soaking garments with particularly tough stains.

The Internet of Dreams

Later, at a separate event during the opening keynote for CES 2015, Samsung chief executive Boo-Keun Yoon proclaimed that, “in five years,” every single one of Samsung’s products will be an “Internet of Things” device.

After Yoon made that promise, he brought SmartThings chief Alex Hawkinson on stage. There, Hawkinson announced that the company’s new smart-home “Hub” will work even if your Internet or power goes down. Even later, Yoon announced Samsung’s plans to invest $100 million in the developer community for “Internet of Things” apps.