Over the past decade, Apple’s computers have gone from niche to mainstream, thanks largely to growing adoption of Mac laptops and iPad tablets as adjuncts to increasingly popular iPhones. Fortune 500 businesses that once issued only Windows PCs now either purchase or allow employees to self-provide Apple computers, and though Apple’s comparative PC market share isn’t huge, the company has become a juggernaut. Just ahead of its 2020 Worldwide Developers Conference this month, Apple today became the first U.S. company to surpass a $1.5 trillion market cap, and its component changes can disrupt major suppliers — including longtime Mac CPU provider Intel.

Apple’s intention to transition away from Intel’s processors for Macs has been well documented for over two years, and the stated reason — dissatisfaction with the chips’ performance and manufacturing process gains — has only become more pronounced over time. MacBooks, iMacs, and Mac minis have seen only small year-over-year speed boosts from Intel chips, while high-end iMac Pro and Mac Pro desktops have struggled to find next-generation Intel CPUs to adopt. Meanwhile, Apple’s latest ARM-based iPhones and iPads have opened up wide performance leads over their rivals, so it’s no shock that Macs with ARM chips are on the way.

One key to Apple’s success is an internal chip development division with the wherewithal to push the entire industry forward. The other key is its tight partnership with TSMC, a Taiwanese chip fabrication company that is willing to pour billions of dollars into the R&D and manufacturing gear necessary to keep shrinking chips below prior limits. TSMC is now one of only two companies in the world actively racing towards a 2-nanometer manufacturing process, and South Korean rival Samsung hasn’t yet revealed its plans. Intel is much further behind in making chips that small, having struggled to commercialize 10-nanometer chips.

There’s a reason companies care so much about commercializing the tiniest possible chip manufacturing technologies. Smaller nanometer numbers enable more transistors to fit inside a given chip footprint, leading to chips that are (a) smaller and equally powerful, (b) more powerful at the same size, or (c) simultaneously somewhat smaller and somewhat more powerful. Holding everything else equal, a 2-nanometer chip will consume less power, run cooler, and require less space than an otherwise identically equipped 10-nanometer chip — potentially cutting each factor by four-fifths. Believe it or not, these changes will enable laptop-caliber chips to fit inside regular-sized glasses frames five years from now. And there’s actually a roadmap to make that happen.

TSMC’s timetable and Apple’s commitment to be first to commercialize each new chip process collectively provide some visibility into where Mac, iPhone, and iPad processors are headed for the next five years. The companies have been on a predictable release cadence for years now, together releasing the 16-nanometer A10 (2016), 10-nanometer A11 (2017), 7-nanometer A12 (2018), and 7-nanometer A13 (2019). By the end of this year, TSMC and Apple will commercially release the first 5-nanometer chips, almost certainly under the “A14” name. TSMC has promised its first 3-nanometer chips in 2022 — likely the A16 — and is aggressively developing a 2-nanometer process for either 2024 or 2025.

It’s important to understand, however, that Apple’s chip development ambitions aren’t limited to a single class of processor. There are already three types of Apple CPUs, and that number will soon go up to four or five to support the Mac’s transition away from Intel, then increase again to support future Apple smart glasses. The categories are as follows.

A-series: Standard A-series chips are always used in iPhones, and occasionally in other Apple devices such as the iPad, iPod touch, HomePod, and Apple TV. They’ve been balanced from their earliest days to achieve power-efficient performance. 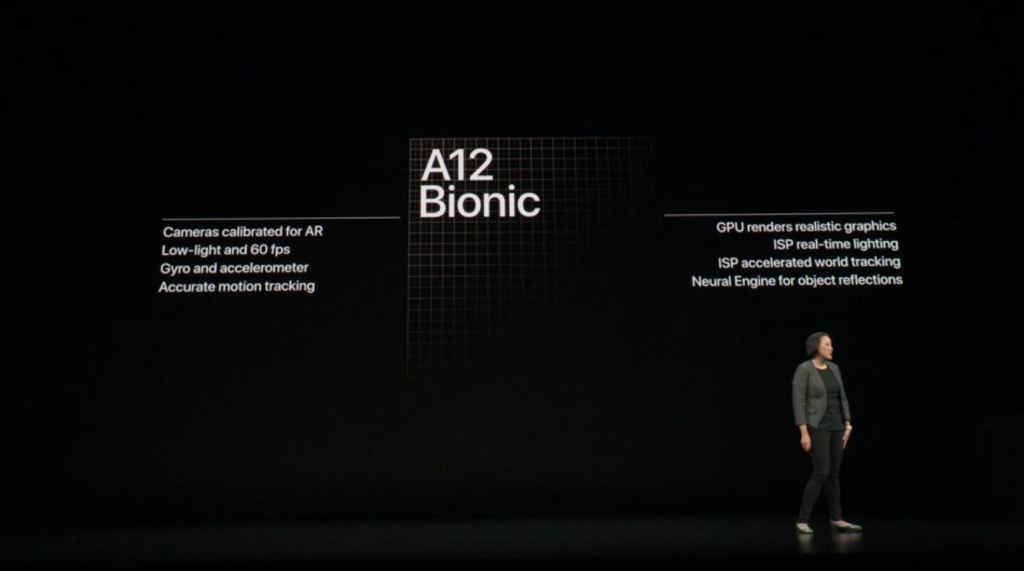 A-series X/Z: The A5X, A6X, A8X, A9X, A10X, A12X, and A12Z were originally developed for iPads but are occasionally used in Apple TVs. They are balanced to deliver superior horsepower to standard A-series chips while also using more energy and consuming more physical space. The “X” suffix was consistent across all of these high-performance iPad chips until the release of the 2020 iPad Pro, which moved to a “Z” suffix. 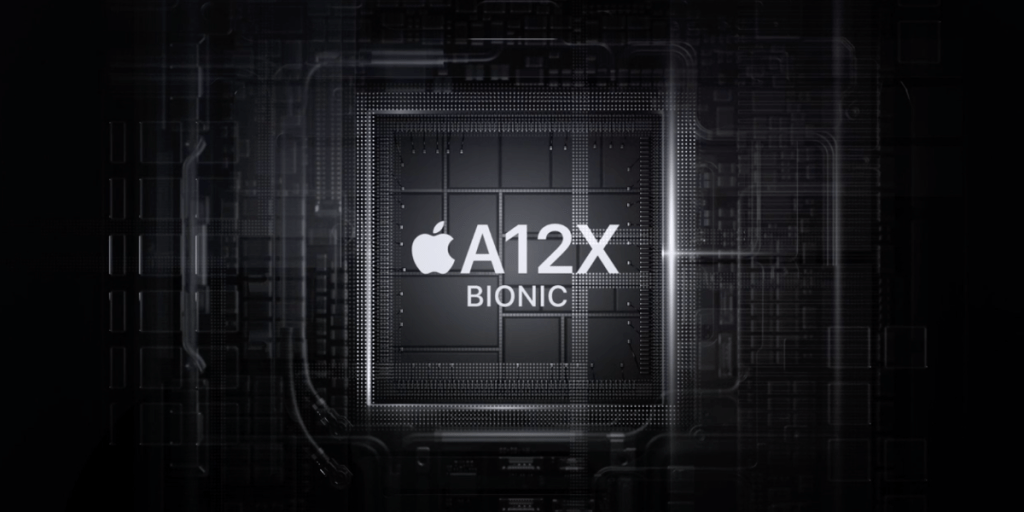 Above: Apple’s latest A-series chips contain CPU and GPU cores designed by Apple but don’t have cellular modems inside.

S-series: The S1 through S5 system-on-chips power the Apple Watch family of smartwatches. At the center of each is a pared-down variant of an older A-series chip, designed to occupy even less space and consume less power. However, the CPU doesn’t necessarily use the latest TSMC manufacturing processes, as Apple and TSMC have seemingly reserved each new process’s initial production capacity for iPhone and/or iPad chips. For instance, the 2015-vintage S1 used a 28-nanometer manufacturing process when iPhones were using 14- and 16-nanometer chips. But the process used for each subsequent S-series chip has remained ambiguous. 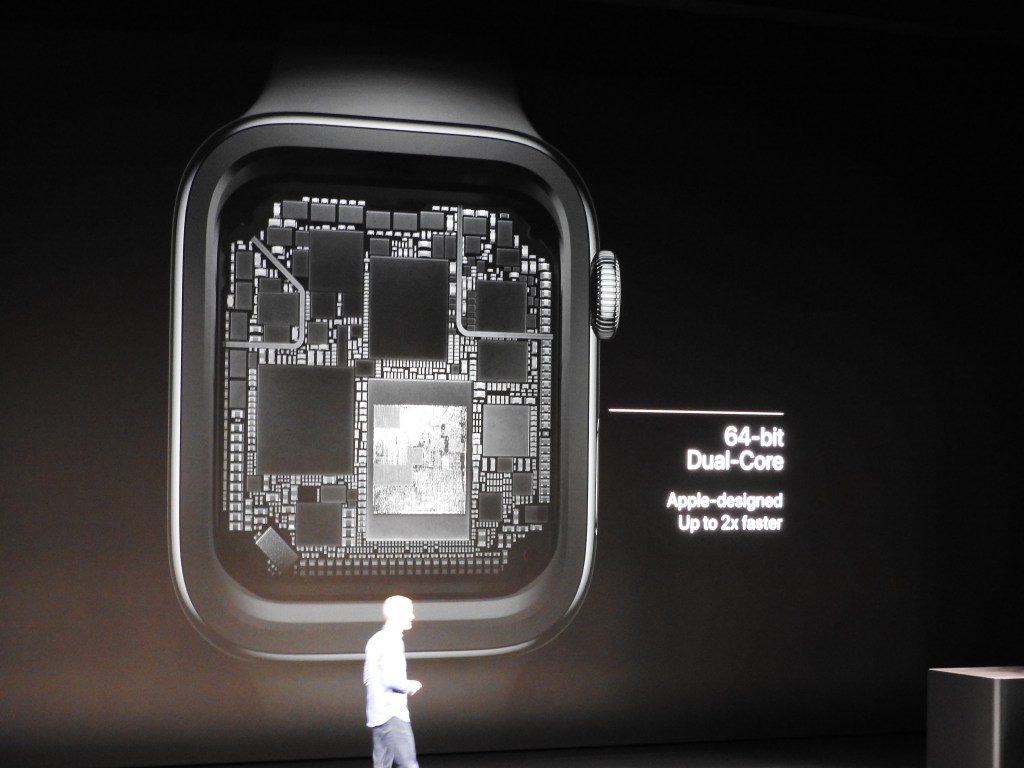 Mac chips: Though it’s not impossible, it’s unlikely that Apple will merely reuse existing iPhone or iPad chips in Macs. The company is reportedly working on 5-nanometer Mac chips featuring up to 12 CPU cores, with future plans to offer chips with more than 12 cores. This suggests to me that there could be two lines of Mac-specific ARM processors, one destined for laptops and laptop-class Macs, and the other for super high performance desktop Macs akin to the iMac Pro and Mac Pro. Whether Apple goes with X-series, Z-series, or some other type of branding for these Mac ARM processors remains to be seen.

In each case, Apple will be targeting a platform-optimized balance of performance and power. The smaller the device’s battery and the greater Apple’s ambition to shrink or thin that form factor, the less raw horsepower the chip will deliver. Conversely, where battery life and chip size aren’t major considerations — in desktop Macs, for instance — the chips can go off to the races, eating as much energy as necessary to accomplish their tasks, constrained only by cooling and desktop form factors. Due to Apple’s aggressive performance-per-watt energy optimization designs, neither of those issues is likely to limit the company’s ARM chips to the degree it felt shackled by Intel’s desktop and laptop CPUs.

With the caveat that everything is subject to change due to engineering issues and pandemic considerations, here’s what I broadly expect to see Apple do with chips over the next five years.

2020: A 5-nanometer A14 for iPhones, an S6 for Apple Watches, and possibly a 5-nanometer A14X for iPads (more likely 2021). Unless it plans to use the A14X for Macs, Apple will preview a separate entry-level Mac laptop chip to developers ahead of a 2021 commercial release.

2022: A 3-nanometer A16 for iPhones, an S8 for Apple Watches, possibly an A16X for iPads, second-gen Mac laptop and desktop chips, and possibly a 5- or 3-nanometer Apple-developed smart glasses chip.

2023: A 3-nanometer A17 for iPhones, an S9 for Apple Watches, possibly an A17X for iPads, third-gen Mac laptop and desktop chips, and either a 5- or 3-nanometer Apple smart glasses chip.

It’s impossible to know the specific year-to-year performance increases for each of these chips — most of them are far from finalized — but Apple’s past track record provides some general expectations. In addition to small annual or biannual battery life improvements based on big drops in nanometer manufacturing scale and subsequent refinements of the same nanometer’s process, it’s fair to assume annual single-core performance gains of 15% to 30% for some tasks, with multi-core jumps ranging from 40% to 200%, depending on Apple’s overall product priorities for a given year.

Two key areas currently stand out as likely to impact multiple Apple chips at various points over the next five years. First, Apple plans to integrate self-designed 5G modems into some of its chips, which led it to purchase Intel’s smartphone modem division for $1 billion last year. And beyond trying to stay comfortably ahead of Intel in the CPU department, it will also compete with Qualcomm, which makes laptop, smartphone, smartwatch, and XR headset chips of its own. Beyond its own 5G push, Qualcomm has focused heavily on improving the GPUs, camera-supporting features, and broader AI capabilities of its processors, none of which Apple will want to lag behind.

In other words, there’s a lot to look forward to over the next five years — a constellation of faster and more energy-efficient Apple ARM chips, spread across a wider range of devices and use cases. Expect to get some more concrete details on Mac ARM plans at WWDC this month, then the first 5-nanometer chips in iPhone 12 models by the end of this year.