Venture capitalists like to keep score, and app marketing agency Sensor Tower has come up with a new way to rank, based on the number of downloads for companies in a VC’s portfolio. And the winner is … Kleiner Perkins Caufield & Byers, based on the popularity of the apps Snapchat, Spotify, and Uber.

Sensor Tower counted 265 million downloads for apps that were backed by the top VCs in 2015 in the U.S. iOS app store. The agency then created a chart (below) with the top 20 VCs based on mobile download estimates from its Store Intelligence platform, which tracks all apps, including the top 1,000 most-installed iOS apps.

Expanding on prior research by CB Insights, Sensor Tower looked at a group of more than 30 venture capital firms with substantial active investments in the mobile apps space (exits are not included). KPCB came out on top, with active investments in 13 of the top 1,000 apps, including Snapchat, Spotify, Flipagram, Duolingo, Text Free, Shopkick, Houzz, Airbnb, Nextplus, Flipboard, Pinger Textfree, and Up by Jawbone. These apps had 81.26 million downloads on the U.S. App Store in 2015.

Institutional Venture Partners was No. 2, with an estimated 60.78 million downloads last year. Its investments include Snapchat, Dropbox, TuneIn Radio, RetailMeNot, and Supercell. The latter is the maker of hits such as Clash of Clans, Boom Beach, and Hay Day.

Overall, 17 of the App Store’s 23 categories had VC-funded apps in the top 1,000 last year. The six categories without any qualifying apps funded by the top 20 firms we analyzed were: Books, Catalogs, Navigation, Reference, Sports, and Weather.

Games had the most apps in this group by a wide margin with 21, including the Supercell titles, Angry Birds 2 from Rovio, QuizUp! from Plain Vanilla, and Two Dots from Playdots.

All told, 85 of the top 1,000 apps on the U.S. App Store last year were funded by the firms that Sensor Tower analyzed. 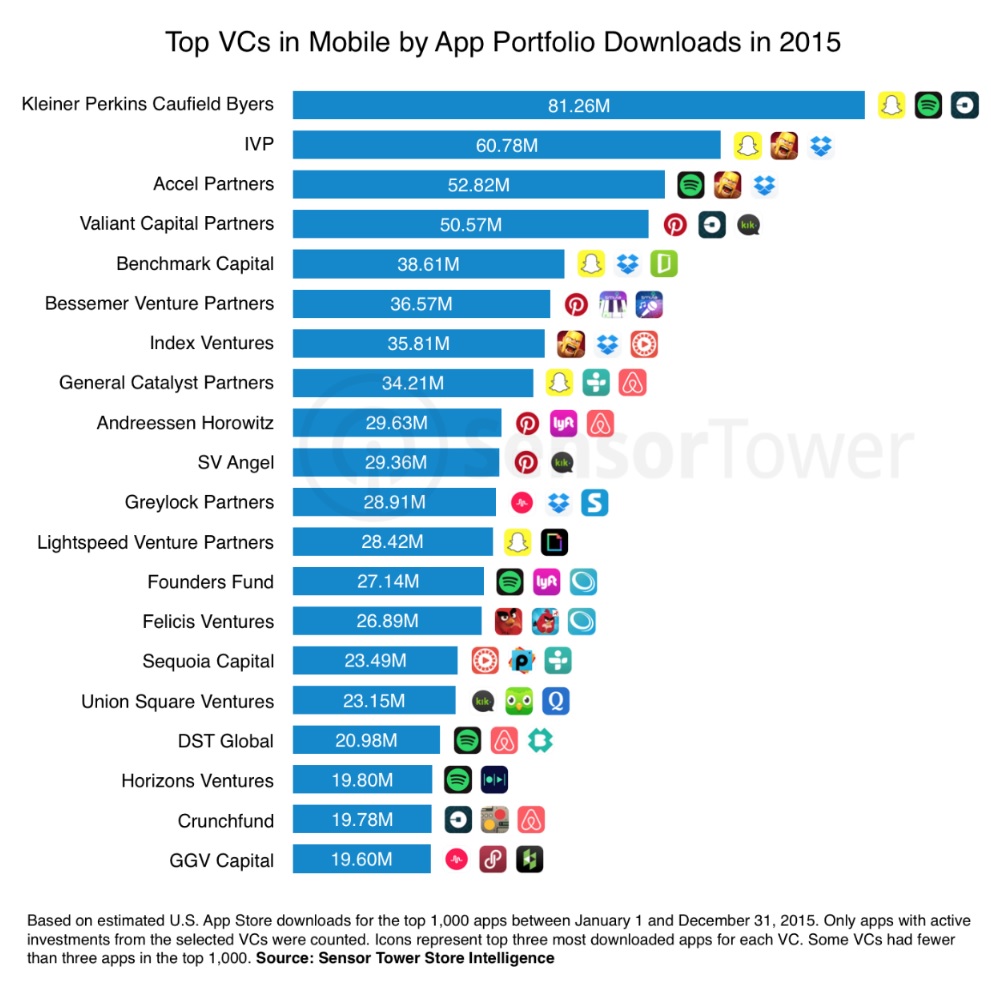 Above: The top VCs in mobile, based on 2015 app downloads.