Emoji had a huge victory this week, with Apple confirming that the “middle finger” emoji (along with many others) will grace iOS keyboards soon. But why stop at emoji when you could start throwing stickers in the middle of your text messages?

That’s what New York City-based Hi-Art is asking. Today, the company is launching an iOS app that lets you send stickers and emoji through SMS, iMessage, Facebook, and Twitter.

Stickers are more elaborate graphics than emoji, often bigger in size and with more complex designs.

Hi-Art’s premise is that stickers enable enhanced expression when communicating in text form, but that people are largely limited to the emoji included in iOS’s keyboard or have to switch to messaging apps that carry stickers such as Line and WeChat. With Hi-Art’s app, iPhone users can send the stickers in the form of SMS or iMessage messages right from the default app.

“Everybody looks at emoji and wants to see more. … The answer to that became stickers,” said cofounder and chief executive Nico Dios. He noted that stickers in messaging apps have been very popular in Asia for quite some time, yet have not caught on in the U.S.

While stickers in messaging apps often must be purchased, about 60 percent of Hi-Art’s are free, with the exception of certain branded stickers, which will cost between $0.99 and $1.99 for a pack of 20. These branded stickers are developed in partnership with music artists, graffiti and graphic artists, and other celebrities. There are more than 1,000 stickers and emoji currently offered in Hi-Art’s app. Dios draws much inspiration from street art and graffiti as forms of expression and communication, having been part of the New York-based graffiti crew Irak. He has exhibited his own works in New York, Los Angeles, Milan, and Paris.

And to the skeptics who don’t see the need for anything more than the iPhone keyboard’s emoji, Dios wants to remind them “the reason that you want stickers is because they’re constantly updated, you have constantly new ways to express things.

“Stickers are dynamic, they’re more rich in graphics… I think that messaging and pictures and messaging with images is only getting bigger, and I think that it’s only going to get more interesting,” he added.

And while Dios didn’t want to share too much about future plans, he did hint that more interesting releases will come from the company as iOS evolves and Hi-Art iterates on its product line.

New York City-based Hi-Art was founded in 2013 by Nico Dios, Bobby Waltzer, Brian Lederman, and Ted Xidas. The company has raised an undisclosed amount of seed funding from friends and family. 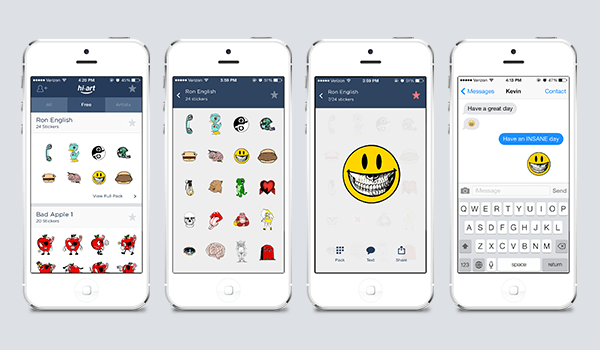