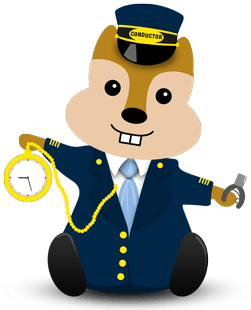 Flight and hotel search startup Hipmunk today announced it is adding routes from Amtrak to its travel search site.

The train results now appear in-line with flights whenever users search for a travel route. The results only show up when Amtrak provides service between the two cities the user is searching, and train schedules will live and die by the site’s “agony” metric, which includes metrics on delays, travel time and number of connections, a Hipmunk spokesperson told VentureBeat. The feature goes live on the site and on Hipmunk’s iPhone application today.

Part of Hipmunk’s charm is its streamlined interface — you only need to enter a general location and a few dates. Once you find a flight you like, you can jump to Orbitz to book the flight. The train routes will work in a similar way, and Hipmunk will generate revenue from the train routes the same way it generates revenue from the flight routes — through a lead-generation model.

“Amtrak is much cheaper than the flights and actually just about the same length of time as some of the flights,” a Hipmunk spokesperson told VentureBeat. “It’s also great for folks [who] have meetings in city centers and want to arrive downtown rather than in an airport on the edge of town. And some people would just rather take a train than fly or go through airport security.”

The site passed 1 million monthly searches in August, and its search traffic is growing by around 15 percent each month, according to the company. The flight and hotel search company was cash flow positive when it started, but it then initiated rapid expansion plans, chief executive Adam Goldstein told me.  The site has saved more than 150,000 hours of travel-related “agony” since it launched a year ago, Goldstein said. 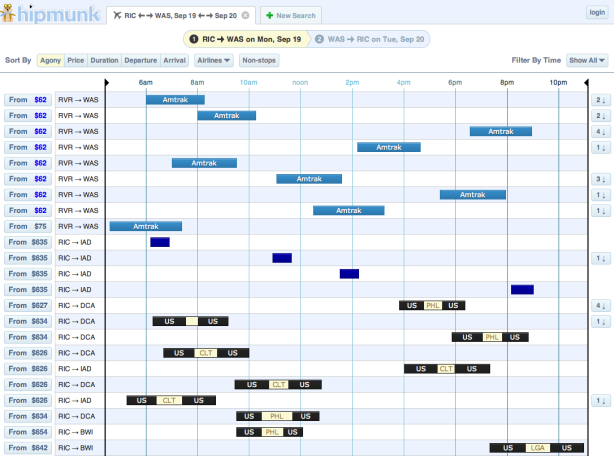 The company also features a hotel search engine that is less popular than the flight search engine but makes much more money for the site, Goldstein said. The search engine uses a proprietary sorting mechanism that sorts hotels by “ecstasy” — a combination of hotel ratings, prices and other metrics. Just about every flight search engine has a hotel booking service — and that’s how they end up making a majority of their money.

Hipmunk has raised $4.2 million in funding in a round led by Ignition Partners. The company is a Y-Combinator incubated startup co-founded by Goldstein and Steve Huffman. Reddit co-founder Alexis Ohanian is one of the site’s main designers and is the man responsible for the adorable chipmunk logo that’s part of the site’s charming appeal.