For companies looking to make a move into mobile advertising, it might be good to a get a few bilingual Spanish speakers on staff. While money has already been following Hispanics online for a while, with Hispanic consumer spending expected to top $1 trillion by 2010, and use of mobile phones exploding within the Hispanic market, expect more and more mobile marketing targeted at Hispanics in the coming months.

A March 2008 Pew/Internet study found Hispanics leading in nearly every single category of mobile phone usage, in some cases by double digits: 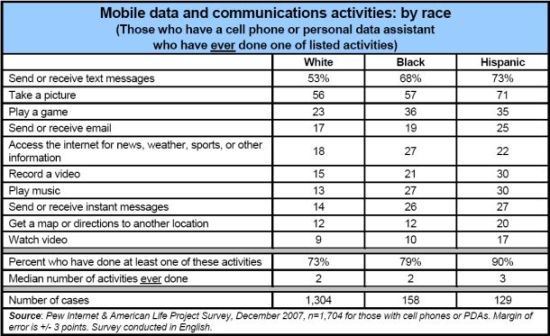 The rise in Hispanic mobile use has given advertisers a way to engage with an audience that has at times been hard to reach. Adam J. Segal, president of Washington, DC-based multicultural PR firm The 2050 Group, notes, “Until the recent explosion in mobile, Hispanic consumers were difficult to reach in massive numbers if Univision radio and television didn’t match marketing priorities. Hispanics are highly connected, receptive to mobile marketing efforts, and way over-index in many of the key categories that jive well with mobile.“ To that end, two companies, HipCricket and ImpreMedia, have both inked deals this week to engage Hispanic users over cell phones.

HipCricket, a mobile marketing company based in Kirkland, Washington, announced yesterday it would begin working with Spanish Broadcasting System to help with outreach via mobile. The deal, which is part of HipCricket’s larger Hispanic Mobile Marketing Network initiative, will put the group in charge of handling outreach to over 7 million Hispanic radio listeners.

Like many marketing campaigns aimed at Hispanics, it focuses on opt-in text messaging to engage consumers. “The mobile phone is an integrated part of the Hispanic community and lifestyle,” said HipCricket CEO Ivan Braiker. “For may within the community, the mobile phone is also their primary access to the Internet.” He also points out that adoption of mobile in favor of landlines is higher among Hispanics.

ImpreMedia, a New York City media publisher with a focused network of Spanish-language websites, announced its own deal with mobile search company 4INFO on Monday, with the two companies teaming up to send out text messaging alerts for sports, entertainment, and politics. With a baseline of three messages per day, with more possible during a high-profile event such as a soccer match or election day results, the company is in talks with sponsors looking for a way to access Hispanic consumers.

Mario Alfano, a senior vice president of Audience and Marketing at ImpreMedia, points out that in many Latin American countries, texting is not seen as “something only young kids are doing — older people are doing it well. Because of the market there, it’s often much cheaper to text someone, so there’s greater acceptance.”

He also finds that advertisers are willing to move into much smaller markets when they know they’ll reach a tightly focused demographic. “Advertisers are looking to reach masses of people, but I think with mobile you can get down to lower numbers, especially when it’s geotargeted or timed ads. You really only need 10,000, maybe 20,000 people signed up.”

Still, he warns that companies have to craft messages carefully when attempting to market to Hispanic consumers mobiles. “The biggest mistake is thinking, ‘Oh, if we build it, they will come.’ It’s not a monolithic market. This is the most personal way to communicate with someone, through their mobile phone. It has to be relevant, both geographically and culturally.”