Eight months after launching on iPhone, Hopper has brought its airfare prediction app to Android.

With north of $20 million in funding since its inception, Hopper’s price-prediction algorithm is its raison d’être, and promises to answer this one question: Should I buy now or wait? 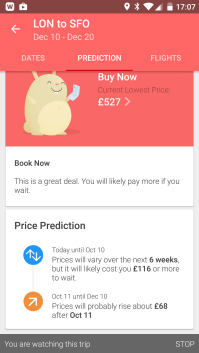 Founded in 2010, the Cambridge, Massachusetts-based company spent much of its early years scaling its backend and archiving flight prices — it claims 3 trillion flight prices in its archive. It has also offered web reports for some time, while in 2014 Hopper launched what it called a “fun little experiment” in the form of a last-minute flight-booking app called GTFO (Get the Flight Out).

However, all the work so far has been building up to the main Hopper app. It tracks billions of flights each day to predict the right time to book your flights far in advance — it claims it can save up to 40 percent on the average cost of a flight.

You input your travel dates, then receive alerts if prices fall and before they’re likely to rise. It also tells you if the prices are only likely to increase, indicating you should probably buy now.

If you thought flight prices are generally more inclined to rise than fall, think again. According to Hopper data, for two out of every three flight searches, the price will drop at some point prior to departure. Moreover, while you might think it makes sense to book your flight as far in advance as possible, airlines often set their early prices “conservatively,” meaning they may drop if demand isn’t met. 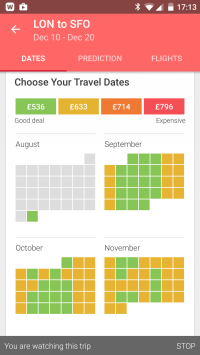 The app also features a built-in calendar that color-codes when the cheapest times are to fly, which is useful if you’re flexible with your dates.

While the app was essentially an aggregator before today, linking out to third-party sites to complete the actual booking, Hopper for iOS now lets you book quickly within the app, and gives the first clear sign of how it plans to monetize its mobile app — commission on fight bookings.. This feature will be added to the Android app shortly too.

While other well-known services have flight-price prediction features built in, such as online travel giant Kayak, the Hopper crew have built a beautiful app dedicated to this specific cause, offering a handful of genuinely useful tools to help track prices before they rise, or when they drop.