Apple, Google, and Microsoft have very different app development strategies, in alignment with their respective business models. Last year, we took a look at the trio’s app stores to see how the three develop for each others’ competing platforms. We’re doing it again this year to see what, if anything, has changed.

Up until last year, Apple didn’t bother making apps for Android at all. The company now has three apps on Google Play (Move to iOS, Beats Pill+, and Apple Music). That said, Apple continues to ignore the Windows Store.

Google brings almost all of its major apps from Android to iOS, offering solid experiences on both. The company also shuns the Windows Store, with the exception of Google Search.

Microsoft, meanwhile, continues to develop apps for all three platforms, though, of course, the company still prefers its own. As in 2014, Microsoft this year offered more iOS apps than Google. And once again, both Microsoft and Google offer more iOS apps than Apple does in its own store.

Without further ado, here’s a snapshot of how many apps the three companies had made available in each store at the end of 2015: 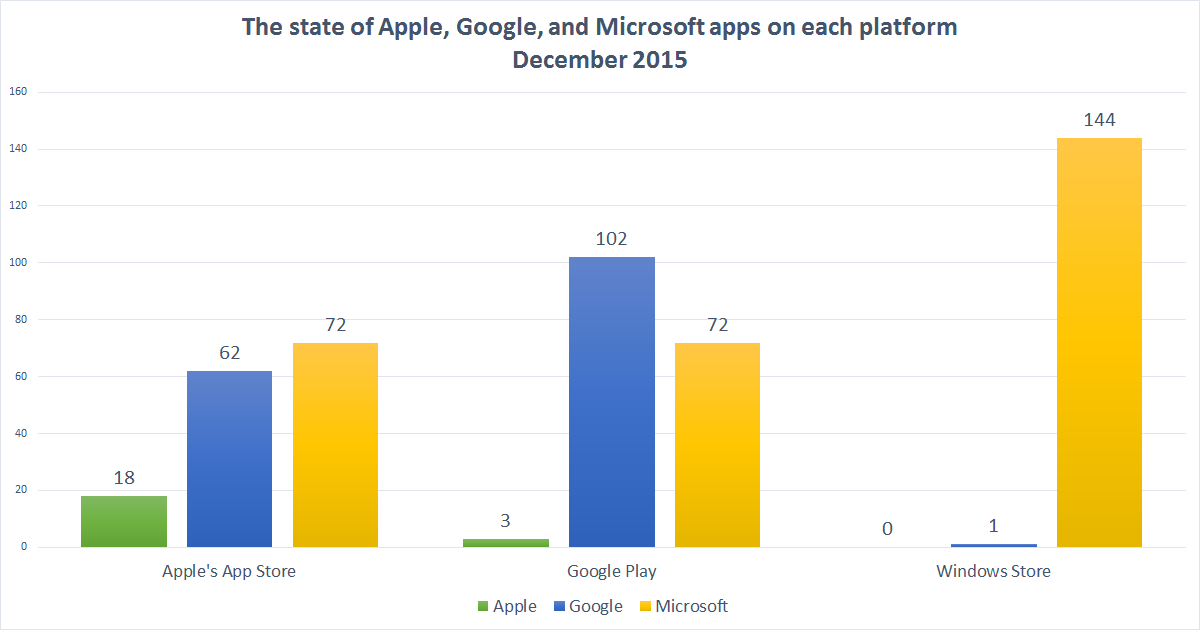 To compile this chart, we tallied up the number of apps published by these companies in each of the three app stores. We’re counting apps listed in the stores, not those that come preloaded on devices (and we’re counting just one app for iOS, instead of one for iPhone and one for iPad, just like on Android and Windows). Remember that not all apps are available in every market, so you may see fewer apps, depending on which regional store you are accessing. Also keep in mind that these companies build software that doesn’t reside on app stores and acquire apps with different names — neither is being counted here.

All in all, though, the above chart gives a rough idea of how the three tech companies currently interact with the three big app stores. The landscape has shifted a bit since 2014, but not significantly.

At the end of last year, we didn’t predict that Apple would release any apps on competing platforms, and yet that’s exactly what happened. Next year could easily bring more such surprises.

With the Windows Store succeeding the Windows Phone Store, thanks to the debut of Windows 10, the big question for 2016 will be whether Google starts to take Microsoft’s platform a bit more seriously. That will largely depend on how quickly Windows 10 grows its market share and whether the store sees more use than it has until now. We’ll check back at the end of 2016.