Ever since Apple debuted its FaceTime video chat feature on the iPhone 4, speculation has run rampant about the feature appearing on other Apple devices. Now, it appears we have more concrete information about FaceTime showing up on the next iPad and iPod Touch, as well as an idea of how it will work, according to a trusted source that spoke to the mobile gadget site Boy Genius Report.

On the iPhone 4, FaceTime relies on your phone number to make and receive chat requests. For the iPod Touch and iPad, it looks like FaceTime will depend on your email address instead. You will have to register your Apple ID with your devices as well. Apple will be using push notifications to deliver FaceTime connection requests — judging from new additions to the FaceTime framework in the upcoming iOS 4.1 operating system.

While Apple hasn’t yet announced new iPad and iPod Touch hardware with cameras, at this point it’s all but given. Many people have complained about the iPad’s lack of a camera, and it seems to be a standard feature for tablet competitors. We also expected the iPod Touch to gain a camera last year, but it never happened (it was likely dropped at the last minute). Now that FaceTime is the focus of the iPhone 4’s ad campaign, Apple has good reason to introduce cameras to more of its products. (A report from earlier today hinted that the next iPod Touch would get a 3-megapixel camera.)

BGR expects that Apple will eventually unify the FaceTime connection procedure across all of its platforms. It wouldn’t be that difficult for Apple to tie FaceTime into email addresses on iPhones. I’d also expect that FaceTime will work similarly on Mac computers — perhaps through its iChat instant messaging application. 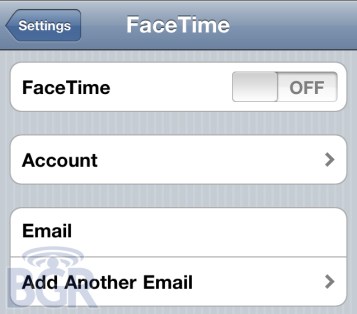