This week the world of tech saw two fierce competitors in an emerging space experience a strange twist of fate in which a victory for one turned into a windfall for the other.

The companies in question are part of an important battle happening quietly behind the scenes to be the winners that provide a service called “carrier billing.” This is the service that lets users pay for purchases like apps on their phone bill, rather than a credit card.

It’s a critical service in emerging economies, and even in many developed ones where credit cards are still not commonly used.

In one corner, we have Boku, a San Francisco, California-based startup that has raised about $75 million in venture capital from a bunch of nobody funds you’ve probably never heard of: Andreessen Horowitz, Benchmark Capital, Khosla Ventures, and Benchmark Capital. The firm has snagged deals with a lot of gaming companies and Facebook.

In the other corner, we have Bango, a British company that is publicly traded. Bango was founded in 1999 and gradually evolved its service successfully. In recent years, Bango has landed partnerships to provide carrier billing for the app stores for Google, Amazon, Samsung, BlackBerry, Firefox, and Microsoft.

Not bad. A recent research report from Progressive Equity Research estimates that Bango has 40 percent market share in this space.

“Bango was an early entrant into the mobile payment space,” according to the Progressive report. “Over the past sixteen years it has made significant investments in both its platform and product set. The benefit of this historic investment appears to be apparent — it has almost half the market.”

But with all the momentum behind enabling carrier billing, there’s been one holdout, and it’s a big one: Apple.

The company dominates app sales and services, and so its reticence to adopt carrier billing has left many players in this arena a tad, well, impatient.

Indeed, last year after two carriers establish workarounds for customers to pay for iTunes purchases indirectly, Bango tried to nudge Apple to go all the way:

“It should encourage Apple to take the big step and integrate carrier billing directly into the iTunes store,” Bango execs wrote in a blog post. “The evidence from all other content ecosystems is that when carrier billing is embedded into the store experience on the smartphone itself, it yields a big uplift in content sales.”

Fast-forward to this week. O2 and its parent company, Telefonica, announced that Apple would begin offering carrier billing to iTunes customers in Germany. Though it’s a small start, it’s a significant one that could have big ramifications for the carrier building startups.

Here’s where things get weird.

This being Apple, no one was apparently allowed to publicly confirm their involvement in the deal. But there was a big assumption by many that Bango had won the deal.

Many investors certainly believed that to be the case. And so starting yesterday and continuing today, trading in Bango stock spiked and the share price rose 50 percent on the London Stock Exchange at one point (though it fell a bit at the end of trading today). 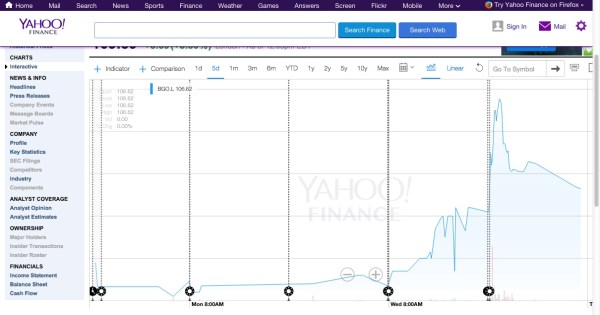 Above: Bango’s stock this week

Ingrid Lunden of TechCrunch was early on the news yesterday and also initially reported that it was Bango that won. But later, she updated her story with sources suggesting it might be Boku, which had received some investment from O2 previously.

A separate source in the telecom industry familiar with the deal has confirmed today to VentureBeat that it was Boku’s deal, not Bango.

Boku did not respond to our request for comment.

A Bango spokesmen reached by phone today said the company couldn’t comment on the deal. But he pointed to a vague blog post the company apparently felt compelled to write this week that left open the question of whether it had won the deal or not.

Bango wrote: “We cannot comment on Apple’s expansion of support for carrier billing, other than to say we are delighted that Apple is extending the use of direct carrier billing following last year’s support for iTunes voucher sales.”

Ultimately, if Boku continues to expand its relationship with Apple, none of this may matter. But at least for the first couple of days, to the victor did not go the spoils.