A little over a year ago, Facebook was so bad at monetizing mobile that the company tried to hide that fact in its legally required pre-IPO documentation, adding it only days before the company went public. The whole mess contributed to what ended up almost being the worst IPO in a decade and a share price that still hasn’t recovered its IPO heights.

Then a week ago, Facebook announced record earnings and a massive 41 percent of revenue from … mobile.

How did the company turn it around that quick?

The year of mobile, at last

“Every single year we’ve heard people say ‘This is the year of mobile,” Nanigans SVP Dan Slagen told me, laughing. “But this is the first time we’ve seen someone come forward and put forward the kind of number that Facebook did.” 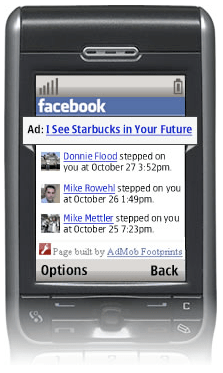 Nanigans might be the single biggest conduit of Facebook ads on the planet, managing “nine figures” of annual ad spend. So Slagen knows a little about Facebook and revenue. And he says that Facebook targeting has gotten so good in the last year that “there’s really no excuse for someone seeing your ad who doesn’t want your product.” That’s had a massive impact on Facebook profitability, especially on mobile.

He’s the CMO of mobile advertising company Velti, and he says the massive shift is due to Facebook’s data-centric approach to products and decisions.

“I don’t think it was luck,” Subramanian told me yesterday. “Facebook executed flawlessly after spending the second half of last year experimenting and looking at all the possibilities of making money in mobile.”

Perhaps most interesting is that Facebook’s mobile revenue has gone through the roof this year at the same time that Google’s mobile earnings have tapered off — in spite of layering in mobile into AdWords, which was supposed to increase click prices but actually did not.

For Slagen, it’s all about creative, targeting, and optimization, which have never been better on Facebook.

“Mobile ad units used to be tiny little banners, but Facebook completely broke through that model,” he said. “Facebook’s mobile ad spot is a massively large ad unit, which has given advertisers a whole new opportunity on mobile.”

Because Facebook’s mobile ad unit is large, brands can be creative again. Aesthetics and visuals are the first things that grab attention, and there’s plenty of room to add a title and some copy — perhaps a call to action. Add in Facebook’s unparalleled targeting capability, and you’ve got a winner, advertisers say — and profitable winner.

Subramanian agrees, but he also points to Facebook’s scale and targeting of specific niches as reason for the social network’s mobile success. Aggregating enough mobile supply is a challenge for even the largest of mobile ad networks, he told me, which makes Facebook’s massive billion-plus network so attractive. Alone, it has more scale than any individual ad network.

And when Facebook added the capability for mobile developers to initiate app installs right from ads, that simply added to the appeal for a market niche that is ready and willing to pay for ads that work.

“Facebook’s not just getting higher click-through rates, but also making sure that what they’re doing is driving results for advertisers,” the Velti exec told me. “App installs work extremely well, because advertisers can slice and dice users Facebook users for the right audience so they can drive the lifetime value of customers way up.”

[Editor’s note: If you’re a brand or developer and have used Facebook advertising, we’d love to hear from you. If you fill out our survey, we’ll send you our up-to-date report on our Mobile Advertising Index, which provides analysis about the top forms of mobile advertising.]

That’s what really changed the game from an advertiser’s perspective, Slagen says. Facebook now offers five different slicing mechanisms to give you exactly the audience you want.

Add them all up, and you’ve got targeting that is making Facebook a contender against the company we’ve traditionally thought of as having the richest data about people and purchases ever: Google.

“We just haven’t seen the data capture on Google that we’ve seen on Facebook,” Slagen says.

The ad unit Facebook uses on mobile is the same ad unit that lives on desktop. It’s one campaign, one set of keywords, the same imagery, and the same words. From a recall perspective, that’s much more memorable for consumers, and therefore much more effective for advertisers. 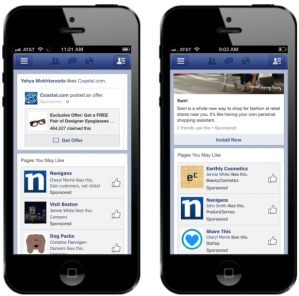 Interestingly, that’s similar to what Google has tried to do, with varying degrees of success, in making AdWords campaigns mobile as well as desktop.

And yes, graph search is starting to help as well, for reasons both personal and local.

“If you see people searching for things you have an idea of what they’re interested in,” Subramanian says. “And while local search is huge for Google, for Facebook it could be even more interesting as Facebook becomes the start screen for your life.”

He points to experiments such as Facebook Home and open graph as ways for Facebook to continue building the intent graph that Google has owned so profitably for years as a result of its premier position in search. Which certainly continues to be one of the most important things the social network needs to continue to work on, Slagen adds.

That, with Facebook’s custom audiences, and more external data, could help Facebook — which already is the largest player in mobile display ads — increase its share even more.