August 19, 2016, was an important date for travelers in London — it was when the new Night Tube underground transport service was opened to the public, offering round-the-clock weekend access to Londoners on a handful of busy routes.

Unlike other underground travel systems, such as the New York Subway, London’s gargantuan underground network — the oldest in the world — has generally closed around midnight, meaning those looking to traverse the sprawling conurbation in the wee hours would have to travel by bus or splash out on a cab. With the rise of Uber, among other etaxi services, things have gotten cheaper and more convenient, of course, which is why London’s black-cab industry has been fighting Uber with all its might.

For background, Uber already knew that many of its customers use the service to travel to or from an Underground station — out of all Uber rides, four in 10 begin or end within 200 meters of a Tube station. And some new data from Uber reveals interesting insights into the impact that the Night Tube is having on Uber’s service across London.

For now, the Night Tube is operational on the Central and Victoria Lines, extending reasonably far north, south, east, and west. But large chunks of the vast network are not covered, which is why the Night Tube will eventually expand to cover more lines. Early Uber figures show that in some central zones, certain stations have seen a drop of as much as 40 percent in pickups during times when the Night Tube is operational (weekends). It’s reasonable to infer from this that locals are using the Underground network, which is cheaper. 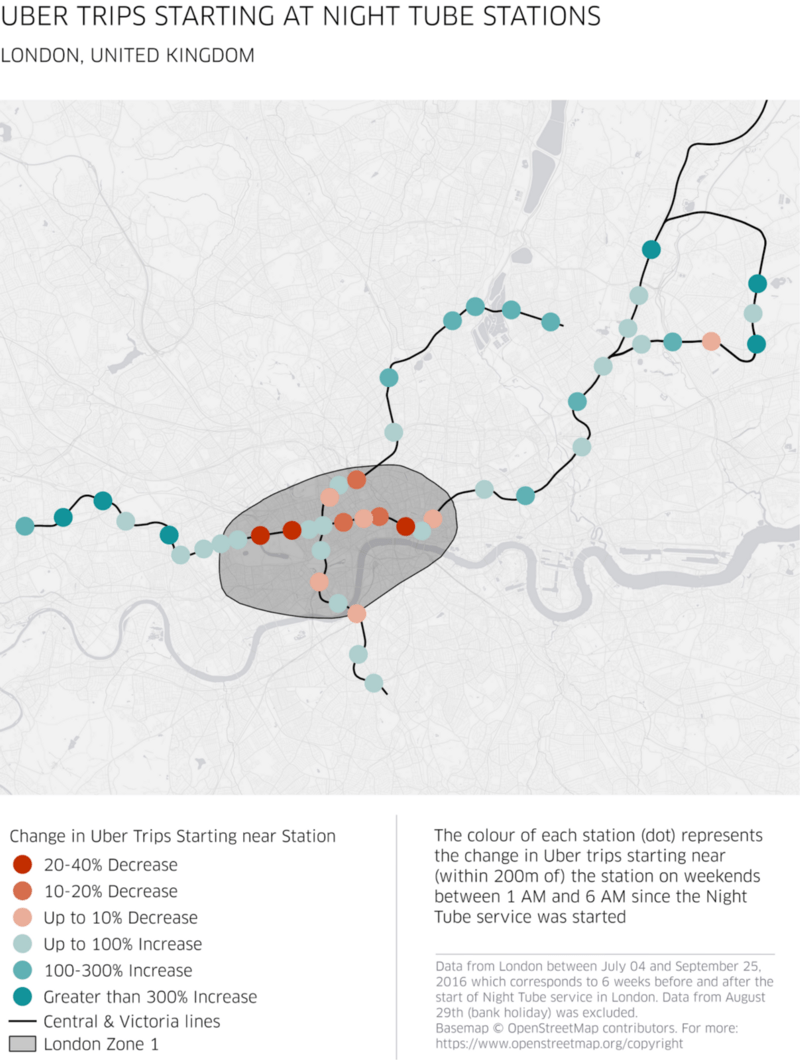 It’s also worth considering why the Central London decrease in Uber pickups is not proportional to the increase elsewhere — the figures suggest that Uber may have gained more customers overall as a result of the Night Tube.

Perhaps more people are inclined to stay out later, given that they don’t have to take a taxi all the way home — meaning that they can travel all the way to North London on the cheap, and then hail an Uber for “the last mile.” Alternatively, if Uber’s total pickups haven’t increased in London, perhaps travelers were once more inclined to get a bus or walk as far as they could before beckoning an Uber. Without access to Uber’s user-base, it’s difficult to know whether the Night Tube has boosted Uber overall.

However you slice and dice things, it’s interesting to see the intricate relationship between these new-fangled etaxi startups and the existing public transport infrastructure. Indeed, Google Maps, among other transit / navigation apps, has increasingly been including companies such as Uber, Gett, and Lyft as part of its transport options, listing them alongside buses, trains, and bikes. This is representative of how people travel cities — they like to figure out the best and cheapest combination for their particular route.

This latest data could also serve an ulterior motive on Uber’s part. As the company continues to battle authorities in London and other cities around the world, it’s looking to ingratiate itself with locals — it wants to appear as complementary, rather than in conflict with the existing way of doing things.

“The launch of the Night Tube is a unique opportunity to understand how Uber helps public transport users get from their station to their front door,” explained Santosh Rao, policy research data scientist at Uber. “Because the Night Tube service is still limited to a small part of London, the importance of these ‘first mile/last mile’ links  —  whether by bus, Uber, walk, or bike —  is more critical than ever. We’re excited to be playing a part in making the Night Tube even more successful  —  and helping make London a truly 24-hour city.”