Those three words, “rocket science steak,” had brought me to this tiny conference room in a shared workspace in the SoMa district here, the famous hotbed of technology startups. And judging by the envious looks on the faces of many of the people on the other side of the conference room’s glass door, I made the right decision.

I’ve come to check out Cinder, a brand-new high-tech cooking appliance from Cinder Cooklabs, a member of the current class of startups in Y Combinator, Silicon Valley’s best-known accelerator program, that goes on sale today.

Norman, formerly a product developer at Toyota Motors, is Cinder’s cofounder and CEO. Right now, he’s wearing a pair of surgical gloves and lovingly showing off a shiny, spotless prototype of his device, which is expected to be available early next year. 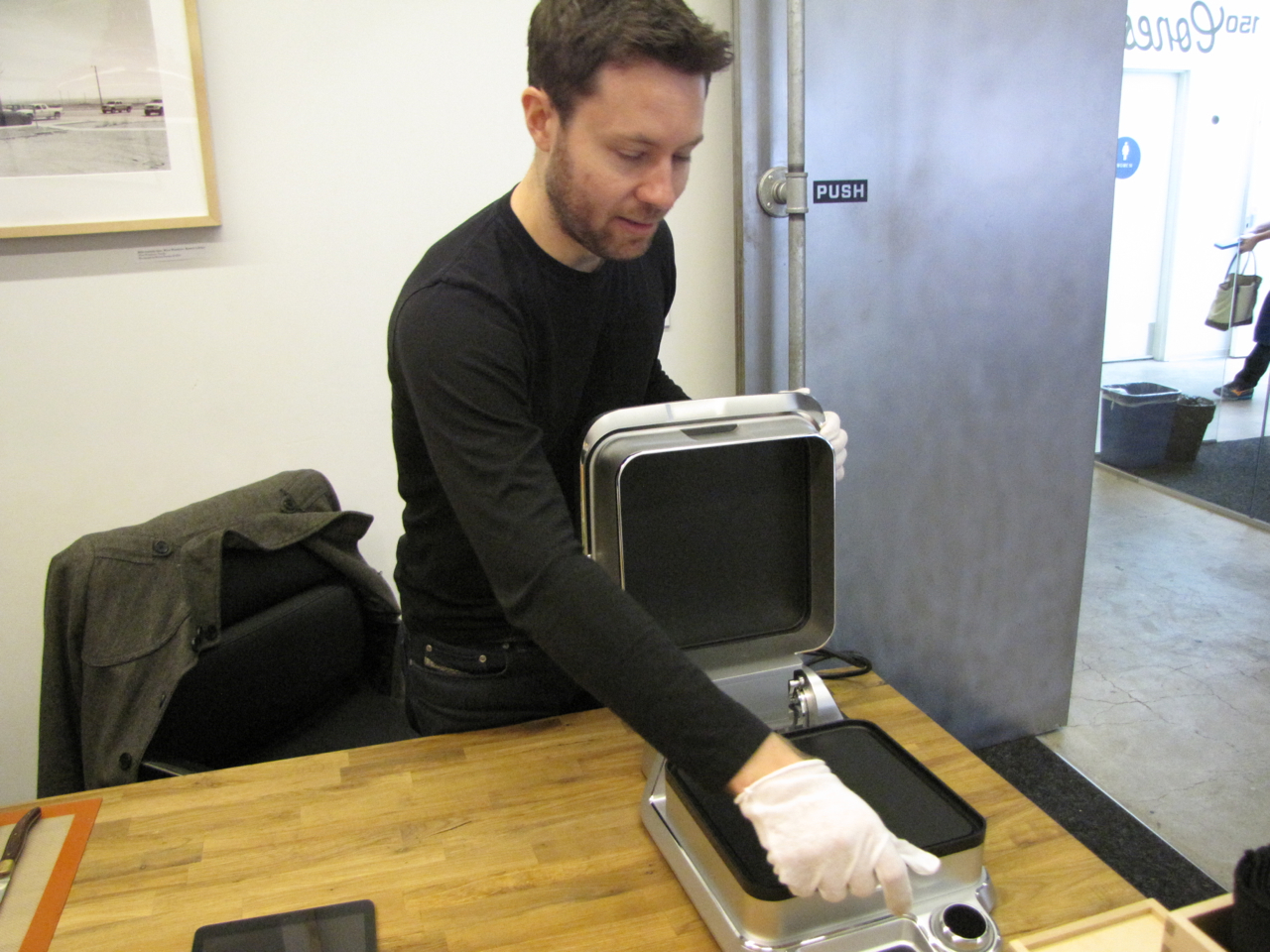 In the past, I’d have doubted that technology, let alone rocket science, could be brought to bear in the cooking of a steak. But sitting here in the conference room, salivating as a couple of perfect-looking pieces of meat cook across the table from me, I’m singing a different tune. Really, I’m starving, and looking forward to seeing just why Y Combinator, which can be a pretty shrewd judge of exciting technology, got behind Cinder.

It’s like this: Cooking meat is all about temperature. Until you get to the proper temperature, the meat isn’t done. Go past that temperature, and it’s overcooked. But according to Norman, temperature and time have nothing to do with each other.

The goal of Cinder is to free the cook from “the tyranny of the clock.”

Cooking the right way without watching a timer

Cinder, which costs $499, is aimed at people like me who are distracted cooks, and often ruin a perfectly good steak. The device is meant to allow us to do steak — or chicken, pork, duck, salmon, vegetables, or even hash browns — precisely the right way, even if we can’t be bothered to stay in the kitchen and slavishly watch a timer.

Here’s where the rocket science comes into play: Cinder has incorporated a series of precision sensors, as well as a philosophy of precision positioning, from the space program, all with the idea of heating food to the exact desired temperature, and not a degree more — and then keeping the food at that temperature for up to an hour or even two.

And it’s no wonder Cinder is leaning on concepts with their origin in the design of spacecraft and satellites. The company’s cofounder and CTO, Jim Reich, worked on space vehicles at Lockheed Martin’s Advanced Technology Center, and also worked at Xerox PARC.

The Cinder looks a lot like a panini press, and is centered around two individual plates that can be heated to temperatures with a precision of less than half a degree Celsius.

Norman explained that a medium rare steak should have an internal temperature of 135 degrees Fahrenheit. Getting there takes about 30 minutes, he said, but what if you’re not ready to eat at that point? What if your kid is still outside or your wife is wrapped up in a video game? Does that mean your steak should be ruined? 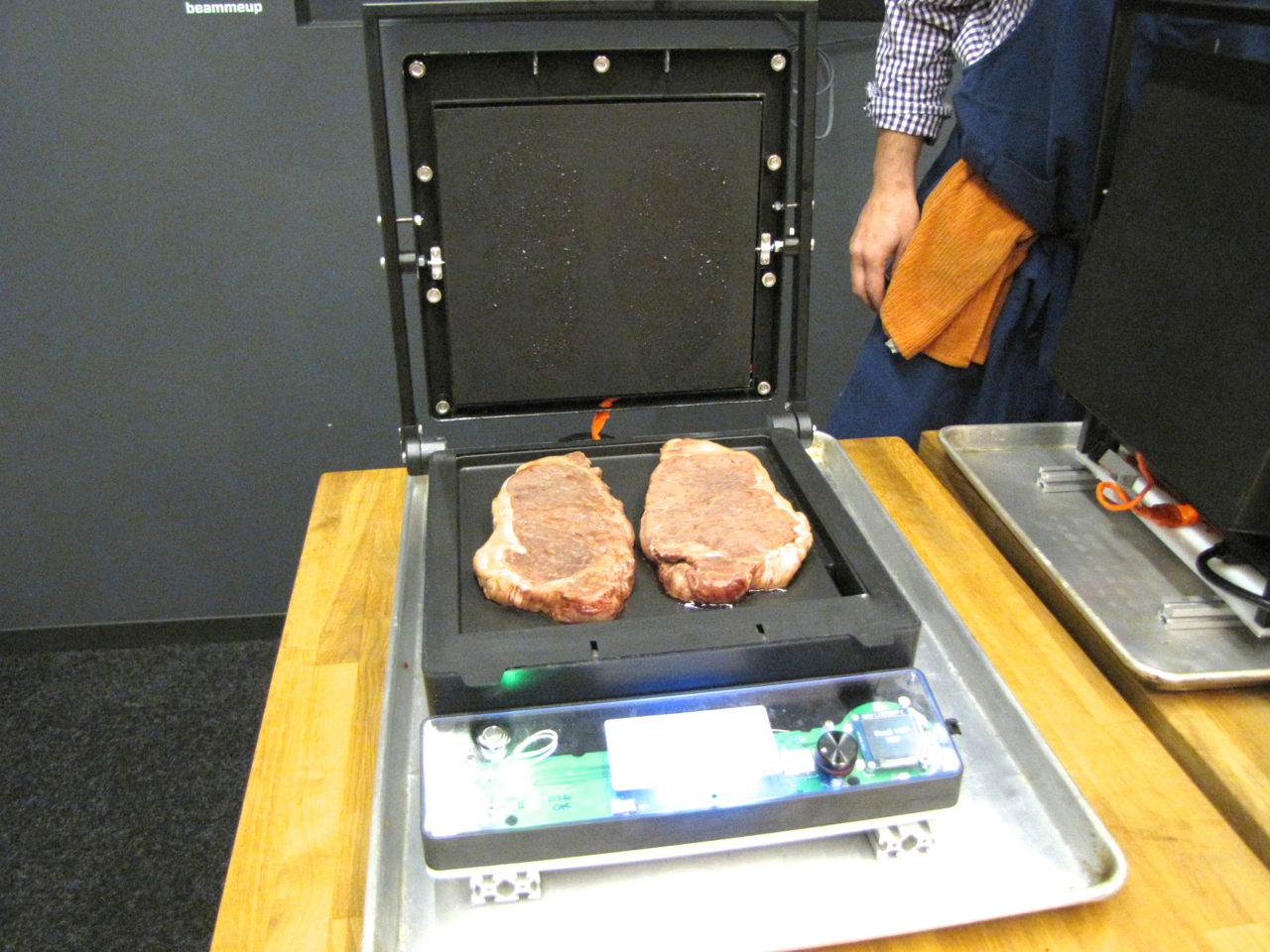 Above: A pair of steaks cooking on a Cinder

Not with Cinder. Instead, the device is designed to get the food to the right temperature, and then hold it there, relying on its high-tech sensors to ensure that the food — the steak in my case — doesn’t cook further, yet still stays at that perfect temperature. It’s counterintuitive, and even a little scary. But that’s Cinder’s value proposition.

In fact, by the time I’d arrived for my demo — and a lunch of steak salad — the steak had been cooking for about 90 minutes. Yet, according to Justin Linkner, Cinder’s development and demo chef, all it needed was to be seared.

To prove it, Linkner opened up one of the two working Cinders on the table — known as Alfred and Bones — and showed me the steaks. They didn’t look done, and there was little smell, and almost no juice. Yet, measuring the temperature, Linkner said they were ready. They just needed 45 seconds at searing temperature — about 550 degrees, and it would be time to eat.

Since this is the mobile app age, Cinder of course has one — in this case, for the iPad. Users first choose what kind of meat they’re cooking, then the cut, and finally the doneness. The app tells you how long it will take, and lets you kick it off with the tap of a button. 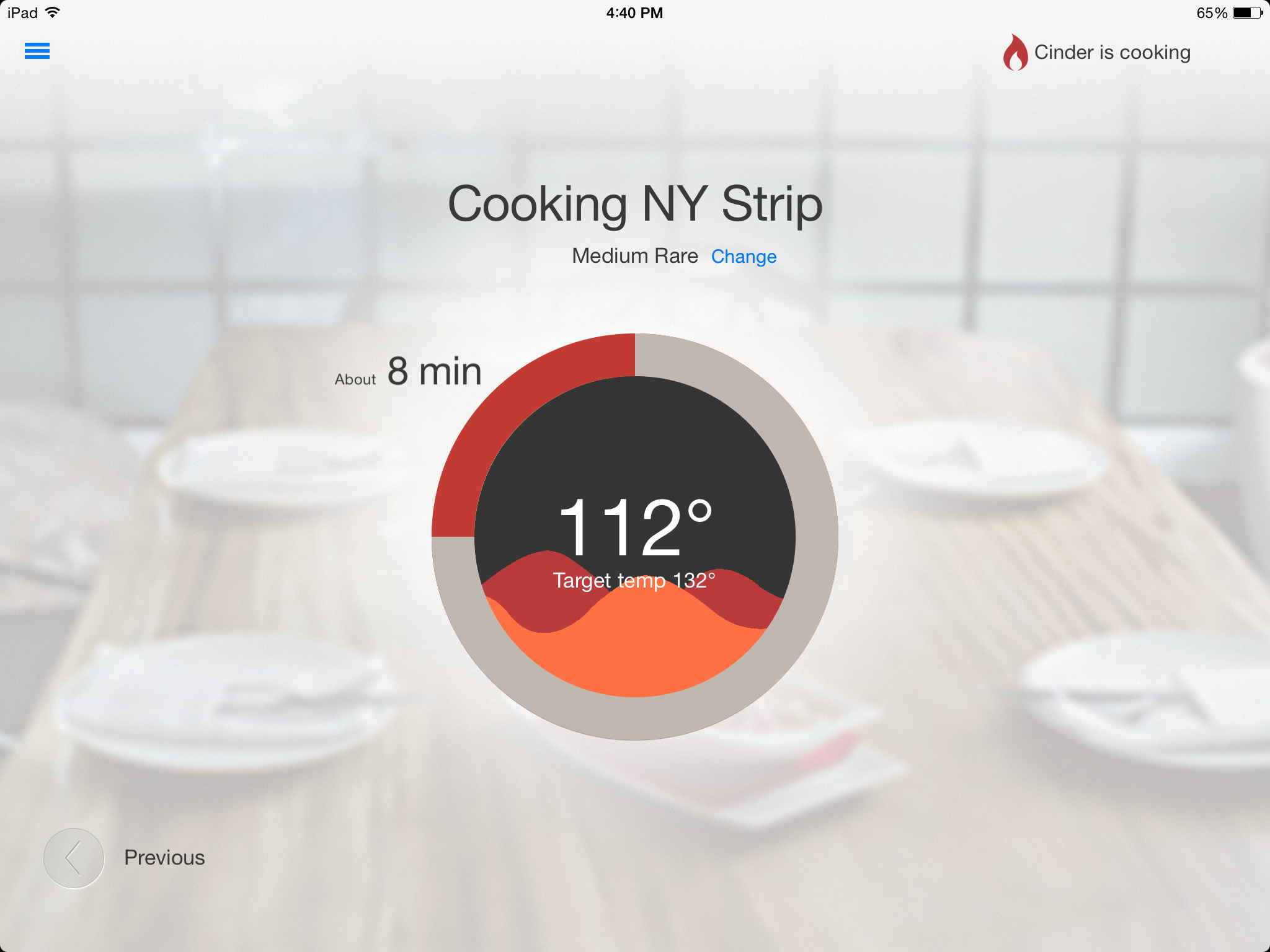 Above: Of course Cinder has an app.

The app isn’t a requirement — cooks can get Cinder going with a turn of a dial. But it does have an additional benefit: It allows cooks to keep track of their favorite efforts — the exact right temperature and cooking time for a rib-eye, for example — and share them with other Cinder owners.

Every technology demo should result in an edible product, especially when it’s fantastic steak salad.

The point of Cinder is to make it easy to turn out a perfectly cooked steak, and sure enough, that’s just how it worked. Cutting into that rocket science steak, Linkner proved that it was uniformly medium rare inside, exactly as it should be. 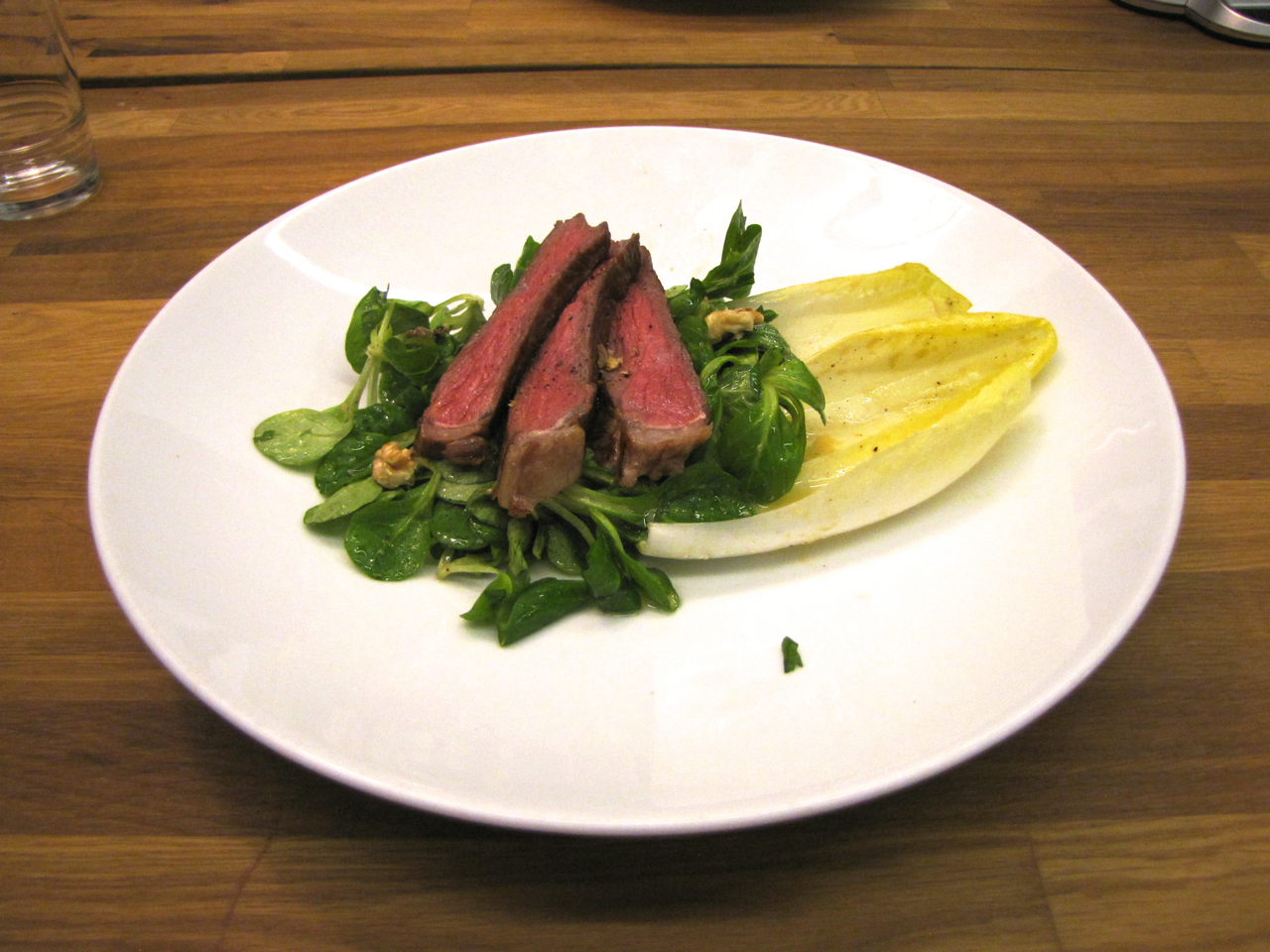 My problem when I cook steak has always been that I lack confidence. I know overcooking the meat is a crime, and I end up hacking the poor thing to death trying to make sure it’s still pink.

Although $499 is more than I might want to pay for such a device, the Cinder would be a godsend for below-amateur level cooks like me. Norman said other kitchen devices like the Vitamix and some espresso machines have demonstrated that consumers are willing to pay $500 for convenience. And so Cinder isn’t looking for investment, in part because it thinks that it will be able to cover costs with funds raised from preorders.

But Norman said he imagines every home cook will want one of the devices, and Cinder expects restaurants to get on board in the future, as well. Whether that proves to be true is unknown, of course. But the proof is in the pudding, or in this case, the steak. As I take my first bites into the meat, savoring the juicy texture and the rich flavor, I start to think about eating this way all the time. And not having to pay someone else to do the cooking.