Being a technology enthusiast who relies on a smartphone daily, I thought that I will get lost on a recent trip to China without Google Maps. But the lack of Google services in the country is only half the problem now for foreign visitors: China also recently banned VPN and forced App Store China to remove VPN applications.

The good news is, things aren’t as scary as they seem. If you research solutions before your trip, you’ll survive just fine. And to save you some work, here are a few lessons from my own experience navigating Beijing and Shanghai with the help of a smartphone. (Neither I nor the company I work for has any affiliation with any of the apps mentioned here.)

Did you know you cannot save maps of China for offline use in Google Maps? Neither did I. My Plan A failed; it was time for a Plan B. After some research I came across OsmAnd maps. They offer offline maps and navigation, as well as a bunch of other features I didn’t use. OsmAnd served me well and I never had to look for a backup map.

If you speak a bit of Chinese, you can also take advantage of Baidu maps (iOS, Android). These offer a fantastic navigation interface in a form of AR. Unfortunately, the maps are entirely in Chinese, so I only had a chance to observe my colleague using the app to navigate us perfectly to a late night party. 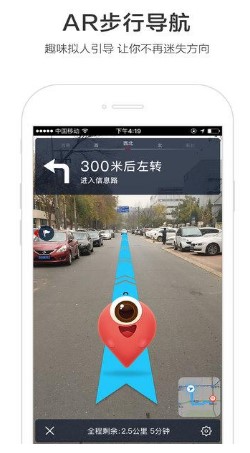 Above: A screenshot of Baidu Maps from their App Store page 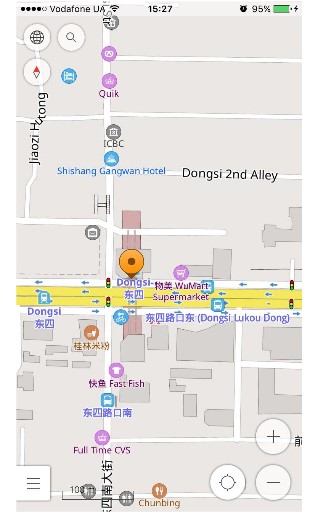 Above: A Beijing offline map in OsmAnd on iPhone

2. What about public transport?

Both the Beijing and Shanghai metro lines are easy to navigate, as they provide maps, exit maps, signs in pinyin (Chinese written in the Roman alphabet), and always list the direction trains are going. Still apps can make the task much simpler. After trying about 10 apps for each city on the App Store, I made a final choice. For Beijing, Beijing Subway 北京地铁 by TSP Holdings (iOS, Android) worked best; and for Shanghai, Shanghai Metro 上海地铁, also by TSP Holdings (iOS, Android). I never had a chance to try the Android versions of these, so while writing this post, I asked my friend to download both to her Motorola G4 Plus with Android 7.0. The app for Beijing never opened and crashed, she said. So Android users, install these apps at your own risk. 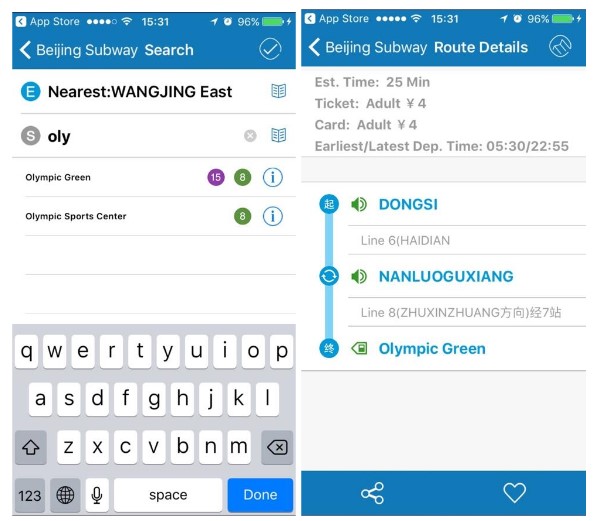 3. What about cross-country travel?

Fortunately, SkyScanner and all other flight search applications work great for finding local flights in China, but let’s talk about trains. Dreaming of going from Beijing to Shanghai on a super-fast train (350 km/h), I found out about Ctrip, which served as my gateway to the Chinese train ticket system. 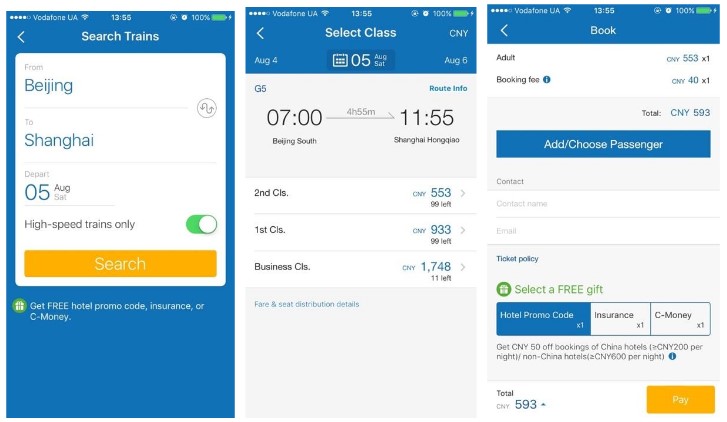 Keep in mind that all tickets bought through Ctrip have to be exchanged for real tickets at the railway station. And it’s better to arrive early as the queue is quite long.

4. Communicating with people who do not speak English at all

It’s true that many Chinese don’t know a single word of English. But the most important thing I learned in China is that hand language is a thing. Want to buy a mango and get it cut for you, and also you need a fork? Just mime it out with your hands. Turns out you don’t really need a single word to order. Same works for buying a pre-paid SIM card with a 4G data plan at a ChinaMobile store.

Still, sometimes you need to have a meaningful conversation. My first piece of advice: If you’re in China for business, e.g. a tradeshow or a conference, you really need to go with a person who speaks Chinese. From my experience (I went to GMIC Beijing for my company, mobile advertising platform Clickky), most Chinese companies have no more than one English speaker at the event. So imagine you drop by an exhibition booth and want to learn more about the exhibitor and their products but the English speaker is already engaged in a discussion with someone else. It happened quite often to me.

Some companies don’t have English speakers at all. Here’s my second piece advice: Don’t underestimate the power of voice recognition technologies. At the gate to Beijing Olympic Park, I tried to get directions from a guard. He immediately launched a voice recognition translator on his smartphone. The next day at GMIC Beijing, I found out about another translation app called Fanyi Guan (翻译官) made by Chinese web giant YouDao (Android, iOS). The interface is unfortunately in Chinese, but pictograms guide you just fine. Still, I’ve got a confession to make — I know some basic Chinese, and it’s easier to use the app if you can at least distinguish two words: 中文 (Chinese) and 英文 (English). 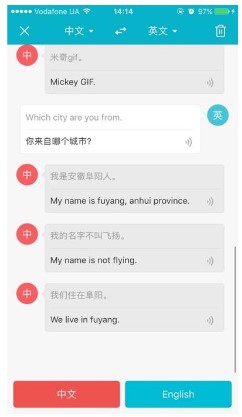 Above: The YouDao voice conversation app: press and hold one of the two buttons, indicating the language you’ll use, and start speaking.

The YouDao app also supports visual recognition in case you don’t know the name of the object you’re looking to translate. 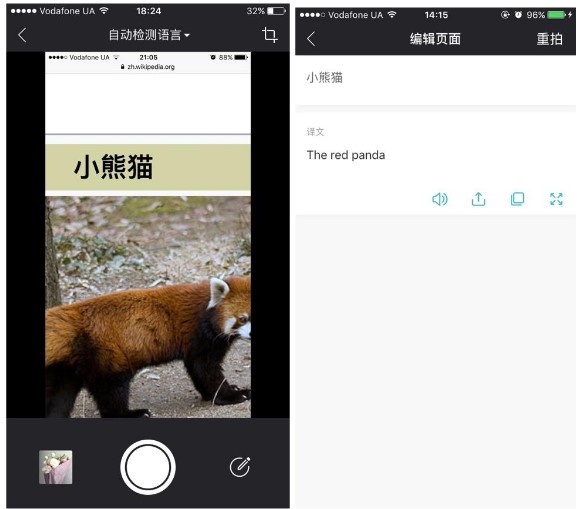 Above: Visual recognition feature — you can either select an image or make a photo on the go

The most popular Chinese messenger, WeChat (iOS, Android), offers a built-in chat translation feature, which is quite convenient. 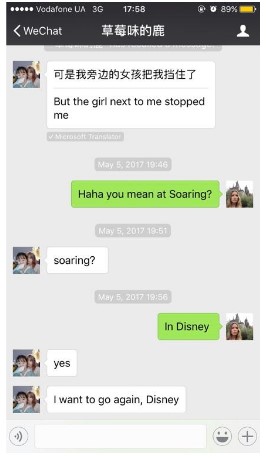 Above: The first message above shows the translation feature within WeChat

5. Speaking of WeChat — don’t think you can avoid it

Chinese people you meet will want you to add them on WeChat for almost no reason. Big companies will let you participate in giveaways at tradeshows only if you subscribe to their channel on WeChat or QQ — another popular messenger. I found WeChat to be quite user friendly, while QQ is extremely confusing. WeChat also comes in handy when you need to connect with non-Chinese friends who are also in China. The VPN failure means you can’t rely on keeping in touch with someone using Facebook Messenger; it’s better to switch your conversations to WeChat.

While people with Chinese App Store IDs now cannot download VPN apps, as a foreigner you are able to sign in to your local store. It’s better to take care of this at home in advance. For my journey I tried an application called Seed4Me that offers an extended trial period for mobile users, and it failed me only once (when I tried to set a meeting spot with friends with Facebook Messenger). Surely, there are tons of others today, including HideMyAss, ExpressVPN, VyprVPN, StarVPN, etc.

All in all, “The Great Firewall of China” shouldn’t stop anyone from visiting this country. You’ll be surprised how much China has to offer and how rapidly it is developing, no matter what.

Note: All opinions expressed here are my own and do not necessarily reflect the opinions of my company.