Name your fear. A sense of dread strikes you at the thought of having to hop onto a crowded train. You squirm as the doctor approaches you with a needle. You tremble and tuck your head between your legs as the plane warms up its engine. You freeze as your secret crush walks past you. The fear feels raw, instinctive, and no amount of clever argument can liberate you from its clutches, or so you think.

But as Bernard said in Westworld, “A little trauma can be illuminating.”

Over the past couple of decades we’ve seen the healthcare industry adopt virtual reality as part of exposure therapy, in which patients afflicted with psychological disorders that prevent them from living out their normal lives can confront their fears and phobias in a safe, controlled environment that isn’t subject to real-world consequences.

VR can address post traumatic stress and anxiety disorders with customized programs that can be repeated so there is a gradual desensitization to the psychological triggers.

“In the past, the way therapists would do therapy is they would get someone to imagine they were in the scenario. Here we can really bring that situation to life,” Peter Rossouw, manager at the Sydney Phobia Clinic, told Stuff last month. “If you put on that headset, you’re a patient sitting in the dentist chair, and the dentist is coming at you with the drill. And you can hear the noise. Everyone always pulls their head back.”

A paper released last February by the British Journal of Psychiatry found that VR simulations could help treat cases of depression by using the technique of “embodiment.” The participant role-plays in a scenario where an adult comforts a child, swapping between the two roles in order to experience what it feels like both to give and receive compassion. The technique kills two birds with one stone: It reduces the patient’s tendency to be self-critical and increases their capacity to be compassionate towards themselves.

“The results indicate that interventions using immersive virtual reality may have considerable clinical potential and that further development of these methods preparatory to a controlled trial is now warranted,” the study concluded.

So far this technology has mostly been benefiting those with more or less severe cases of mental illness that significantly disrupt their lives and have a real cost to society, particularly when left untreated.

Thanks to the surge of innovation in the VR industry over the past few years, which has made headsets increasingly affordable for consumers, this type of therapeutic experience is now available to anyone who wants to confront their personal fears, at their own pace and in total privacy.

Enter Tim Suzman, who decided last year to develop a VR app, Fearless, to free himself of his fear of spiders.

“Fear limits our actions and experiences. We evolved fear to protect us from danger, but often our fears are out of whack with our current reality.” Suzman told me. “If unwanted fears were eliminated, I think people could lead more fulfilling lives.”

The app is designed to gradually desensitize a perceived fear, level by level. Apparently after just two hours of immersion in the trigger-infested simulation, Tim was free of the phobia. Here’s the proof. 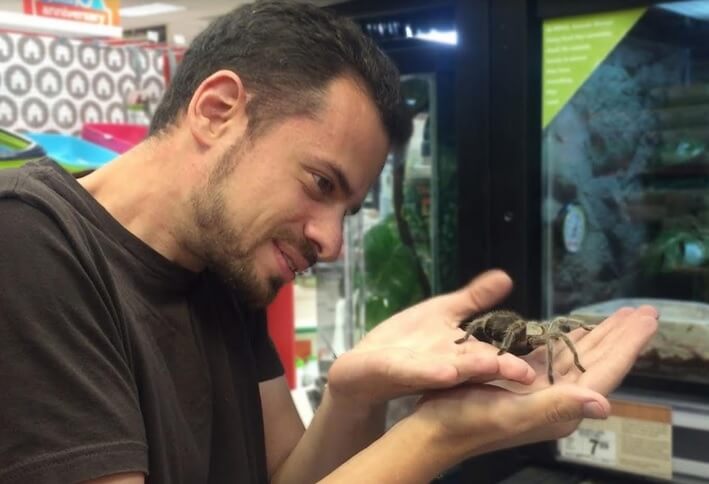 Above: Tim Suzman holding a tarantula after conquering his fear using VR.

Suzman has since raised over $650,000 to expand Fearless to handle fear of other insects like cockroaches and plans to later widen the net to include other categories like the fear of heights. The app is currently available on Oculus.

Fearless applies “gamification” elements to make the experience fun and motivating and to relax the user so they are more susceptible to change.

Another startup based in Tel Aviv is developing a VR game, Phobia, that helps you confront scenarios you secretly dread.

“The game is centered on the concept that on the other end of fear lies love,” said Liz Bas, founder of The Unlimited Project, the startup behind Phobia. “It hinges on the fact that we make fear-based decisions on a near hourly basis.”

One of the game scenarios involves as a woman alone in her apartment, realizing that she is the victim of a break-in. As a user, you have to make choices and experience the various consequences, one after another, learning as you repeat and reengage the same circumstances in new ways. The idea is to face your fears head-on and to engage them actively, empowering your sense of self.

“By living through our worst fears and finding a solution to these situations, we free ourselves of them,” Bass says in the Phobia promo video. “VR allows the human mind to experience fear in a safe way.”

Just as the application of this technology has shifted from the most severe to the more commonplace, my hope is that immersive simulations that play out scenarios both beforehand and in retrospect will eventually evolve into a common tool that people use to coach themselves and confront any mental hiccups that come their way.

In fact, we see this happening quite naturally in the industry, as in the case of the VR rehearsal simulations developed by VirtualSpeech, which I reported on back in July. Professionals in the area of Cognitive Behavioral Therapy were some of the first to contact the creators and lobby to extend the application of the technology to managing social anxiety disorders commonly triggered by simulating social settings like parties.