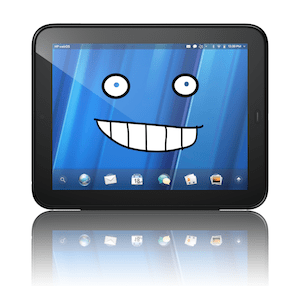 Hewlett-Packard is offering its previously discontinued tablet computer, the TouchPad, for the low price of $149.

The catch is that you only get that price when you purchase a new PC from Best Buy, according to the retail store’s website.

HP first released the TouchPad at a $499 price point in July to dismal sales, which prompted the company to reduce the price by $100 the following week to spur sales. Eventually, HP decided to get out of the tablet market completely, and it liquidated existing stock of the devices at a low $99 price point, which sparked renewed interest. In fact, the company even decided to produce one last run of TouchPads to meet the new demand.

But now, it seems that HP will begin selling its 32GB TouchPad again  — at least for the time being.

Consumers have the option of buying the tablet at the discounted price of $149 when buying an HP or Compaq PC at Best Buy. The regular retail price for the device is $600, which, as history has shown, won’t make them fly off the shelves.

The move by HP to sell cheaper tablets at a loss is clearly part of the company’s new strategy to boost sales in its PC division. Last week, new CEO Meg Whitman announced that the company wouldn’t be killing off its PC division and would instead continue to grow it as an integral part of the overall business.

The decision to sell tablets again is also likely to help HP recuperate some of the losses associated with the failed TouchPad launch. According to a report by All Things D, the company is taking an estimated loss of $178 per tablet. Also worth noting is HP’s contract with TouchPad component manufacturers, which makes HP accountable for all the cost associated with the halted production of the device.

Regardless of how long HP plans to offer its TouchPad deal, eventually sales of the device will end. Any prolonged death of the TouchPad at this point is likely to minimize the massive losses.