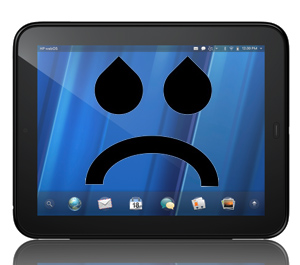 When HP says it’s exiting its hardware business, you’d best believe. The company confirmed today that in addition to spinning off its PC hardware business, it’s also killing its webOS devices, including the TouchPad tablet, as well as the Pre and Pixi phones.

HP isn’t giving up on webOS entirely. The company said in its statement today it “will continue to explore options to optimize the value of webOS software going forward.” But the future for the former Palm operating system, which at one time was considered to be a worthy competitor to Apple’s iOS, is certainly not sunny.

HP bought Palm for $1.2 billion in 2010, mainly for the company’s webOS mobile software, which wowed the tech world when it debuted in 2009. At the time of the acquisition, HP said that it wanted Palm for more than just its smartphone experience — HP had grand the ambition to bring webOS to netbooks and tablets as well.

The company released its $499 TouchPad last month to lukewarm reviews, and not surprisingly, it didn’t sell very well. HP went as far as to permanently reduce the TouchPad’s price by $100 last week to spur sales. But now it seems like the company was just trying to get rid of its TouchPad stock as quickly as possible. That doesn’t bode too well for partners like Best Buy, who is now reportedly sitting with over 240,000 unsold TouchPads.

HP president and chief executive Léo Apotheker reiterated in June that the company intended to license webOS to others. Now it seems like that’s the only path ahead for webOS. Indeed, it seemed strange that HP would directly compete with other companies who wanted to bring webOS to smartphones and tablets, so at least now it can avoid that headache.

WebOS had a lot going for it when it was first announced. It was stylish and easy-to-use, like Apple’s mobile OS, but it was also built with multitasking in mind which allowed users to seamlessly juggle multiple applications. The “card” interface developed by Palm for webOS would eventually be replicated elsewhere, most notably in RIM’s PlayBook QNX OS. When the TouchPad was announced earlier this year, I argued that it made clear the iPad’s severe multi-tasking deficiencies — even with the inclusion of multi-tasking in Apple’s iOS 4.

But HP has been unable to get enough webOS devices out the door to make it sustainable. Its app ecosystem has been lackluster, adding only 8,000 apps, compared to Apple’s some 500,000 iOS apps and Android’s 200,000 apps.

The company also released its tiny Veer smartphone this year, and announced the Pre 3 for release later this year — you can pretty much give up on ever seeing that product now.