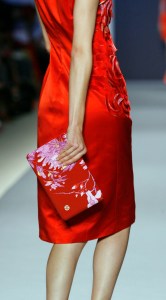 Hewlett-Packard is announcing today three new models in the HP MIni 1000 family that are its thinnest and lightest entries in the growing category of computers known as “netbooks.” One of them, a colorful version created by fashion designer Vivienne Tam, could easily be mistaken for a clutch purse.

The models are targeted at “information snackers,” or people who want to get on the Internet, quickly and easily. They include mobile professionals, media enthusiasts, and “fashion-forward women.” The “ultra portable” computers are less than an inch thick and weigh 2.25 pounds. Yet the keyboards are almost full size, at 92 percent of the typical keyboard size.

The netbook category is starting to take off, with competing versions from companies such as Asus, Acer, and Dell. But many of those versions aren’t close to having a full-size keyboard. Notably, Apple doesn’t have an entry in this category yet, except for the pricey and larger MacBook Air.

Back in April, HP released the first HP Mini model aimed at college students and which was too small to be considered a laptop computer. The HP 2133 Mini-Note weighed 2.6 pounds and had an 8.9-inch screen. That one had a C7 processor from Via Technologies, but HP is using an Intel Atom 1.6 gigahertz processor in the newest machine. Notably, there is no Windows Vista version.

That machine was aimed at a relatively narrow market and had ruggedized protection (featuring extra protection for hard drives and displays, and sealed keyboard). The new models don’t have that protection. They’re aimed at general consumers and are targeted at consumer-friendly prices well below the standard $499 laptop prices, said Kevin Wentzel, technical marketing manager at HP. 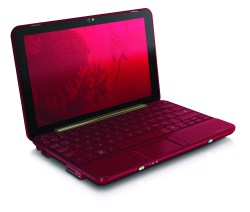 The newest versions use Intel integrated graphics chip sets, which means that you’re not going to want to play hardcore games on this machine. The designs sport a piano-black finish with HP Imprint swirl design. This is a kind of plastic finish where the designs are embedded deep in the plastic. Hence, they don’t fade over time.

The standard black version will debut with Windows XP. In the first quarter, the company will also launch a Linux version with HP’s own user interface geared to make Linux more user friendly. The machines include an Ethernet jack, two USB ports, a built-in webcam and microphone. It has wireless networking capability via Wi-Fi (including 802.11n) and later versions launching in December will have built-in EVDO connectivity (for connecting to the Internet via a cell phone data signal). 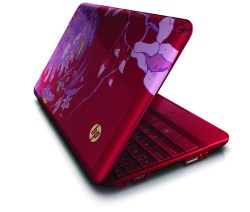 You can buy one with an 8.9-inch screen or a 10.2-inch screen (for $50 more). And you can also choose between a mechanical hard drive or a solid-state flash memory drive. The hard drive can store 60 gigabytes, while the flash versions can store eight or 16 gigabytes.

The limited edition HP Mini 1000 Vivienne Tam edition will be the attention grabber. It comes in red with a peony-flower inspired design that will match the fashion designers spring 2009 collection. Tam labeled the computer the world’s first “digital clutch.” It ships with an embroidered sleeve to protect the exterior. It comes with a 1.6 gigahertz Atom processor, Windows XP, and 1 gigabyte of memory. The shift key has a “double happiness” symbol from the Chinese language. 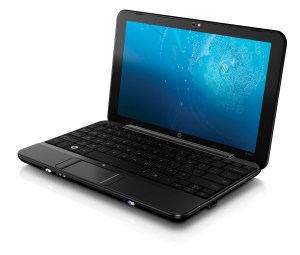 The HP Mini 1000 with Linux will have HP’s Mobile Internet Experience interface, which has a rotating visual menu of choices. You can click on icons for videos, photos, music, or email to get to them quickly. It comes with instant messaging, email, and Skype video chat. The Linux version is a certified version of the free Ubuntu version of Linux.

Each machine has a slot for a HP flash memory expansion drive, which can add 2, 4 or 8 gigabytes of storage. It also has a three-cell Li-polymer battery with a three hour battery life. A 6-cell battery will be available in January.