HP is gearing up to unveil its long-awaited tablet running Palm’s webOS software. It will show off the device at the Consumer Electronics Show in Las Vegas next month, according to Fox News’s Clayton Morris, who also managed to dig up some details on the device.

We reported in September that HP was abandoning its plans for an Android tablet and was instead focusing its energy on getting the PalmPad out in early 2011. A CES debut would fit into the company’s schedule, and it would also give Palm a leg up on Apple’s second-generation iPad announcement. At the same time, CES will definitely be filled with tablets of all shapes and sizes, so it’s going to be tough for Palm to stand out.

Morris says that HP will debut three tablet models, each running a new version of the webOS operating system (version 2.5.1). They will likely feature screens around 10 inches, front and rear-facing cameras (at 1.3 and 3 megapixels) and compatibility with Sprint’s 4G wireless network. For video output, the PalmPads will sport a mini-HDMI connection. They may also have a USB 3.0 port, which doesn’t make much sense to me on a tablet but should allow for extremely fast data transfer between the tablet and other devices.

A fourth version won’t be shown at CES and will be customized for university students. It may feature a smaller 8.9-inch screen, according to Morris, and will also “have access to a university’s internet educational software.”

Morris describes the PalmPad designs as a spin-off of the “never released” HP Slate tablet. Actually, HP did release the Slate, which ran Windows 7, for $799 in October — it’s just that nobody cared. VentureBeat’s Dean Takahashi deemed the tablet a non-threat to Apple’s iPad.

I wouldn’t be surprised if HP decided to reuse its Slate hardware for the PalmPad, but I hope that it gets a redesign so it doesn’t appear too similar to the failed tablet. 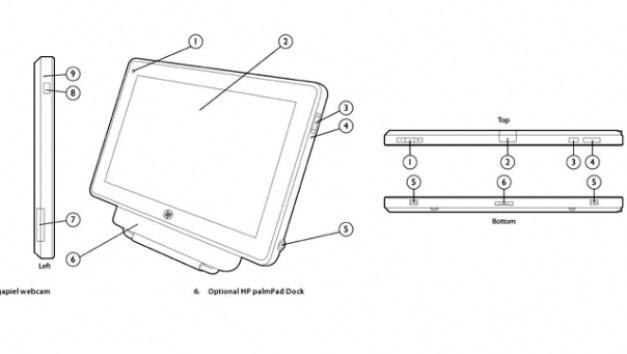