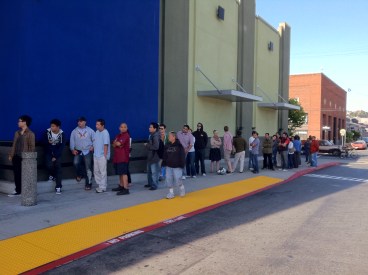 To be fair, $99 is a pretty sweet price for a tablet computer.

Dozens of people lined up outside Best Buy in San Francisco today for a chance to pick up the now dirt-cheap Hewlett-Packard TouchPad after the company started a fire sale for the poorly-selling tablet.

A few people initially lined up at the Best Buy at 13th Street and Harrison Street at around 8 a.m., with the larger part of the crowd coming in at around 9:30 a.m. The store did not open until 10 a.m., and then it quickly sold out. Managers told customers the Best Buy store at Geary Street and Presidio Street had HP TouchPads in stock.

The Best Buy at Geary and Presidio had 10 TouchPads, but there was a huge line outside that store before it opened at 10 a.m., managers told VentureBeat’s tech guru Christopher Peri. Most other Best Buy stores also received 10 TouchPads, so there was likely a large line for the device at other locations across the country.

The TouchPads available today were a second shipment sent to Best Buy stores following a quick sellout of the devices on Friday, when HP slashed the 16 gigabyte TouchPad’s price to $99 and the 32 gigabyte TouchPad’s price to $149. Best Buy initially said it wouldn’t offer the discount at US stores, but some lucky customers were still able to get their hands on the tablets. Over the weekend it was also possible to snag a cheap TouchPad via HP’s own site and through other retailers.