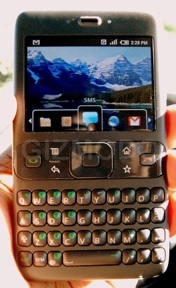 Mobile phone manufacturer HTC (High Tech Computer) has given a name to its phone built around Google’s Android platform, the ‘Dream’. The device could be the first phone available that utilizes Android, according to InfoWorld.

Due out towards the end of this year, the phone is said to feature a large touchscreen display but will also have a full QWERTY keyboard. The latter is something which may make it more attractive to certain consumers than Apple’s iPhone, which utilizes a virtual keypad rather than a physical one. This ‘Dream’ keypad would either slide down or swivel out so as to fit on the device’s 5 by 3 inch frame, according to InfoWorld’s source.

Let’s just hope the device looks more attractive than the leaked pictures (shown on the left) of the Android prototype which resembled a TI-83 calculator.

Samsung is also said to be working on an Android device which could come out around the same time. Both Samsung and HTC are members of Google’s Open Handset Alliance, a group of developers committed to making a better mobile phone.

Proponents of Android say that it offers a more open environment from which to develop than a device such as the iPhone. Apple recently unveiled its SDK (software development kit) but some application makers have complained about the constraints of the platform (our coverage).

This news follows yesterday’s that Google has seen a surge in web usage on mobile devices (our coverage). Data earlier in the week showed that most iPhone owners use their device to surf the web (our coverage). Web browsing will be a key component of all Android-based phones.

Also see our thoughts on some of the security risks that could rise from these new breeds of phones.