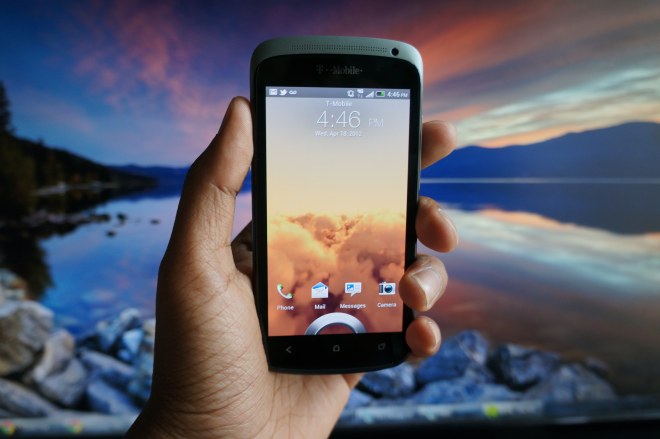 T-Mobile’s iconic ad girl, Carly, has been in the news quite a bit lately, after ditching her pink dresses for black leather and a Ducati in the carrier’s new ad campaign (Lisbeth Salander says hello, by the way). But in many ways, the new HTC One S makes a greater statement for the struggling carrier.

The 4.3-inch One S, available on April 24 for $199 (with a two-year contract, and after a $50 rebate), is a bundle of superlatives. It’s HTC and T-Mobile’s thinnest phone ever, at just 7.95 millimeters; it’s T-Mobile’s fastest phone ever, thanks to its powerful dual-core Snapdragon S4 processor; and it’s the sleekest Android handset I’ve tested so far, due to its impressive unibody design.

The phone is by far the best device T-Mobile has to offer, but it’s not without its flaws (more on those below). The real question: Is it enough to stop T-Mobile from hemorrhaging subscribers? And can it keep the T-Mo faithful from pining after the iPhone (which T-Mobile has no signs of getting this year)?

The good: Finally, an Android phone that feels sexy and tough

I’ve already spent some time with HTC’s entire new One lineup at Mobile World Congress, but I was still taken aback when I opened up the box for T-Mobile’s One S. The phone’s design is immediately striking, with smooth, ergonomic curves, and an aluminum unibody design (except for the antenna section) that encourages you to hold it. It’s thin without feeling brittle, which also makes it perfect for sliding into just about any pocket.

Unfortunately for T-Mobile customers, its One S lacks the futuristic “microarc oxidation” process that the black version of the phone sports, which is supposed to give it a feathery touch. Still, I have no complaints about the anodized gray aluminum in T-Mobile’s One S. (And it may be for the better, as the microarc models apparently have chipping issues.)

Just like the iPhone and Nokia’s Lumia 900, the HTC One S provokes an emotional response that Android devices, including the flagship Galaxy Nexus, have been lacking for some time. The phone is well-suited for Android 4.0 Ice Cream Sandwich, an update which brought some much-needed heart and soul into Google’s mobile OS.

Speaking of Ice Cream Sandwich, the combination of Android 4.0 and the HTC One’s Snapdragon S4 processor really makes the One S scream. It’s one of the few Android phones (along with the Galaxy Nexus) that have let me effortlessly launch apps, move between screens, and do just about anything without stalling. Of course, HTC had to ruin things by including the latest version of its Sense interface, which adds an unnecessary UI layer on top of Android. Sense 4.0 is less of a distraction than past versions, but it’s still fairly useless (more on that below).

One of the big draws for HTC’s entire One lineup is the improved camera software and hardware, which the company calls “ImageSense.” The One S includes an 8 megapixel camera with an f/2.0 lens and a backside illuminated sensor — basically, it should be able to snap really nice pictures. The camera can also shoot 1080p high-definition video at 30 frames per second.

It’s helped by HTC’s new camera app, which is the best camera software I’ve ever used on a smartphone. The app loads almost instantly, without fail, and it lets you take both video and pictures from the same screen. Notably, you can also snap photos while video is being recorded (which are basically just screenshots at the video resolution). Check out a few test shots from the One S camera in the gallery below.

The One S supports T-Mobile’s fast 42 megabits per second HSPA+ network, though unfortunately I didn’t get to see the device’s full speeds. Earlier today, T-Mobile sent out a note to reviewers saying that early versions of the phone couldn’t take full advantage of the network, though it promised that the phone will get a software update to fix the issue before it’s released.

The bad: HTC Sense and Beats Audio need to die

Back when Android a barren wasteland of design and user-friendliness, HTC’s Sense interface was a breath of fresh air. The company had been working on customer interfaces since the days of Windows Mobile, and in Android, HTC had found the perfect platform for perfecting its interface ambitions. But Android slowly evolved, and now with Ice Cream Sandwich, Google has finally created a mobile OS that feels as natural as iOS.

At this point, Sense really isn’t helping Android — it’s just getting in the way. Sense 4 is less cumbersome than the last version, which slowed down Android phones with flowery effects and transitions, but it still makes the One S feel slightly removed from its Android core. The Sense dialer is a nightmare, for example.

And because of Sense 4, HTC also didn’t include the software-based Android navigation buttons found on other ICS devices. On the One S, the Android Back and Home buttons are once again physical keys at the bottom of the phone. There is a software menu button, but it clashes horrible with the design of Android 4.0.

At least Sense gives us a nice way to multitask on Android 4.0, with a card-like interface that’s reminiscent of webOS.

The HTC One S is also T-Mobile’s first device to include Beats Audio hardware, but that really doesn’t mean much. The audio technology, popularized by Dr. Dre and his ugly headphones, distorts music on the phone by pumping up the bass and volume. It’s honestly a shame that HTC invested $300 million in Beats Audio, because the brand is shaping up to be as much of a marketing gimmick as Monster Cables.

It’s also a shame that, for a device which sports some of the best Android hardware ever, HTC skimped on the One S’s display. It sports a 4.3-inch screen Super AMOLED screen running at a 960 by 540 resolution, and as is typical for that screen technology, the One S has slight issues with color accuracy. The resolution also feels low after prolonged usage, but it may just be my eyes are spoiled by the crazy high pixel density on the new iPad and iPhone 4S.

If screen quality is important to you, check out the 4.7-inch HTC One X, which sports a higher resolution Super LCD screen.

The takeaway: The best phone yet on T-Mobile, and one of the best Android devices

While T-Mobile customers still don’t have the iPhone, I have a feeling that the One S will be more than enough to tide over many of them. It’s thin, light, and offers one of the best Android experiences yet (aside from Sense). I was a bit disappointed that T-Mobile didn’t land the bigger HTC One X, but after testing out the One S for several days, I’ve grown to appreciate the thinness its smaller screen allows.

HTC promised earlier this year that it would focus on delivering fewer devices, but with an increased emphasis on quality. The One S — from its design, to its powerful hardware — proves that HTC has followed through with that promise.