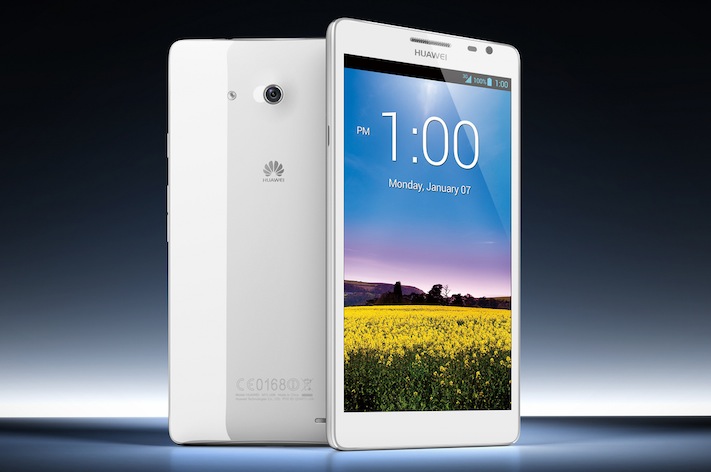 If size is all that matters, Huawei has just won: Its Ascend Mate smartphone boasts a 6.1-inch touchscreen, making it either the largest phone ever or the most compact tablet. Just try holding it up to your ear when you need to answer a call.

Sure, we made these jokes last year about Samsung’s Galaxy Note, which, with a 5.3-inch screen, seemed massive at the time (and entirely too big to hold up to your head like any other phone). The Galaxy Note II has a 5.5 inch screen, but that’s just a tiny bit more than the first model. And the Galaxy Note went on to become a huge hit in 2012.

So why not go even bigger, Huawei’s executives must have asked. Why not, indeed? The Huawei Ascend Mate is big in almost every way. It has a 1.5 GHz Hi-Silicon quad-core processor and a 4050 mAh battery, plus an 8 megapixel camera on the back (it looks like it sticks out a bit, which is odd given how much room there is inside the case) and a 1 megapixel front-facing camera. It has stereo audio recording capabilities, with noise reduction, and includes Dolby audio enhancements. It’s running Android 4.1, aka Jelly Bean, the latest shipping version of the OS. The only thing that’s not huge is the screen’s resolution, a relatively paltry 1,280 by 720 pixels. Good enough for HD, sure, but way too small for showing 4K media.

Huawei says the phone will be available in China only, starting in February, but has not announced the price.

The company’s press release includes a quote from Richard Yu, the chief executive of its consumer business, that hints at the reason for making such a large device: “The Huawei Ascend Mate breaks barriers to deliver a supercharged entertainment, communication and creative experience for all your personal and professional needs.” I interpret that to mean that they want this phone to do everything, including entertain you, and perhaps the size isn’t such a barrier to usage among Chinese users.

My question is, why stop at six? Add phone capabilities to a Nexus 7 or a Kindle Fire, and you’d have a seven-inch smartphone instead of a tablet. Even a 10-inch iPad could become a phone, if only Apple had Huawei’s crazy, stop-at-nothing genius. Or 27 inches, like Lenovo! Go for it, Huawei engineers!