If Europe is any indication, Apple and Samsung might be in trouble should the major Chinese smartphone brands ever get a significant foothold in the U.S. market.

According to a new report from market research firm Canalys, China’s Huawei saw sales of its smartphones in Europe grow 38.6 percent to 7.4 million units in the first quarter of 2018, a big jump compared to the same period a year ago.

It’s an impressive gain, given that the overall smartphone market in Europe declined 6.3 percent in Q1, the firm reported. And those Huawei figures don’t include the impact of the new P20 and P20 Pro that the company announced in a splashy ceremony held in Paris at the end of March.

During the same period, Samsung shipped 15 million smartphones in Europe, a drop of 15 percent from Q1 2017. Apple shipped 10 million iPhones, a drop of 5.4 percent from a year ago, according to Canalys, which also noted that the iPhone X remained the single best-selling phone in Europe.

While Apple continues to post record revenues thanks to its higher-priced phones, like the iPhone X, its unit sales have been relatively flat over the past three years. Meanwhile, Samsung debuted its new Galaxy S9 flagship series in late February but has been gradually letting go of the lower-end market in search of more profitability. 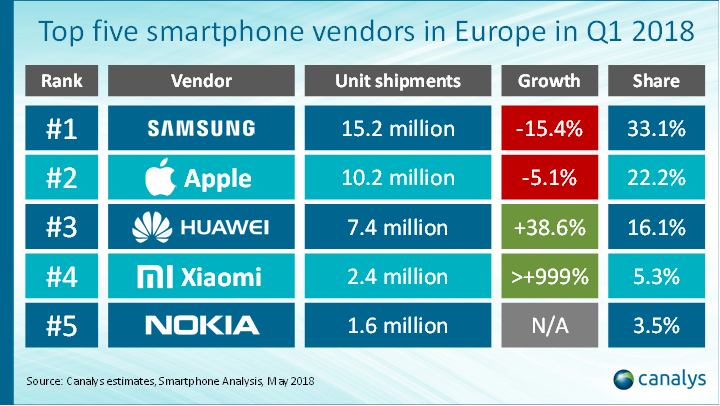 But Huawei’s surge here is notable given that the company only significantly entered the European market three years ago. To a lesser degree, China’s Xiaomi is also making inroads in Europe, but it is still relatively new to the market.

European carriers seem perfectly comfortable partnering with the Chinese giants, whereas U.S. carriers have so far refused to strike such deals — thanks to political concerns that Huawei’s and Xiaomi’s relationship to China’s government could make their products a security risk.

This  means that — for the moment — Apple and Samsung remain largely shielded from competing with the two Chinese brands in the U.S. Consumers in the U.S. can purchase Huawei and Xiaomi phones online at full price, but the companies don’t benefit from the marketing muscle of telecom partners or the subsidies they offer new customers.