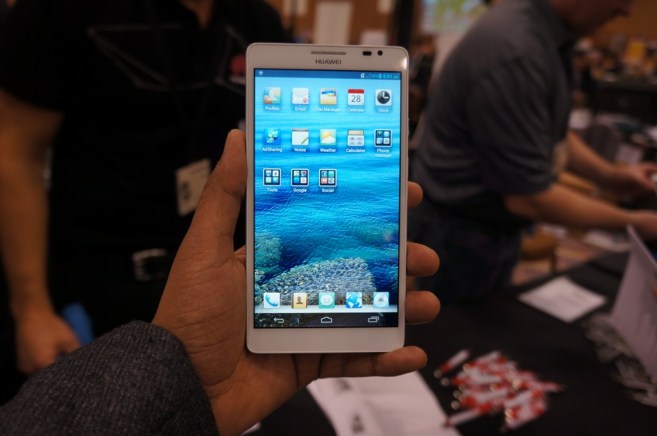 This CES has been fairly quiet when it comes to new smartphone announcements, so Huawei’s reveal yesterday of the massive Ascend Mate was a nice little reminder of previous years. But after playing around with the phone for a few minutes, I can confirm that it’s about as silly as you’d imagine.

The Ascend Mate simply looks and feels massive. I can’t imagine anyone finding it comfortable enough to use as their daily phone (let alone fit it into their pocket).

I had similar initial reservations about Samsung’s Galaxy Note in 2011, but at 5.3-inches, at least it looked like a typical phone and fit into your pocket. Samsung also managed to make its successor, the Note II, thinner and lighter (while also squeezing in a slightly bigger screen).

Avoiding just about everything great about modern smartphone designs — light weight, thin frames, a focus on pragmatic features — the Ascend Mate simply seems to say, “Fuck you, I’m big.” That may not be the best way to market a phone.

Below, we’ve compared it to the iPhone 4, Nexus 4, and the iPad Mini. Not surprisingly, when placed against the iPad Mini, the Ascend Mate looks far more like a tablet than a phone.

Ultimately, I can sum up the way I feel about the Ascend Mate with my response to Huawei’s rep when I first held it. “No, just no.”