If you look carefully through 2018’s numerous 5G device announcements, one concerning thread has persisted since early in the year: a hint that early 5G devices might be unappealingly large. Qualcomm acknowledged and downplayed the issue at its February 5G summit, suggesting that early 5G phones might need to be a little bigger, but with every passing announcement, it’s becoming harder to imagine a small 5G phone.

I’ve been seeing small red flags for months — I’ll get to those in a moment — but a new Qualcomm press release really set off alarm bells this week. Working with Ericsson, the leading 5G chipmaker announced that it successfully completed a 5G network phone call using a “smartphone form factor mobile test device.”

Dated September 5, the accompanying press image (above) uses a classic iPhone-style “device in the hand” pose to show off a 5G test phone that looks bigger and clunkier than any phone normal people would carry. Huge bezels, too many sensors to even fit in a “notch,” and roughly cut speaker and microphone holes make very clear that this is a prototype, not a final device. But at a time when phones have evolved into glass sheets with metal cores, it’s such bad imagery that one wonders why it’s even being shared at all.

It’s easy to completely write this image off as nothing but an unrepresentative sample device, and as someone who covers 5G everyday, I’d love to do that. But as coverage of the 5G test by FierceWireless notes:

The significance of [Qualcomm’s test] call is it involved a device that is in the size range of a smartphone, as opposed to the size of a bus or other oversized object. Generally … devices are huge until engineers have a chance to get the components miniaturized — something Qualcomm, for one, worked on for some long days and nights.

My key concern is that we’re now concluding the first week of September 2018 — only months before AT&T is supposed to be launching its first mobile 5G networks — and a top 5G chipmaker is showing off a recent image of a brick-sized phone. If 5G is truly ready to go mobile, shouldn’t there be a plausibly small test device at this point? (Update: See Qualcomm’s response below.)

Add to that the earlier, smaller red flags I mentioned:

Unfortunately, while 5G has the potential to offer improved speeds and lower latency across all of these frequencies, it appears that the biggest performance boosts may come from the millimeter wave devices. But if millimeter wave phones are going to look like that, no one’s going to buy them. Smartphone makers know as much, and the result could be that many early 5G phones — perhaps even most early 5G phones — will sacrifice speed in the name of pocketability.

Above: What’s believed to be Xiaomi’s Mi Mix 3 is shown with a 5G signal on the screen and dual-band support.

On the other hand, it’s possible that device makers have figured out ways to solve the size problem. Xiaomi teased an image of an upcoming phone, possibly the Mi Mix 3, connecting to both 3.5GHz and millimeter wave 28GHz 5G networks. While the phone is definitely on the large side, it doesn’t look much bigger than rivals’ standard “Plus” models. So perhaps Qualcomm’s test phone is particularly oversized because it’s built to support an uncommonly high frequency range … or maybe not.

For consumers like you and me, the key details we’ll need to know before buying 5G phones are what type of 5G hardware they actually have inside and what type of 5G towers are built in the areas where we live and work. After all the hype over 5G’s potential, chipmakers, device makers, and network operators are going to need to clearly explain to consumers what they’re actually getting — and not — in early devices. Since those 5G rollouts are beginning within months in the United States, that process should start happening sooner rather than later. 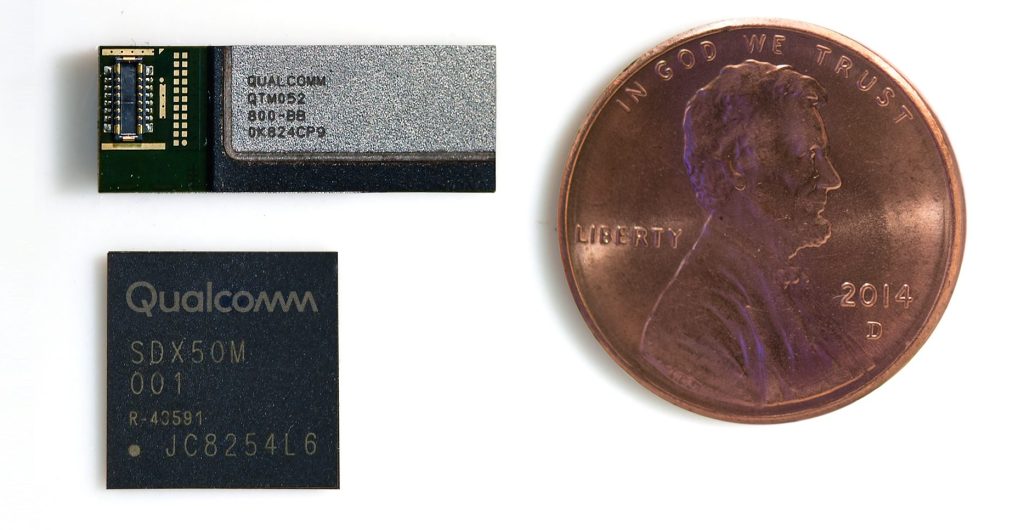 Above: Qualcomm’s millimeter wave antenna is shown above an X50 modem; several antennas are expected to go inside the bezels of 5G phones.

Update at 10:45 a.m. Pacific: In a series of tweets discussing this article, Qualcomm’s Bassil Elkadi provided some much-needed reassurance on the current state of 5G device engineering, noting that while the concerns about device size are “all valid,” the company is “laser focused on ensuring smartphone size is not impacted” by inclusion of millimeter wave hardware.

From a chip and technology perspective, we are delivering 5G mmWave modules for 5G smartphones that will ensure size is not impacted. More on this soon.

Initially, it was expected that two to four of the company’s millimeter wave antenna modules might be used in typical 5G phones. Qualcomm is currently saying that it expects two to three of the modules to somehow fit into the bezels of a standard smartphone, which obviously have been shrinking with each passing generation of devices.

Regardless, Elkadi emphasized that the large profile of its test phone should not be assumed to be representative of what finished 5G devices will look like. The test phone is “not optimized for size” and is ruggedized for handling in the field; rather, it’s the company’s device reference designs — which haven’t been shown publicly — that will determine the sizes of upcoming 5G phones.