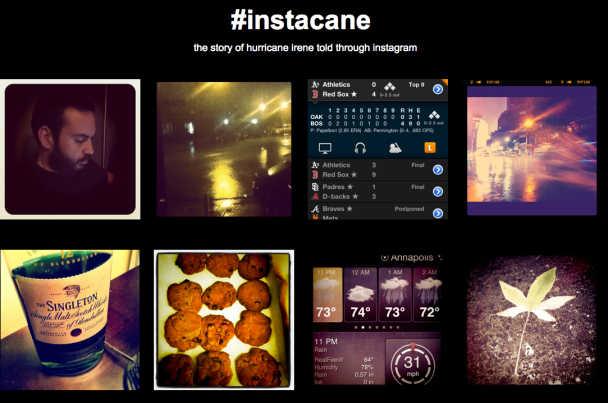 Instagram users hunkered down in New York, New Jersey and other cities in the path of the rather menacing-looking Hurricane Irene are chronicling the mayhem through an online Instagram photo album called Instacane.

Hurricane Irene began pounding New York and nearby states this evening, prompting a flood of content related to the hurricane on social media sites like Twitter, Facebook and — yes — Instagram. The photo-sharing site, based in San Francisco-based, has more than 5 million registered users who add more than 900,000 photos per day.

“Side project, in time we should have been sleeping!” he told to VentureBeat. “Built in the calm before the storm.”

It looks like they are including photos that include the tag #instacane that are posted through Instagram. Both site owners are also hunting down photos on Twitter.