IBM doesn’t actually make any of the mobile computers people carry these days — smartwatches, phones, tablets, or laptops — but that isn’t stopping the legendary computing pioneer from patenting ideas that might become viable in the future. As spotted by Dutch publication LetsGoDigital, IBM has successfully patented a smartwatch that physically transforms into a wrist-mounted phone or tablet, a concept that’s implausible today but could become real with advances in display technology.

The original patent depicts a smartwatch with a tall, nearly bezel-free screen that’s larger than the displays of most current devices, displaying the time atop weather details and icons for four apps. Somehow, the screen unfolds to a more smartphone-like array of four panels, using the extra space to display nine app icons, an internet search bar, and an expanded time and weather area. Then the screen expands to a wide area with eight total panels, simultaneously displaying a tablet-like array of 16 icons, a newsfeed, search bar, and time/weather information. Renderings by LetsGoDigital amplify the original filing with nicer looking screens that use the display areas somewhat differently.

As IBM explains, the concept is to expand the screen using “a set of slides that form a storage compartment within the housing” — capable of recognizing and utilizing the larger display size as additional panels slide out. While the major implication of the concept would be to radically expand a watch display to tablet size, IBM also shows configurations where a small watch screen could be doubled or tripled to sub-smartphone size using smaller panels, somewhat like a table with folding extenders. 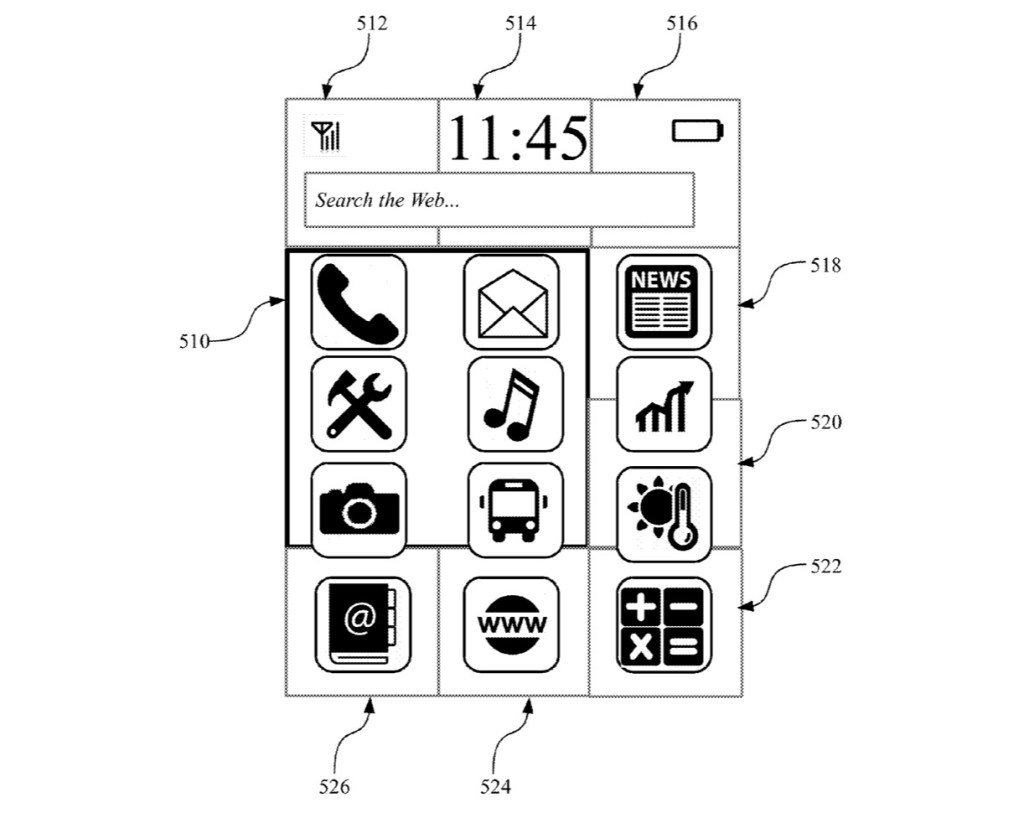 Putting the readiness of slide-out screen technology aside, it seems unlikely that we’ll see an IBM device like this anytime soon. Redditors point out that IBM rewards employees for patenting even “stupid” inventions, tying patents to promotions and internal recognition while giving the company both licensable innovations and defensive patents for lawsuits. Even so, as smartwatch processors continue to become more capable, tiny displays will likely be their biggest bottleneck, making sliding, folding, stretching, and AR-assisted displays more desirable.

Major companies such as Samsung and Huawei are just beginning to offer phones that use folding screens to expand into tablets, albeit at sky-high prices and with questionable designs. Smaller rivals such as Nubia have developed smartwatches with atypically large displays and phone-like features.