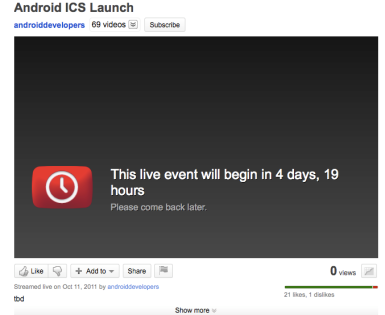 Google’s Android operating system update Ice Cream Sandwich will officially launch on October 11, according to a placeholder set up on the “androiddevelopers” Youtube page.

The text on the page says, “This event will begin in 4 days, 19 hours. Please come back later.” The description text reads, “tbd.”

Mobile telecommunications company Samsung is also having its Unpacked event that day, where it is rumored Samsung’s Nexus Prime phone will be unveiled. There are also rumors the Nexus Prime will be the first Android phone to run Ice Cream Sandwich, so the timing of the two releases is fitting.

Currently, more smartphones run Android than any other mobile operating system in the world, with iOS coming in second.

Apple announced at its October 4 press event that iOS 5 — the operating system running on iPhones, iPads and iPod touches — will be available for download on October 12th, a day after the Ice Cream Sandwich launch.