Dropbox announced this morning that it has grown to 175 million users — and that it wants to replace the hard drive.

“Sync is the new save,” chief executive Drew Houston said as he announced the Dropbox Platform at the company’s first developer conference.

Dropbox will undoubtedly announce more details on that this afternoon, with Python author, former Googler, and current Dropbox übergeek-in-residence Guido van Rossem scheduled for a “Platform Announcement” speech this afternoon. But the broad strokes are clear from press materials Dropbox has released. 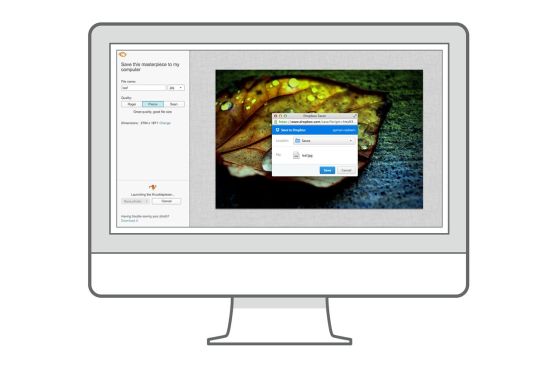 The new Dropbox platform is an API for developers who want to enable users to create, access, and save documents, files, or data in their apps — and make it cross-platform compatible and accessible. What Dropbox is calling the “Datastore API” provides storing and syncing beyond files, the company says, adding that “structured data like contacts, to-do items, and game state can be synced across devices and platforms effortlessly.”

“Today is about making life easier for all of you,” Houston told the audience of developers.

Above: Save to Dropbox.

With just a few lines of code, Dropbox says, developers can add embed the new Datastore API in iOS apps, Android apps, and anything using Javascript. Save and sync operations work online or offline, and it has built-in conflict handling for multiple user safety. The result, Dropbox says, could be a game you start on your Android smartphone during your commute and finish on your iPad once you reach home. Or changes to your to-do list made online could sync up to an app on your phone.

The goal is to unify your data on a single platform — a data platform — not a hardware or software platform. In other words, a platform beyond iOS or Android, or Windows versus Mac, or even type of device. A pure cloud platform.

”We have all these companies making all this amazing stuff, but they’re punching each other in the face,” Houston said.

Now, perhaps, he’s punching all them in the face.

Because surely, if Dropbox is successful, data is the ultimate platform. Ultimately, you don’t really care where your data is; you just care that it’s saved, that it’s safe, and that you can access it whenever and wherever you want. This platform has a real shot at delivering on that goal — more so than any platform that is particularly tied to any one device, series of devices, or class of devices.