The IDC’s mobile numbers came in today and they agree with earlier numbers from Strategy Analytics: Android is killing it. Android now has 79.3 percent global market share, to iPhone’s 13.2 percent.

However, it’s just possible that this could be the calm before the Apple storm.

“The iOS decline in the second quarter aligns with the cyclicality of iPhone,” IDC researcher Ramon Llamas said in a statement. “Without a new product launch since the debut of the iPhone 5 nearly a year ago, Apple’s market share was vulnerable to product launches from the competition.”

That was what Tim Cook warned Wall Street, of course, in April. And it has resulted in a significant decrease in iOS share. Llamas, however, sees hope on the horizon. 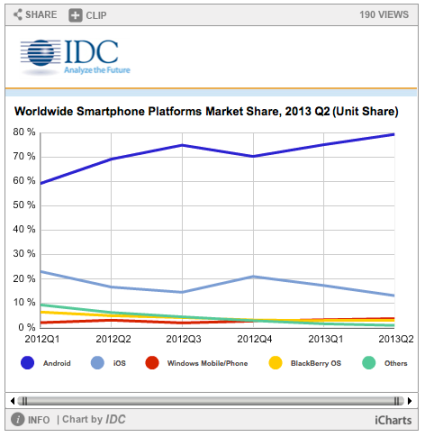 “But with a new iPhone and revamped iOS coming out later this year, Apple is well-positioned to re-capture market share,” he said.

Almost certainly, Apple will release two new iPhone models in September or October: a revamped iPhone 5S, and a new, cheaper, plastic-bodied iPhone. That will stimulate demand at the high end of the market and the low end simultaneously, and should perk Apple’s numbers up significantly, as Llamas suggests.

Whether that will be too little, too late is an open question, but there’s no doubt that Cupertino has left the door wide open for Samsung and Google to dominate the smartphone market by simply being slow to innovate, slow to expand models, and slow to get really aggressive. I believe I called that eight months ago.

But I was far from the only one. And the cost for Apple is seventh place in the world’s biggest and fastest-growing mobile market.

The other big news in IDC’s smartphone numbers is Windows Phone.

“Windows Phone posted the largest year-over-year increase among the top five smartphone platforms, and in the process reinforced its position as the number 3 smartphone operating system,” the IDC said.

Windows Phone surged ahead of BlackBerry with the fastest growth of any mobile platform, selling 77 percent more devices while posting a new high of 3.7 percent market share. That’s still small, of course, but Microsoft’s next ambition is to move into the second spot ahead of Apple, and that’s not so crazy as you might think. Mobile developers are expressing more interest in beginning to build apps for Windows Phone than any other platform.

Losers included BlackBerry, down 11.7 percent, Linux, down 35.7 percent, and Symbian, down 92.3 percent. New Linux-based platforms such as Tizen, SailFish, and Firefox might push its number back into the positive, but whether BlackBerry can do the same is an open question.

The real question for Apple is whether 13.2 percent iPhone market share is the floor, or if there’s a new basement beneath. That something that new models — and Apple’s revamped mobile operating system — will be pivotal in determining.

“What remains to be seen is how the new iOS 7 will be received once it reaches the market later this year, as much of the look and feel of the user interface has been revamped,” the IDC said.