The latest figures come from IDC, which puts together these estimates every quarter. Here is the breakdown for the full year: 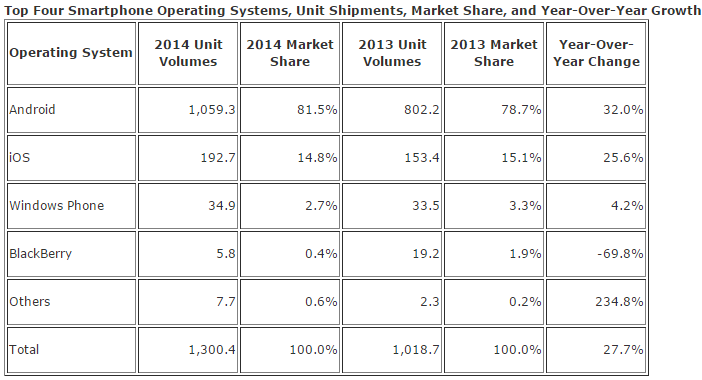 Above: Volume units are in millions.

Google’s mobile operating system remained the clear leader in 2014, pushing past the 1 billion unit mark for the first time. This was a significant milestone in itself, but also because it meant that total Android volumes in 2014 beat total smartphone shipments in 2013. Samsung retained the leadership position “by a wide margin,” shipping more than the next five vendors combined, but its total volumes for the year remained essentially flat as Asian vendors (including Huawei, Lenovo and its subsidiary Motorola, LG Electronics, Xiaomi, and ZTE) took up the task of fueling growth for Android.

Apple’s mobile operating system, meanwhile, saw its market share decline slightly “even as volumes reached a new record and grew at nearly the same pace as the overall smartphone market,” IDC said. Strong demand for Apple’s new and larger iPhones as well as “the reception they had within key markets” kept the company going strong.

The remaining scraps were left to Microsoft and BlackBerry. Remember: There’s only 3.7 percent to fight over.

Windows Phone had the smallest year-over-year increase among the leading operating systems, growing just 4.2 percent. Not only was this “well below the overall market,” but it’s a stark contrast to 2013, when the OS posted the largest increase for both the quarter and the year. With the acquisition of Nokia completed in the spring of 2014, Microsoft relied on entry-level Lumia devices to maintain its position in the market, as well as partners HTC and Samsung in the high end of the market. That said, even if Windows 10 can turn the ship around, that’s unlikely to happen in 2015.

Believe it or not, BlackBerry did worse. It posted the only year-over-year decline among the leading operating systems, falling 69.8 percent from 2013 levels. If the BlackBerry Passport and BlackBerry Classic do indeed ship the 10 million units in 2015 that chief executive John Chen estimates, however, the company will see growth again.

The same question keeps coming up every year: How long will the Android and iOS duopoly last? We suspect it may have peaked in 2014, but it’s naturally too early to say for certain.

Android outpaced the overall smartphone market in all of 2014, while iOS beat the market in Q4 2014. Those are trends that are very hard to break, though it won’t just be Microsoft and BlackBerry trying this year: Mozilla (with Firefox OS) and Samsung (with Tizen) will be doing their best to make sure the 96.3 percent figure doesn’t go higher.