Apple may still own the smartphone throne in the U.S., but even with 48 million iPhones sold last quarter, Samsung continues to dominate the worldwide market. In Q3 2015, the South Korean company shipped more smartphones than any other company. In fact, Samsung out-shipped the next two smartphone makers, Apple and Huawei, combined.

Smartphone vendors shipped a total of 355.2 million smartphones worldwide last quarter. Not only is this figure up 6.8 percent from the 332.6 million units in Q3 2015, it’s the second highest quarterly total on record. The latest quarterly figures come from IDC, which summarized its findings in the following chart: 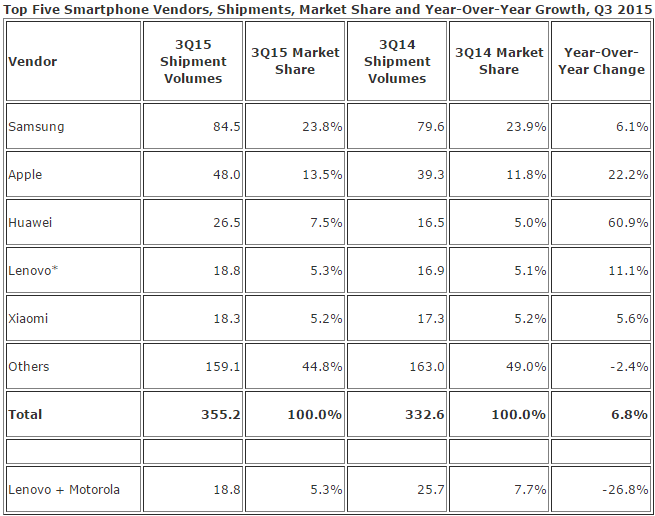 As you can see above, Samsung’s market share actually decreased by 0.1 percentage points (from 23.9 percent to 23.8 percent), despite shipping more smartphones (84.5 million). That’s more than a fifth of the market, though just a few years ago Samsung controlled one third.

During the quarter, Samsung remained focused on premium handsets with the launch of the Galaxy S6 edge+ and the Galaxy Note 5. Also, sub-$200 devices drove a majority of shipments in many key emerging markets.

Huawei grabbed another 2.5 points (to 7.5 percent), Lenovo gained 0.2 points (to 5.3 percent), and Xiaomi stayed flat at 5.2 percent. While the Android and iOS duopoly doesn’t look like it’s going away anytime soon, the Samsung-Apple duopoly is slowly eroding.

The Chinese trio accounted for 18 percent of the pie. Once again, that’s more than Apple, and very close to Samsung. Last year, their combined share was still well behind Apple. Everyone will be looking to Q4 2015 to see whether Samsung and Apple can maintain their positions.

“The third quarter placed a substantial emphasis on flagship devices as vendors tried to outclass each other in both features and design,” IDC research manager Anthony Scarsella said in a statement. “New flagship models translated to fiercer competition at the high-end for most players as many will try to challenge both Samsung and Apple for a place among the elite. However, despite the glitz and glamour at the high-end, we still expect the bulk of volume and growth to once again sprout from low to mid-range handsets, particularly in emerging markets.”