Apple is the new global smartphone king, surpassing rival Samsung, if only for one quarter. For those getting a big déjà vu, this is indeed a trend: Samsung dominates the first three quarters in the year, and Apple settles for the fourth.

Smartphone vendors shipped a total of 430.7 million smartphones worldwide in Q4 2017, down 6.3 percent from the 403.5 million units in Q4 2016. Of the top five (Apple, Samsung, Huawei, Xiaomi, and Oppo), only one (Xiaomi) managed to ship more units. That said, Apple and Samsung both still gained share overall, thanks to smaller players shipping even fewer units. The Q4 2017 figures come from IDC (though Strategy Analytics agrees with the poor quarter), which summarized its findings in the following chart: 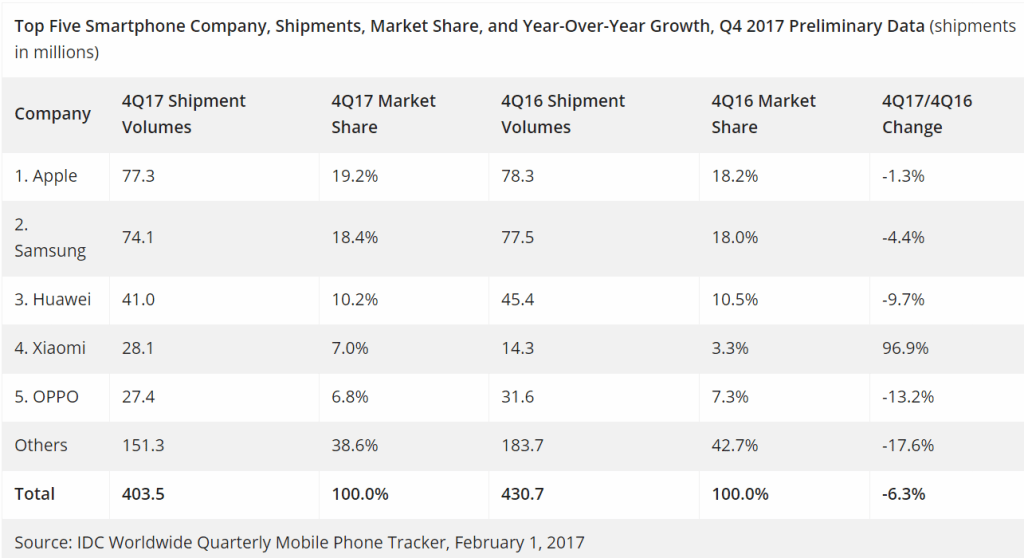 As you can see above, Apple’s market share grew 1.0 percentage points (from 18.2 percent to 19.2 percent), despite fewer iPhones (down 1.0 million). The iPhone 8, iPhone 8 Plus, and iPhone X sold well, but they didn’t set any records.

Samsung’s market share inched up 0.4 percentage points (from 18.0 percent to 18.4 percent) as it shipped 3.4 million fewer smartphones (74.1 million). Samsung typically owns about a fifth of the market, but it struggles to keep that up in the fourth quarter. The Galaxy S8, Galaxy S8+, and Galaxy Note8 helped Samsung survive after the the Note7 fiasco. The hype around this year’s phones is already mounting.

Huawei slipped 0.3 points (to 10.2 percent), Oppo jumped 3.7 points (to 7.0 percent), and Vivo fell 0.5 points (to 6.8 percent). The Samsung-Apple duopoly is continuing to erode, although the Chinese trio didn’t have the best quarter.

Huawei is particularly worth watching as its third place position appears to be solidifying. Double-digit share is now no longer surprising to see, but it’s not clear where the company will go from there. The Chinese firm’s U.S. expansion plans are looking less and less likely as neither AT&T nor Verizon are playing ball, thanks to government pressure.

If you look at the full 2017 numbers, you’ll see the top five smartphone makers are really not that far off from each other. This is the closest they’ve ever been to each other, in terms of market share: 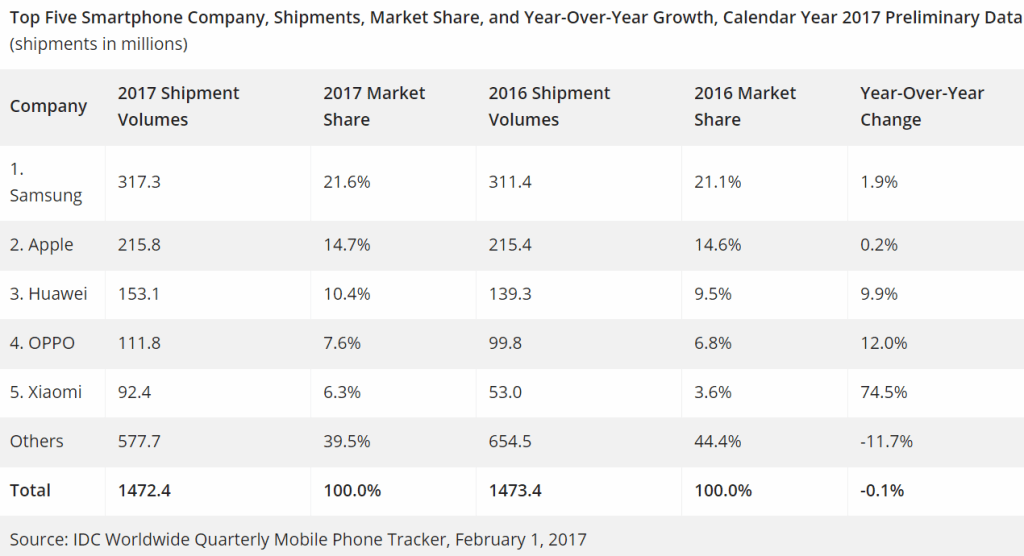 As competition heats up, expect more consolidation. Chinese companies continue to offer value-packed devices with the latest features at a fraction of the cost, while market leaders Apple and Samsung are trying to respond with multiple offerings.

“In the presence of ultra-high-end flagships, the still high-priced flagships from the previous generation seemed far more palatable to consumers in 2017,” IDC research analyst Jitesh Ubrani said in a statement. “Many high-profile companies offered their widest product portfolio ever in hopes of capturing a greater audience. Meanwhile, brands outside the top 5 struggled to maintain momentum as value brands such as Honor, Vivo, Xiaomi, and OPPO offered incredible competition at the low end, and brands like Apple, Samsung, and Huawei maintained their stronghold on the high end.”