It wasn’t just a blip.

For the first time in seven years, Samsung and Apple were not the top two smartphone makers — Huawei overtook Apple in Q2 2018. And today we learned that the Chinese company beat its U.S counterpart again, in Q3 2018.

Smartphone vendors shipped a total of 355.2 million smartphones worldwide in Q3 2018, down 6 percent from the 377.8 million units in Q3 2017. Of the top five, only Samsung and Oppo shipped fewer units than the year before. The Q3 2018 figures come from IDC (though Strategy Analytics agrees that Huawei maintained its lead over Apple), which summarized its findings in the following chart: 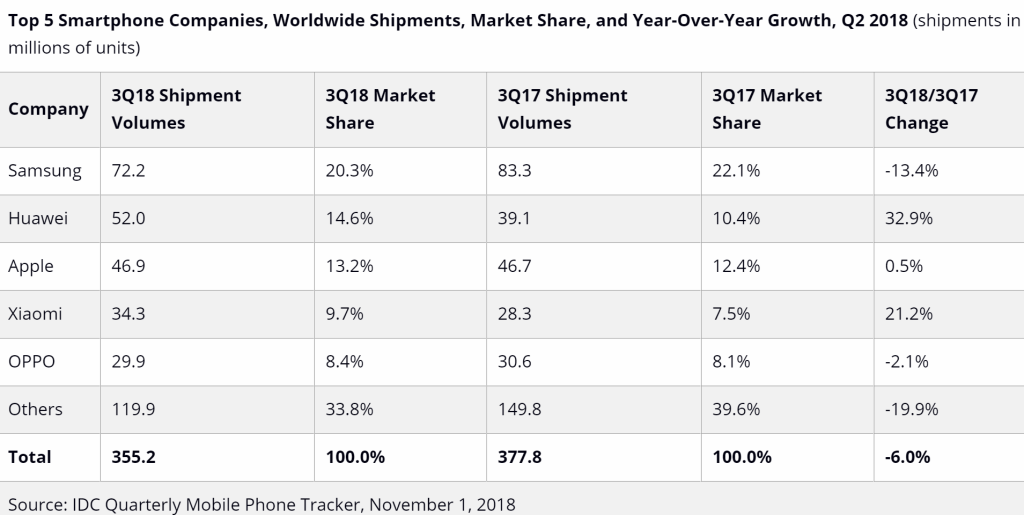 As you can see above, Samsung lost 1.8 percentage points (from 22.1 percent to 20.3 percent) as it shipped 11.1 million fewer smartphones (72.2 million). Samsung typically owns about a fifth of the market, and that remains unchanged. It looks like the Galaxy Note9 was not able to make up the ground lost by Galaxy S9 and Galaxy S9+, but more importantly, Samsung is losing at the mid-range and low-end.

Huawei gained a whopping 4.2 points, hitting 14.6 percent market share. If you’re going to stay above Apple, you need the volume. Huawei is still closer to Apple than it is to Samsung, but if it can keep the momentum going, the Chinese company will have successfully dismantled the duopoly held by its two biggest competitors. Huawei’s P20 and P20 Pro continue to find strong demand, as do its Honor models sold via online channels. All eyes are now on the newly released Mate 20 and Mate 20 Pro.

Apple’s share, meanwhile, grew 0.8 points (from 12.4 percent to 13.2 percent), thanks to the iPhone XS. The iPhone XR, which only arrived in Q4, is also expected to sell well.

Xiaomi jumped 2.2 points (to 9.7 percent), while Oppo gained 0.3 points (to 8.4 percent). Those two are battling it out for fourth just as closely as Apple and Huawei now are for second.

Companies outside of the top five together lost 5.8 points. The top five leaders are increasingly dominating, and it wouldn’t surprise me if they all soon held double-digit shares of the pie. Consumers no longer seem to be as obsessed with upgrading to the latest and greatest, but when they do, they’re increasingly considering the Chinese trio instead of the de facto Samsung or Apple options.

Next quarter could be particularly interesting. Samsung typically dominates the first three quarters of the year, while Apple wins the fourth quarter. Will Q4 2018 follow the usual order (Apple, Samsung, Huawei) or will we see another shakeup? And, more importantly, what will the overall numbers show for the full year?

“The race at the top of the market continues to be a heated one, as Huawei once again slipped past Apple to the second position,” IDC research manager Anthony Scarsella said in a statement. “Although Huawei may have beat out Apple in Q3, the holiday quarter could have Apple as the market leader, thanks to the launch of three new bezel-less devices. No matter who leads in the overall market, the holiday quarter should be an exciting one with a wide selection of new flagship devices available. With the new iPhones, Mate 20, Pixel 3, V40, Note 9, and OnePlus 6T, we can expect consumers will have a plethora of options when upgrade time approaches. The vast selection of high-priced handsets should move ASPs in a positive direction come next quarter.”