Smartphone vendors shipped a total of 334.9 million smartphones worldwide last quarter. This figure is up just 0.2 percent from the 334.3 million units in Q1 2015, marking the smallest year-over-year growth on record. We saw hints of this in yesterday’s Apple earnings report, when the company reported an iPhone sales drop for the first time.

Despite the poor state of the worldwide smartphone market, Samsung continues to dominate. In Q1 2016, the South Korean company once again shipped more smartphones than any other vendor. In fact, Samsung out-shipped the next two smartphone makers — Apple and Huawei — combined. The latest quarterly figures come from IDC, which summarized its findings in the following chart: 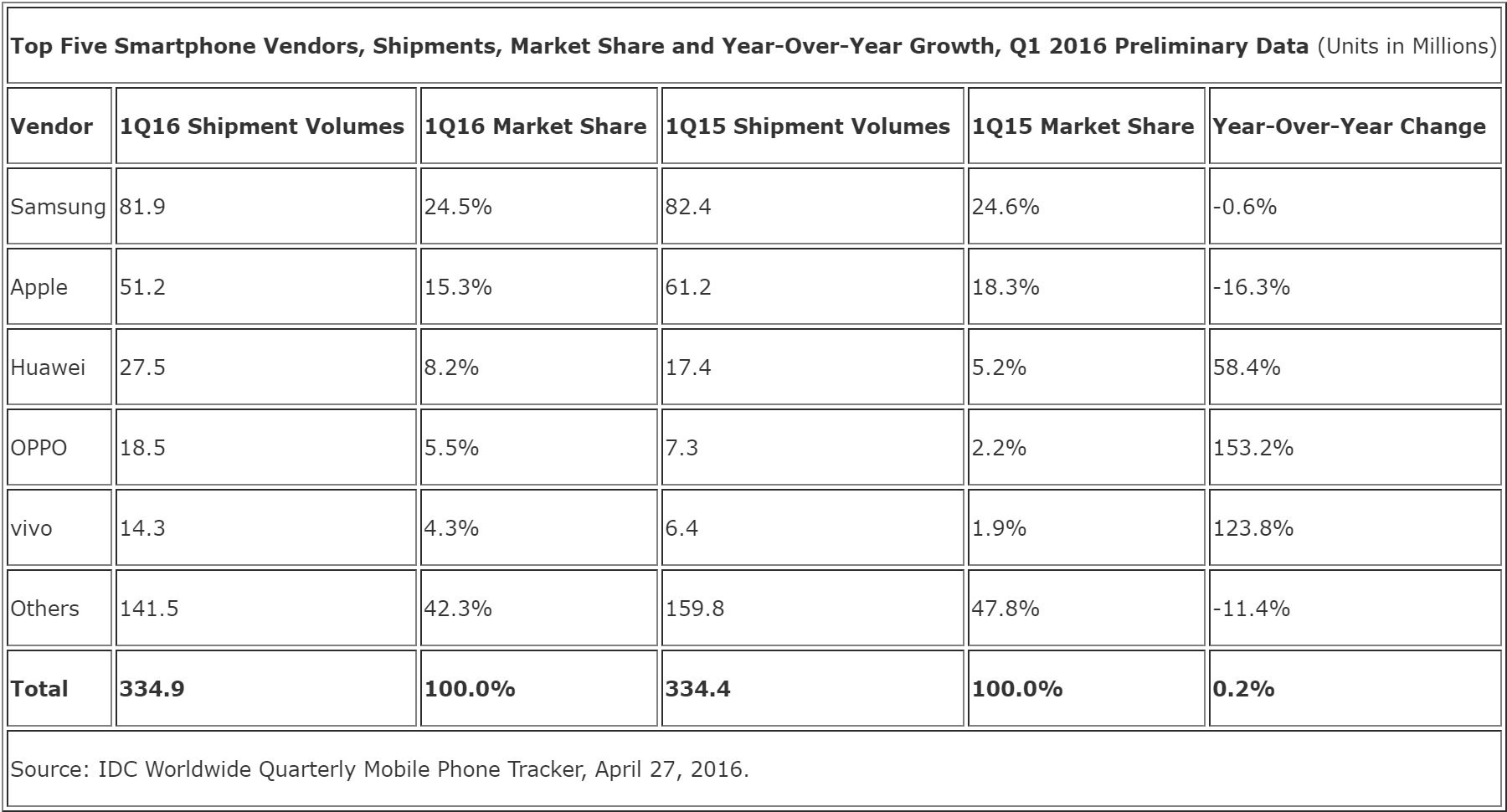 As you can see above, Samsung’s market share actually decreased by 0.1 percentage points (from 24.6 percent to 24.5 percent), and it shipped fewer smartphones (81.9 million). That still represents almost a fourth of the market, though just a few years ago Samsung controlled one-third. IDC estimates that the new Galaxy S7 and Galaxy S7 Edge “sold vigorously” in March, helped by numerous carrier promotions that pushed volume. In emerging markets, Samsung performed well with its more affordable J Series.

Apple fell 3.0 points (to 15.3 percent), the first year-over-year decline for the company in Q1. The iPhone 6s and iPhone 6s Plus failed to deliver, which Apple saw coming. All eyes are on the cheaper iPhone SE and whether it can buoy sales next quarter.

It’s certainly interesting to see lesser-known Chinese brands Oppo and Vivo push out previous fourth and fifth place players Lenovo and Xiaomi, respectively. China’s smartphone market is maturing (the average selling price for a smartphone rose from $207 in 2013 to $257 in 2015), and competition is fierce.

“Outside of China, many of these brands are virtually unknown and the ability of these rapidly growing Chinese vendors to gain entry into mature markets such as the United States and Western Europe will be essential if they have aspirations of catching Apple or Samsung at the top,” Anthony Scarsella, research manager with IDC’s mobile phone team, said in a statement. “While Huawei is furthest along in terms of international recognition, selling equally impressive volumes outside of China remains a challenge for many of these brands, whether it is Xiaomi, Lenovo, OPPO, or vivo. Their ability to drive local growth no longer applies when it comes to international expansion, where premium branding quickly turns to price competition.”