The tablet market is still in decline.

In Q4 2015, the top five vendors accounted for 54.2 percent of the market, up from 51.0 percent a year ago. But only Amazon and Huawei managed to grow their pie slices year over year: 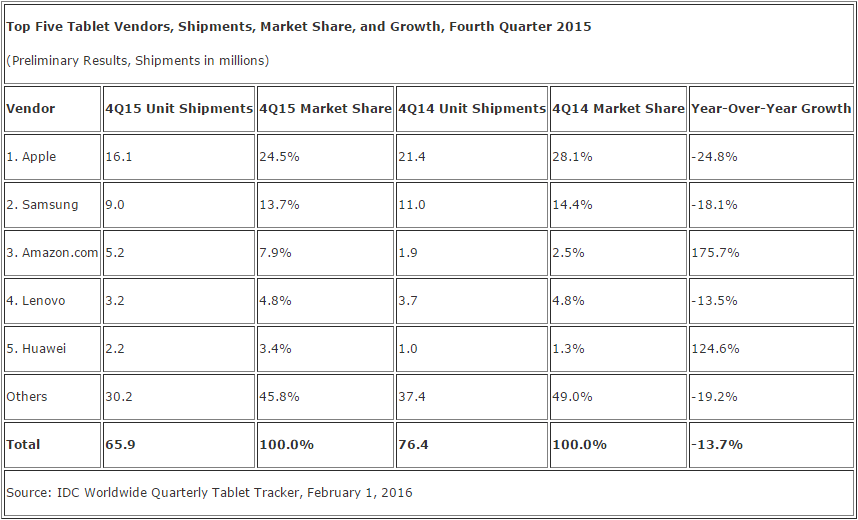 In the quarter, Apple and Samsung both saw their numbers fall, with Amazon and Huawei picking up the scraps. While Amazon’s 175.7 percent growth may seem impressive, it only shows up in the top five tablet vendors for Q4, as this is the company’s most important quarter due to the holiday season.

Throughout the year, the top three tablet makers maintained their positions: Apple was first, Samsung took second, and Lenovo settled for third. In 2015, the top five vendors accounted for 52.1 percent of the market, down from 56.2 percent a year ago: 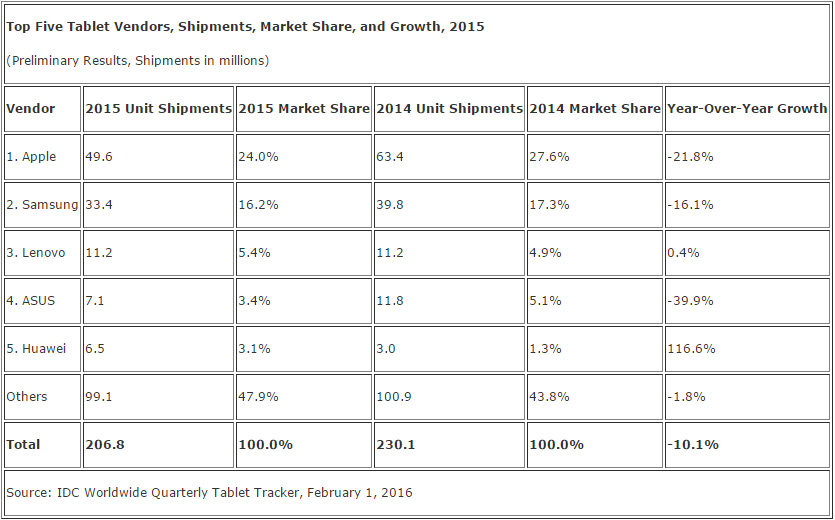 Apple dropped 3.6 points to 24.5 percent market share in Q4 2015 and also fell 3.6 points to 24.0 percent in all of 2015. This means Apple grabbed less than a quarter of all tablets, shipping fewer units in both cases. According to IDC, the launch of the iPad Pro beat Microsoft’s Surface Pro and helped the company curb the decline in iPad revenues.

Samsung slipped 0.7 points to 13.7 percent in Q4 2015 and 1.1 points to 16.2 percent in all of 2015. Because of the smaller drop for Samsung, the gap between the South Korean company and the U.S. company continued to shrink. IDC believes that because Samsung has the deepest tablet portfolio (multiple price points and screen sizes), it is in the best position to handle the transition to detachable tablets this year.

IDC argues that the biggest trend to watch for in 2016 is the transition towards detachable devices. Indeed, pure slate tablets experienced their greatest annual decline to date of 21.1 percent, while detachable tablets more than doubled their shipments since the fourth quarter of last year.

“This quarter was unique as we had new detachables in the market from all three of the major platform players,” IDC senior research analyst Jitesh Ubrani said in a statement. “Despite lukewarm reviews, the iPad Pro was the clear winner this season as it was the top selling detachable, surpassing notable entries from Microsoft and other PC vendors. It’s also important to note that the transition towards detachable tablets has presented positive opportunities for both Apple and Microsoft. However, Google’s recent foray into this space has been rather lackluster as the Android platform will require a lot more refinement to achieve any measurable success.”