To make matters worse, while 2017 quarters only saw single-digit declines, Q1 2018 and now Q2 2018 are in the double digits. The estimates come from IDC, which counts both slate form factors and detachables, meaning tablets with keyboards included. Apple maintained its top spot for the quarter, with Samsung and Huawei rounding out the top three. The top five vendors accounted for 71.2 percent of the market, up from 65.8 percent last year: 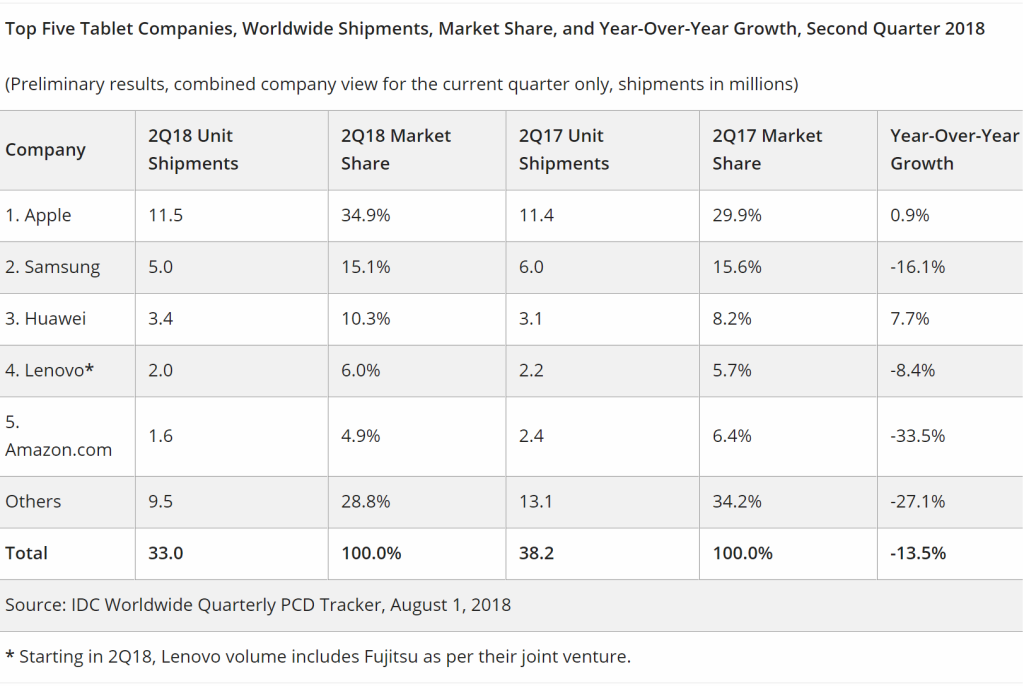 Apple’s shipment numbers were up by only 100,000, but that still translates into a 5.0 percentage point gain (from 29.9 percent to 34.9 percent), as the overall tablet market declined so much. The company was able to maintain its lead partly thanks to this year’s iPad, which arrived at the end of the quarter.

Samsung shipped 1 million fewer tablets than in the quarter a year ago and ended up losing 0.5 points of market share (from 15.6 percent to 15.1 percent). The company saw both slate and detachable shipments decline, though yesterday it announced the new Galaxy Tab S4 and Galaxy Tab A 10.5 that may help it rebound a bit.

2018 is looking very similar to previous years. The replacement cycle for tablets is still closer to that of traditional PCs than smartphones, and detachable tablets is the only category seeing growth. The real question now is: Can Microsoft’s Surface Go or the rise of Chrome OS tablets turn things around?

“The detachable market is at a crucial stage as it has been driven primarily by premium products from Microsoft and Apple and growth has slowed in recent months,” IDC research analyst Jitesh Ubrani said in a statement. “Though consumers and businesses alike have shown interest in the detachable form factor, those operating on tighter budgets have had very few options available to them and hence some have opted for traditional PCs. However, with the launch of the Surface Go, Chrome OS-based detachables, and hopefully a more affordable iPad Pro in the future, the detachable category still has a bright future, provided the performance and software lines up with users’ expectations.”