The tablet market has now been in decline for eight quarters in a row. Q3 2016 saw a 14.7 percent year-over-year decline: 43 million units shipped worldwide, compared to 50.5 million units in the same quarter last year. The estimates are provided by IDC, which counts both slate and detachable form factors, meaning tablets with keyboards are included.

The top two tablet makers maintained their positions: Apple was first and Samsung second. Amazon also seems to have solidified its spot in third place. The top five vendors accounted for 55.8 percent of the market, up from 46.8 percent last year, and nobody managed to ship more than 10 million units: 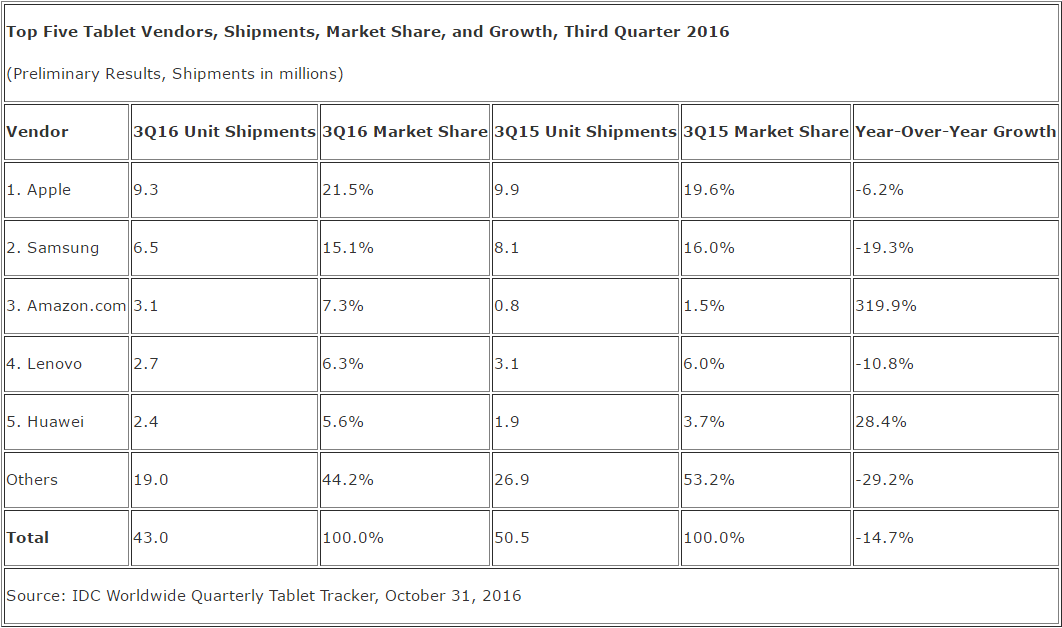 Both Apple and Samsung saw their shipment numbers fall once again, though Apple gained share, up 1.9 points to 21.5 percent market share. Samsung slipped 0.9 points to 15.1 percent, but still shipped more than double the units than those behind it.

Because of the larger drop for Samsung, the gap between the South Korean company and the U.S. company increased. This is unique to 2016, as in the previous year the gap had been shrinking. The reversal can likely be attributed to Apple’s iPad Pro lineup, though Apple is still selling fewer and fewer iPads overall.

This is the third time that Amazon has placed in the top five in a non-Q4 quarter — typically, the company only shows up due to the holiday season. The company’s low-cost Fire tablet has propelled the company to the top, though the growth shown is skewed by the fact that IDC did not include the 6-inch tablets offered by Amazon in Q3 2015.

Lenovo shipped fewer units but grew 0.3 points to 6.3 percent share, while Huawei shipped more units and gained 1.9 points to 5.6 percent. Both companies have maintained their positions for many quarters now and don’t look like they will be displaced.

Microsoft is still missing from the list. And given that the company only unveiled the Surface Book i7 this year, we doubt that will be changing anytime soon. But pursuing the premium segment for tablets is the right strategy.

“Unfortunately, many low-cost detachables also deliver a low-cost experience,” IDC research analyst Jitesh Ubrani said in a statement. “The race to the bottom is something we have already experienced with slates and it may prove detrimental to the market in the long run as detachables could easily be seen as disposable devices rather than potential PC replacements.”