The tablet market has now been in decline for a full year. Q3 2015 is the fourth straight quarter in a row to see a decrease year-over-year: 48.7 million units shipped worldwide, down 11.2 percent from the 55.7 million units that shipped the same quarter last year, according to market research firm IDC.

The top three tablet makers maintained their positions: Apple was first, Samsung took second, and Lenovo settled for third. IDC blamed the decline on “mature markets like North America, Western Europe, and Asia/Pacific [having] well past 100 million active tablets per region.” The top five vendors accounted for 50.8 percent of the market, down from 52.4 percent last year: 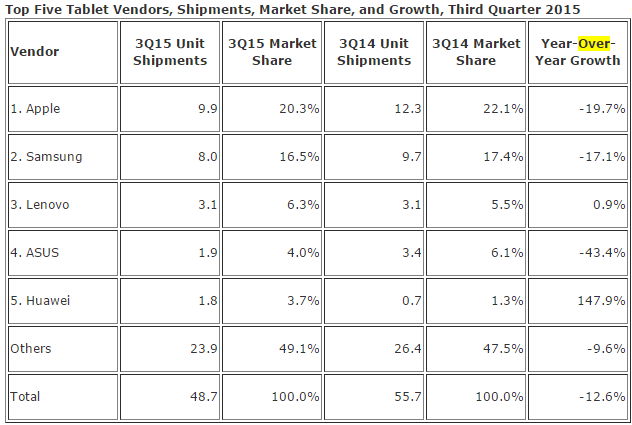 Both Apple and Samsung saw their respective numbers fall, as competitors swooped in to pick up the scraps. Apple dropped 1.8 points to 20.3 percent market share, meaning it grabbed less than a quarter of all tablets this past quarter, thanks to shipping fewer units. Samsung slipped 0.9 points to 16.5 percent, and also shipped fewer units. Because of the smaller drop for Samsung, the gap between the South Korean company and the U.S. company continued to shrink.

Lenovo managed to gain 0.9 points and hit 6.3 percent market share. Asus dropped 2.1 points to 4.0 percent, and Huawei managed to jump 2.4 points to 3.7 percent. Huawei entered the top five ranking for the first time in Q2, and so far it’s managed to hold on.

“We continue to get feedback that tablet users are holding onto devices upwards of four years,” IDC program director Ryan Reith said in a statement. “We believe the traditional slate tablet has a place in the personal computing world. However, as the smartphone installed base continues to grow and the devices get bigger and more capable, the need for smaller form factor slate tablets becomes less clear. With shipment volumes slowing over four consecutive quarters, the market appears to be in transition.”

So far, Windows 10 has not managed to help the situation. That said, thanks to Microsoft’s Surface, companies are responding to the market’s decline with their own detachable tablet solutions. These devices only claim a single digit percentage of the overall tablet market, but IDC expects their share to “increase dramatically” over the next 18 months. It will take a few quarters, but we’ll know soon enough whether the tablet market can rebound.