The tablet market continues to grow, albeit not as quickly as before. Q4 2013 saw 53.8 million units ship worldwide, up 11.5 percent from 47.6 million the same quarter last year according to market research firm IDC. 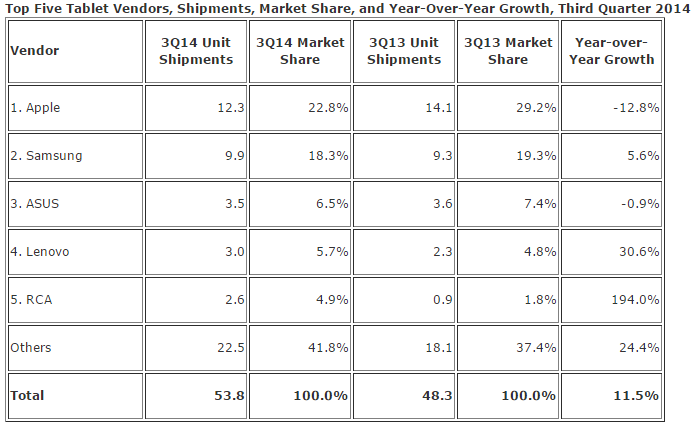 Apple dropped to 22.8 percent market share, meaning it grabbed less than a quarter of all sales as it shipped fewer units. Samsung slipped to 18.3 percent, though it actually shipped more units, and despite its percentage loss year-over-year, it continued to close in on its biggest rival.

Asus lost share but managed to maintain the third-place position it had in Q3 2013, largely thanks to its Windows-based 2-in-1 devices.

Lenovo, on the other hand, saw more than 30 percent growth, largely thanks to strength in emerging markets, while RCA surprised the market and managed to enter the top five, mainly due to distribution deals with some of the largest retailers just in time for the back-to-school season.

The big question for these top five companies will be how they handle the high demand of Black Friday and the upcoming holiday season. Last year, the top five in Q4 were Apple, Samsung, Amazon, Asus, and Lenovo.

In Q4 2014, Amazon will likely show up once again, as the company’s figures are always very seasonal. Apple and Samsung will fight for first place, while Asus and Lenovo will battle for fourth.

Competitors like RCA will find it difficult to muscle in. But their presence in the top five won’t be completely out of the question. This past quarter’s results showed us that more and more tablets are still selling, and the small players are successfully stealing share from their larger counterparts, mostly by offering cheaper alternatives.

Yet this can’t last forever, as IDC Senior Research Analyst Jitesh Ubrani notes in his statement. “Although the low-cost vendors are moving a lot of volume, the top vendors, like Apple, continue to rake in the dollars. A sub-$100 tablet simply isn’t sustainable — Apple knows this — and it’s likely the reason they aren’t concerned with market share erosion.”

As tablet shipment growth slows, small players will eventually be pushed out. In the meantime, however, the big players are losing sales to cheaper devices.