It has finally happened: Fitbit has shed enough market share to lose its first place spot in wearables. The little guy held out against large tech companies for a long time, but in Q1 2017, Xiaomi took first place, Apple came in at very close second, and Fitbit came in third. Until now, Fitbit was first every single quarter.

Mobile companies shipped a total of 24.7 million wearables worldwide last quarter. That number is up 17.9 percent from the 20.9 million units shipped in Q1 2016. The latest figures come from IDC, which found that all five of the top companies managed to ship at least a million units: 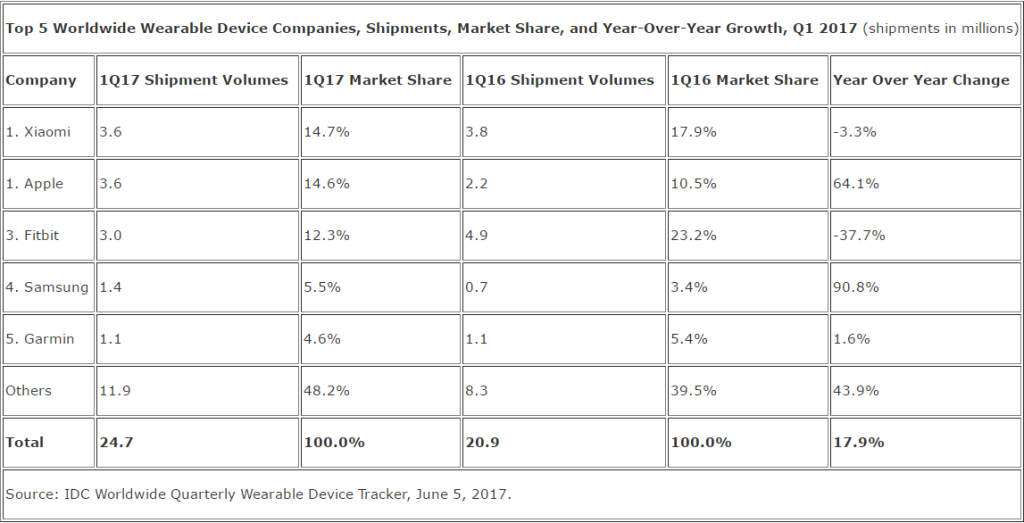 As you can see above, Fitbit’s market share dropped 10.9 percentage points (from 23.2 percent to 12.3 percent), as the company shipped 1.9 million fewer devices (3 million total). This is likely due to the company remaining heavily focused on the U.S., a market that is quickly approaching saturation for fitness trackers, and the fact its first smartwatch is still missing.

Xiaomi also lost market share, down 3.2 points (from 17.9 percent to 14.7 percent) after shipping 200,000 fewer units (3.6 million total). But the Chinese company has kept up its low-cost strategy with inexpensive fitness trackers and managed to steal first place despite 96 percent of its shipment volume remaining in China.

Apple meanwhile gained 4.1 points (from 10.5 percent to 14.6 percent), thanks to shipping an additional 1.4 million units (3.6 million total). Q4 2016 was the company’s best quarter ever in the wearables market, and Apple has continued to ride the wave into 2017. IDC notes that Apple saw sustained demand nearly two quarters after the Series 1 and Series 2 versions launched and that it recorded the second highest year-over-year growth among the leading companies.

Samsung gained 2.1 points to 5.5 percent while Garmin slipped 0.8 points to 4.6 percent. Both are a far cry from the double-digit percentage shares of their competitors.

Last year, Fitbit, Xiaomi, and Apple were the leaders, in that order, while Garmin and Samsung held on to remain in the top five. This year is already shaking out differently, and the next few quarters are bound to have big winners and losers.

“Fitbit finds itself in the midst of a transformation as user tastes evolve from fitness bands to watches and other products,” IDC research manager Ramon Llamas said in a statement. “This allowed Xiaomi to throttle up on its inexpensive devices within the China market and for Apple to leverage its position as the leading smartwatch provider worldwide. Now that Xiaomi and Apple have supplanted Fitbit, the next question is whether they will be able to maintain their position. However, by no means should Fitbit be removed from the wearables conversation. With a user base of 50 million, a strong presence within corporate wellness, and assets that keep it top of mind for digital health, Fitbit is well positioned to move into new segments and markets.”

It’s important to remember that the wearables market remains very small, and it’s not clear where it’s headed. Vendors are pushing a wide variety of offerings, from fashion accessories to powerful devices.

There is a huge amount of data collected behind the scenes — a reminder of the immense potential the category has, even as consumers remain cautious. Companies are still at the stage of getting people used to wearing a device, with the next step being putting user data to good use.