Xiaomi’s growth in shipment volume to 6.9 million units is attributable to two factors: the Mi Band 3 and expansion beyond China, where the company has historically done most of its sales. In the third quarter, only 61 percent of Xiaomi’s shipments were to China, down from over 80 percent in typical quarters, as sales expanded further into Europe, India, and the Middle East/Africa territories — ideal areas for affordable wearables.

By contrast, Apple opted to release the Apple Watch Series 4 at a higher price than before and declined to drop an earlier Series 1 or Series 2 model down to the sub-$200 price point that might dramatically expand its marketshare. Even so, price reductions on the Series 3 enabled Apple’s shipments to jump 54 percent to 4.2 million units, though its 13.1 percent market share by shipment volume trailed Xiaomi’s 21.5 percent. 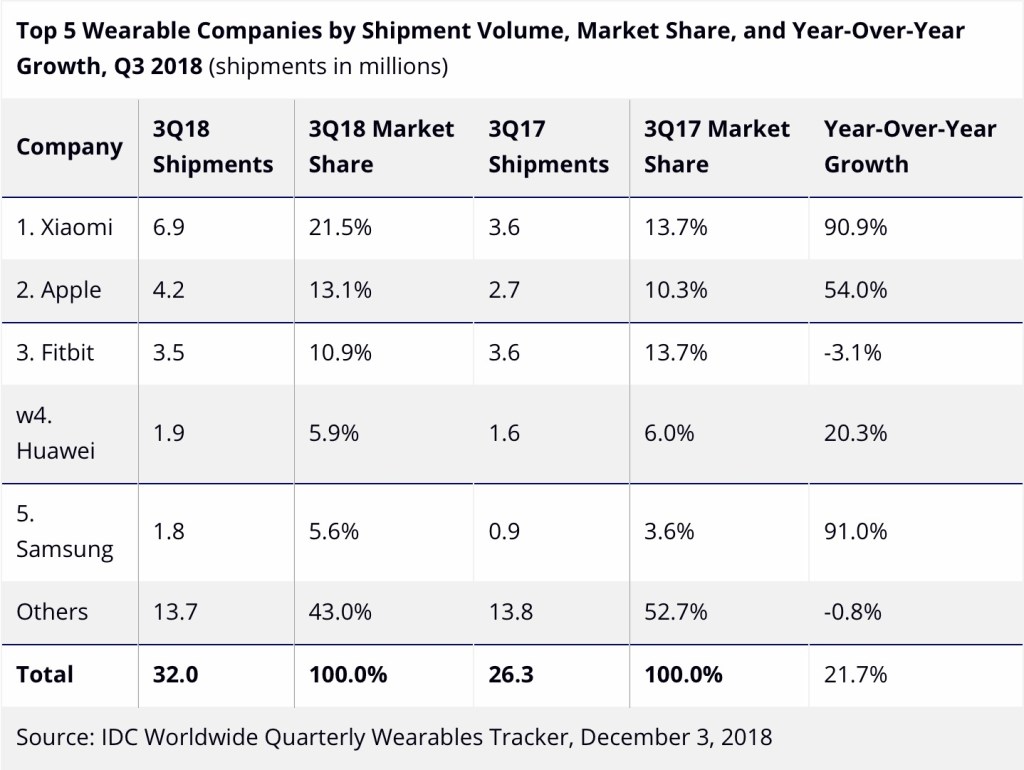 Fitbit saw a 3.1 percent decline in shipments from the year ago quarter, hitting 3.5 million units, thanks largely to sales of its Versa smartwatch. In fourth place, Huawei jumped over 20 percent to 1.9 million units, thanks to its TalkBand B5 combination Bluetooth earpieces and fitness trackers, while Samsung saw great 91 percent growth to 1.8 million units — due in part to the Galaxy Watch but more to aggressively priced Gear S3 and Gear Fit devices.

“Many of the new basic wearables include features like notifications or simple app integrations that bleed into smartwatch territory,” explained IDC senior analyst Jitesh Ubrani. “This has helped satiate consumer demand for more capable devices while also maintaining average selling prices in a market that faces plenty of downward pressure from low-cost vendors and declining smartwatch pricing.”

However, Ubrani suggests that Apple’s and Fitbit’s recent health initiatives, including those requiring regulatory approval, are creating a wall for smartwatch makers that smaller vendors of basic wearables will struggle to climb. IDC expects holiday growth will come from the large Chinese market, where there’s continued demand for basic wearables, while the slowing U.S. market will see demand for more fully featured premium wearables — both for new users and as replacements for old devices.